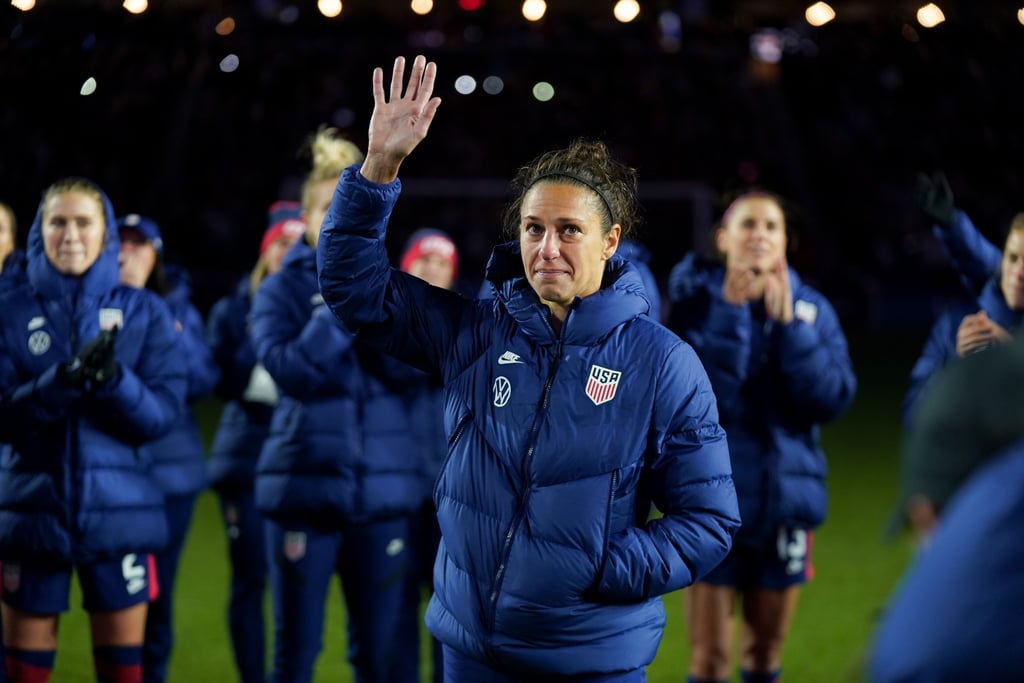 Carli Lloyd Says Goodbye to USWNT Football Career: "I Will Be Around Helping This Game Grow"

Carli Lloyd will finish out her career, spanning four Olympics and the second-most international appearances in women's football history, with NWSL club team Gotham FC this fall. But, an Oct. 26 match against South Korea marked the 39-year-old's last time in a USWNT uniform. She officially announced her retirement in August, and the New Jersey native admits it's hard to say goodbye.

At her final game, Lloyd spoke to her teammates and fans, assuring them, "You will not see me on the field, but you best believe that I will be around helping this game grow." See that full speech ahead. She gave her captain's armband to Megan Rapinoe and took off her cleats. She also removed her jersey to reveal a matching one with "Hollins" on the back for husband Brian Hollins.

Lindsey Horan (club team: Portland Thorns) will start wearing Lloyd's jersey number, 10, in 2022, and Lloyd noted in an Instagram post that she hopes Horan sports it with pride.

"You will not see me on the field, but you best believe that I will be around helping this game grow."@CarliLloyd signs off from her final game 👏❤️

Looking back at her 17-year professional career, Lloyd wrote in an honest Players' Tribune essay published on Oct. 26, "I've felt every emotion you can feel in this game. I've felt the highest highs, but I've also been sad, anxious, depressed, devastated, defeated. I've felt not worthy. I've felt misunderstood. I've felt everything." She added, "Eventually, this game will break you."

"You will not see me on the field, but you best believe that I will be around helping this game grow."

But she fuelled onward still, sometimes through tears, and took opportunities given to her in stride. She pinpointed the moment that, from her perspective, put her success in motion: being subbed in for Shannon Boxx at the 2012 Olympics and proceeding to score two goals in the final match to secure gold for Team USA. Then there was that hat-trick in the 2015 FIFA Women's World Cup. "It's so surreal to me now when people show me all this love. When I see little girls holding up my jersey in the crowd. Or when I see people call me one of the GOATs, one of the legends of this game. A decade ago, I was so far away from that," Lloyd wrote.

The dual two-time Olympic and World Cup gold medalist expressed how difficult these years have been — no one realises how much players sacrifice, how much she has sacrificed — but that she'd do it all again.

Keep reading for some emotional farewell photos and more reflection from Lloyd herself.

Related:
"Do Not Ignore This": USWNT Stars Speak Out as NWSL Abuse Allegations Come to Light
Previous Next Start Slideshow
Carli LloydUSWNTAthletesSportsFootball