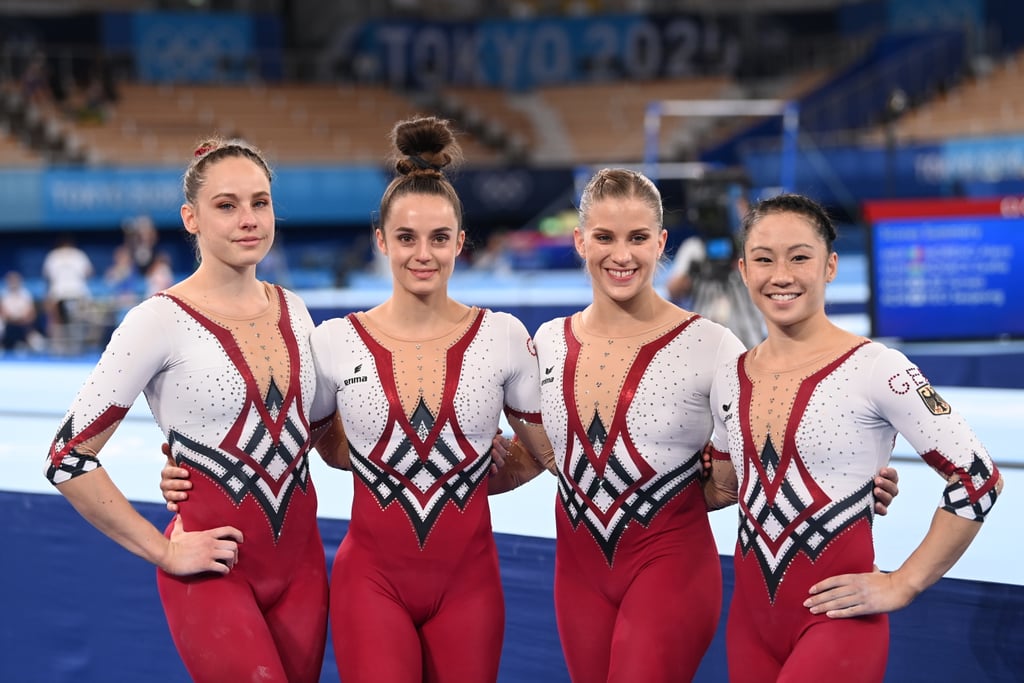 The German women's artistic gymnastics team officially kicked off its Olympic experience in Tokyo wearing full-length unitards. The women are taking a stand against sexualization in the sport and putting an emphasise on the choice to choose comfort. The four-person squad of Sarah Voss, three-time Olympians Elisabeth Seitz and Kim Bui, and two-time Olympian Pauline Schäfer wore the long-legged and long-sleeved uniforms during the preliminary round of competition on 25 July that determined the teams and individuals qualifying through to the finals.

These women debuted a different set of unitards at their podium training earlier this week. "We wanted to show that every woman, everybody, should decide what to wear," Seitz said, via Reuters. She continued, "That doesn't mean we don't want to wear the normal leotard anymore. It is a decision day by day, based on how we feel and what we want. On competition day, we will decide what to wear."

In the Code of Points for women's artistic gymnastics valid through the end of this year, the International Gymnastics Federation (FIG) writes that unitards are permitted. Specifically, the rules state that gymnasts "must wear a correct sportive non transparent leotard or unitard (one piece leotard with full length legs-hip to ankle), which must be of elegant design." It adds, "She may wear complete leg coverings of the same colour as that of the leotard; under or on top of the leotard."

Voss, Seitz, and Bui all showcased unitards at the 2021 European Gymnastics Championships this past April. Seitz wrote on Instagram (translated from German) at the time that she and her teammates set an example and wore "a new type of suit" as a symbol that some athletes "may feel uncomfortable or even sexualised in normal suits", referring to the leotards we've grown accustomed to seeing.

This isn't just a gymnastics issue; it spans across sports, as was made apparent just this week when Norway's women's beach handball team wore shorts instead of the required bikini bottoms at the European Beach Handball Championships. The women were fined for this breach in uniform.

Germany will not head to the women's gymnastics team final on 27 July, as the squad finished ninth. However, Seitz and Bui made it into 29 July's all-around final, and Seitz will also contend for a medal on bars on 1 Aug. Ahead, check out images of these statement-making Olympic unitards.