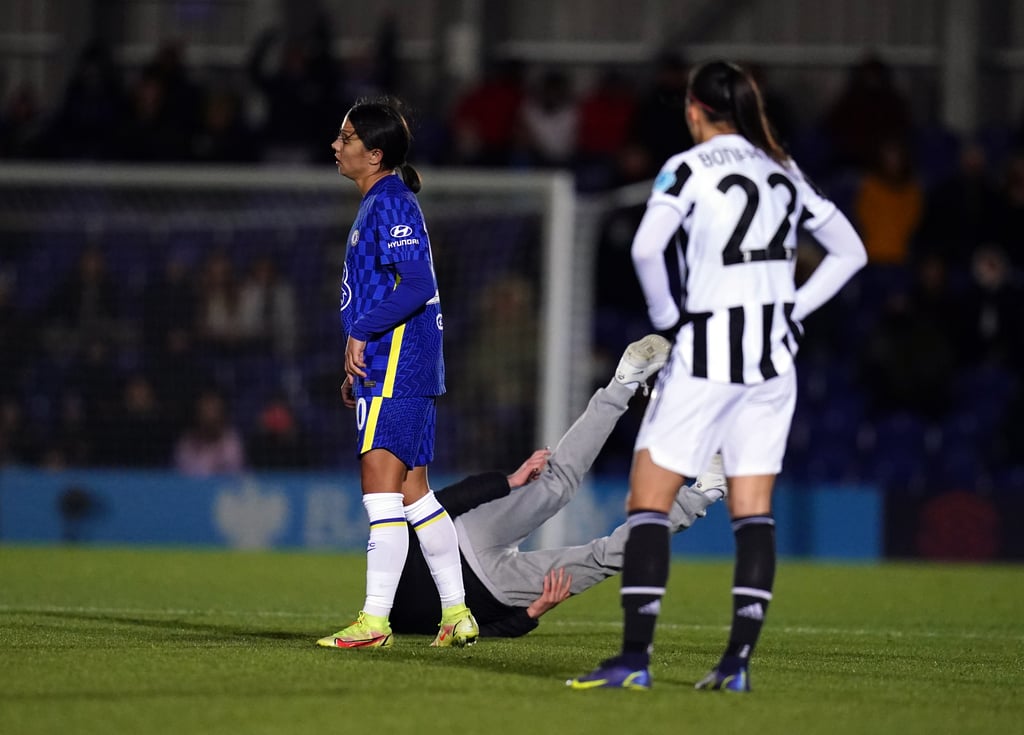 We're not here to condone violence, but when it comes to pitch invaders — at any sporting event, really, but especially at women's football games — let's just say they should know what they're in for. Usually, fans who run onto the field get taken down pretty quickly by security personnel, who take them away before they can do much more than make a fool out of themselves. But at the Chelsea-Juventus UWCL (UEFA Women's Champions League) game today, a pitch invader wasn't handled quickly enough for Chelsea star Sam Kerr's liking, so the Australian forward went ahead and took matters into her own hands.

A fan video of the event, which quickly went viral on Twitter, shows a man wandering around the field of play, phone out, with security nowhere to be seen. (A reporter on Twitter noted that the man apparently came onto the field to take selfies with players, because god forbid he asks them after the game like everyone else.) Players are standing around looking irritated at the delay (and, frankly, the disrespect), when Sam Kerr decided enough was enough. In the video, Kerr comes jogging into the frame, braces herself, and shoulders the man hard enough to send him to the ground, at which point security finally chase him away and the game continued to a 0-0 draw.

Related:
After a Year of Turmoil, the NWSL Crowns Its Champion: the Washington Spirit

First of all, let's just admit that it's satisfying to watch Kerr, one of the top players in the world, completely level this disrespectful man who decided that he and his selfies were more important than the game, the players, and all the fans there to watch. On the heels of that, though, are questions about the security presence at this game and why this random person was allowed to jog around the field in the first place, laughing and taking photos like he were allowed to be there. The star player probably should be your last line of defence against pitch invaders — they should never be able to get that dangerously close to the players to begin with.

And lastly, we'd like a word with the referee, who promptly gave Kerr a yellow card after decking this man like the hero she is. Ma'am?! He's not a player, he has no right to be on the field, and a firm shoulder to the chest is fully acceptable in this situation. We need justice for Sam Kerr, right after we thank her for doing what all of us secretly long to do to entitled men who disrespect women's sports.

See the full video (and, yes, the frame-by-frame photo breakdown) ahead.