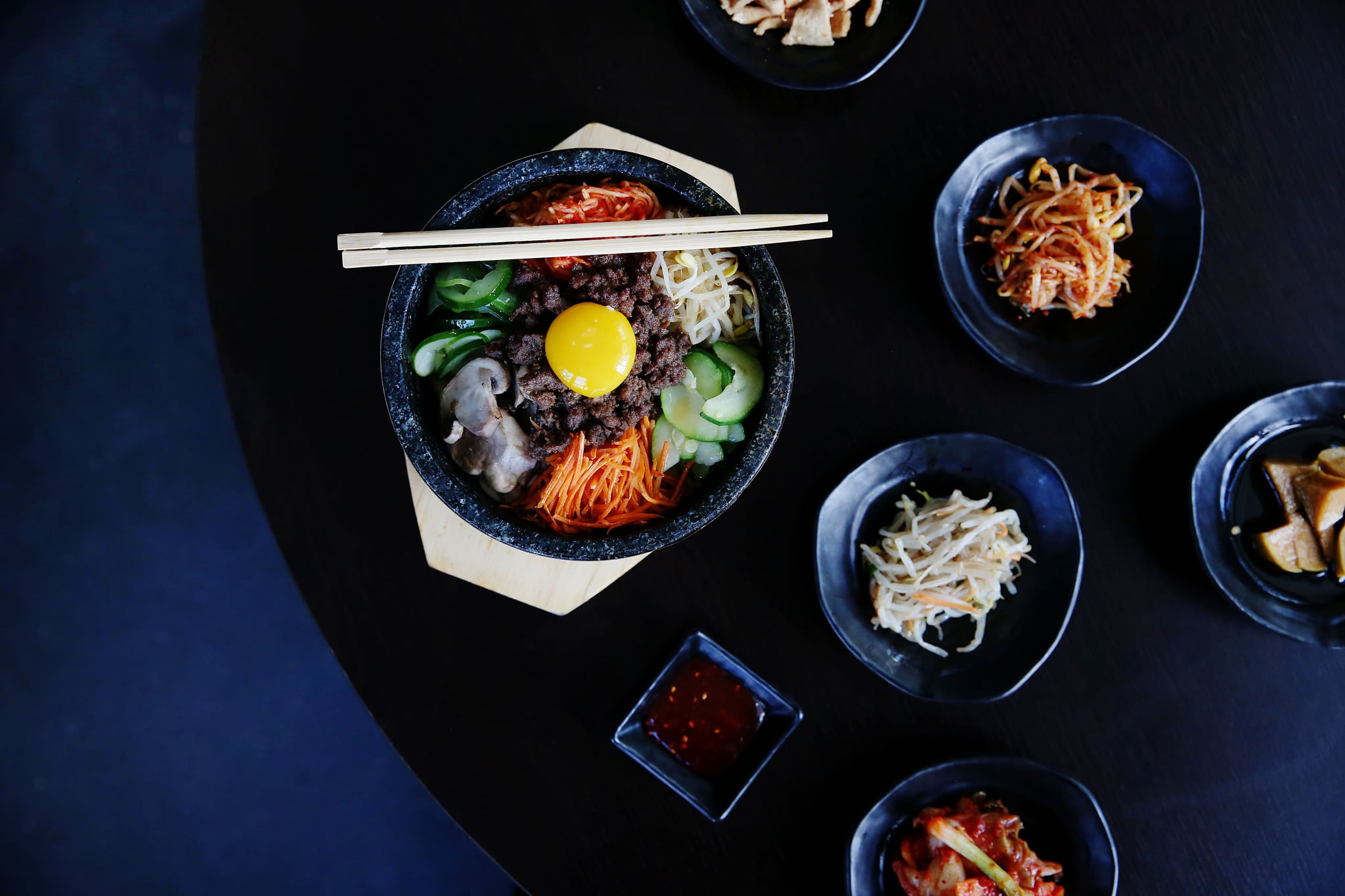 While appropriation of any part of culture is always a tricky subject — with critics arguing that appreciation is always the intention — the conversation surrounding culinary appropriation specifically is one that's often not taken seriously. "It's just food; it's not that deep," people might say. Yet for Asian Americans, and Asian American immigrants in particular, food is that deep. It's personal.

"When people take the food that you were made fun of and ostracized for, and start monetizing and profiting off of it, it's just a different level of pain."

Joanne Molinaro, who's better known as The Korean Vegan on TikTok and Instagram, said it best when explaining that there are two layers to why food might be so personal to our community — one that's common to all immigrant families, and another that only speaks to immigrants of colour. "When you've been uprooted from your native ancestry, you're told you have to assimilate," Joanne told POPSUGAR. "You have to learn English, you have to wear the right clothes, you have to learn American mannerisms and American etiquette. When you start accommodating to those kinds of assimilative mandates, you're doing that at the cost of your own traditions and heritage. There just isn't room for both, completely."

Yet food is one of the only aspects of culture that keeps immigrants "anchored" to their heritage, history, traditions, and family. Joanne, a lawyer by day who weaves intimate stories about her family and Korean culture into her Korean vegan recipe videos, continued: "No one's going to come into your house and tell you what you can or cannot eat, so it becomes particularly poignant and powerful for immigrant families to continue that tradition in this culinary aspect."

For Tiffany Chen, or Tiffy Cooks on TikTok and Instagram, sharing her Taiwanese culture and familial traditions is also at the core of her content. "In Taiwan, the way we greet someone when we say 'hello' is asking, 'Have you eaten yet?' That's how much food plays a huge role in our culture and in my country," she explained to POPSUGAR. "So when I share my recipes, it's so much more than just sharing how to make a dish; it's the story behind it. Every dish comes with a memory, even when I'm making recipes that are not from my Taiwanese culture."

The longer the noodles, the better! Make sure to not break when cooking and eating #fyp

Additionally, for immigrants of colour, the effects of colonialism and racism on our food is what makes culinary appropriation an even more sensitive subject. The daily microaggressions we faced when it came to our food, for one. "I think all of us [Asians] went through a phase where we were too embarrassed to bring our lunch to school because of what people would say and smell," Tiffy said. Joanne added, "When you add that layer to it, and then all of a sudden, people take the food that you were made fun of and ostracized for, and start monetizing and profiting off of it, it's just a different level of pain that people have to deal with it. To me, that's when cultural misappropriation really becomes pernicious."

So where is that fine line between showing your love for Asian cuisine and blindly taking advantage of a minority culture? By definition, cultural appropriation is the "unacknowledged adoption of customs, practices, ideas of one people or society by members of another and typically more dominant people or society." The key word here is acknowledgement.

For Joanne, the proper distinction is actually between appropriation and misappropriation, as opposed to appropriation and appreciation. "There are certain circumstances in which appropriation is great — it's what leads to innovation, connection, conversation, dialogue, and building bridges. Misappropriation is when it's done incorrectly, when it is exploitative, when it's purely for the profit of the person who's doing the exploiting and no credit is given to underlying culture or the cuisine," she said. On a larger scale, that might look like a famous white restaurateur opening a Korean restaurant to capitalize on the popularity of bibimbap (a well-known Korean dish) without doing the research behind the food.

But how do we identify examples that are not-so-overt, particularly on TikTok, where the distinctions are further blurred? "On TikTok, it's very easy to be perceived as being disrespectful to cultural cuisines because you only get 60 seconds," Joanne explained. "I think because of the limited amount of time, you start taking shortcuts in your content, and you just don't have time to explain intricacies and all of the ingredients that you're using." With these constraints in mind — coupled with the fact that the food blogging world on TikTok is "nascent" — context is crucial. "If you're making a Korean dish, then a Korean person's going to watch that and have certain expectations. And when those expectations are not met, I can understand why a Korean person would at least be scratching their head and be like, 'Why are you calling this Korean when it's not? Are you trying to capitalize on the popularity of it as opposed to really doing it service?'"

Tiffy shares an experience where a fellow TikTok creator with upwards of 100,000 followers remade her family's Taiwanese beef noodle soup recipe. While she was initially "so excited" that someone had remade her recipe, but when she watched the video, she noticed the creator had replaced traditional Taiwanese ingredients like black bean paste with those typically used in other Asian cuisines like gochujang (Korean chili paste), rice noodles, and limes. While Tiffy is a firm believer in having fun in the kitchen, the lack of context and generalization of different Asian cuisines from a popular creator, no less, was what she found offencive, though of course, she's sure the creator didn't mean any harm. "I think what people don't understand is that when I make a bowl of Taiwanese beef noodle soup, I'm sharing a piece of home, a piece of my culture with you — something that my grandma taught me."

Joanne added, "It's one thing to disrespectfully borrow on a lateral basis from other cultures and doing it correctly, but it takes on a whole new level of misappropriation when it's done by a dominant culture that has historically oppressed the other one." It's no surprise that these exploitative examples often come from white male creators with larger followings than their Asian counterparts.

How Creators Can Avoid Culinary Appropriation on TikTok

There are a few ways for creators and food bloggers specifically to be cognizant of whether they're approaching appropriation or exploitation, according to Tiffy and Joanne. "Step one is doing your homework, especially when you have a huge platform," Tiffy said. "There's so many Asian food content creators out there now, and so many of us sharing all of our different stories and histories," which is to say there's no longer an excuse.

Once you've done the research, Joanne suggests "putting up a few guard rails" and explaining to viewers what exactly you were inspired by and what "twists" you might have put into the dish. She also cautions against calling something "authentic" when it might be more appropriate to call it "fusion." "If you're inspired by bibimbap and you don't have the time to research what actually goes into it or you don't have access to the authentic ingredients, that's totally fine. No one's going to fault you for it. But then just say, 'I didn't have time to do this, but I wanted to pay an homage because it did inspire me.' I think that's totally appropriate and actually kind of wonderful — that's how we create beautiful new cuisines."

A post shared by The Korean Vegan, Esq. (@the.korean.vegan)

In addition, credit to the original creator, big or small, is critical, particularly if your content is making any kind of profit, whether that's financial or it's attention in the form of followers. "There is some responsibility on your part to at least give a base level of respect to that culture of cuisine," said Joanne. And speaking of monetary gain, Tiffy adds that especially for those who create content that monetizes off of Asian culture and food, whether you're Asian or not, it's important to use their platform to speak up about hate against our community and drive their followers towards Asian-owned businesses.

How Viewers Can Combat Cultural Appropriation in the Food Space

As for their advice for viewers, both Tiffy and Joanne are clear that they can make whatever they'd like in their own kitchens. "I am not about telling people how they cook their food or what ingredients they should use," Joanne said. The blogger, who often cooks sundubu jjigae (a spicy soft tofu stew in Korean cuisine), shared that a recent follower sent her a photo of their own take on Joanne's recipe, but had added in cherry tomatoes, an ingredient that's traditionally not a part of the dish. "I loved it. They're not doing it for profit or trying to make a buck off of it. They're just enjoying being inspired by Korean cuisine. I think that's beautiful and that does show respect to Korean culture on a consumer level."

But while viewers don't necessarily have a duty, Tiffy encourages them to open themselves up to different cultural cuisines and educate themselves on their stigmas, like the inaccurate and racist perception of MSG as an unhealthy Chinese additive. "What I hope to do with my platform is, even if people don't want to cook my recipes, maybe they can support their local Asian restaurants and give the dishes there a try." Joanne also notes that she appreciates how responsible consumers call out when they do see cultural misappropriation happening on TikTok.

Tiffy added, "[Viewers'] likes and follows mean a lot. That is so much more powerful than they can ever imagine." So if you love an Asian creator and their recipes, throw them a like, follow, and support their brands.

Race and Culture
The One Where I Wasn't Supposed to Like Friends, but I Totally Do
by Kedean Smith 6 days ago