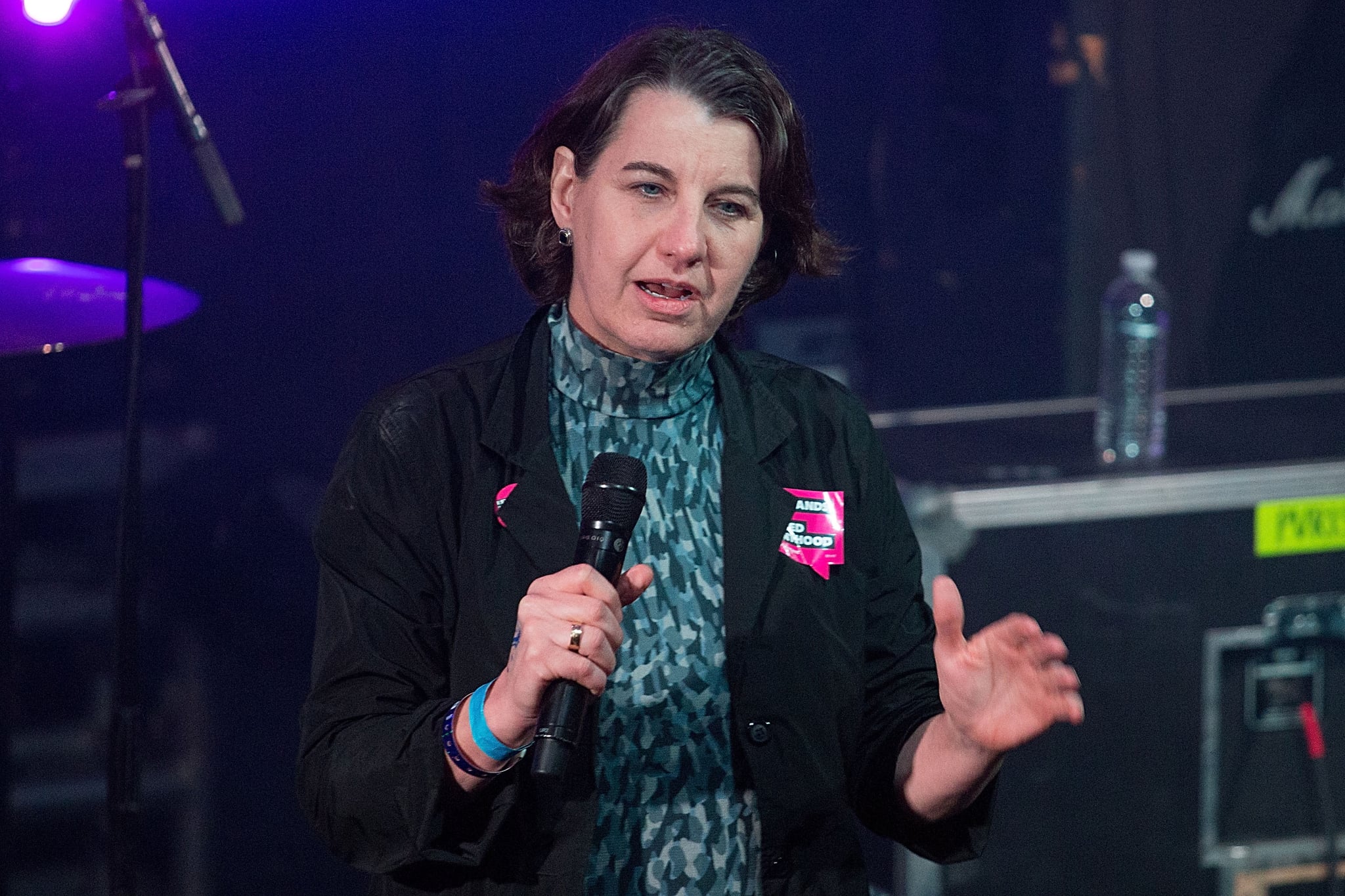 UPDATE: On May 18 — less than two weeks after our conversation with Planned Parenthood's executive vice president Dawn Laguens — the Trump administration announced it would cut federal Title X funding to organisations that share information on abortion with women. "This is an attempt to take away women's basic rights, period," Laguens said in a statement released that morning. "Under this rule, people will not get the health care they need. They won't get birth control, cancer screenings, STD testing and treatment, or even general women's health exams." The organisation says it will continue to fight for its patients, noting that 200 members of Congress and 100 public health organisations oppose such a gag-rule policy.

ORIGINAL STORY: It's a precarious time for reproductive rights and a pivotal time for Planned Parenthood. The organisation's president of 12 years, Cecile Richards, stepped down from her post this week. Still, while Richards's departure may mark the end of an era, Planned Parenthood is in good hands with its executive vice president and de facto spokeswoman Dawn Laguens, who herself is a force to be reckoned with. Laguens was in LA on May 5 to speak at the United State of Women summit, and we caught a moment with her to talk about the future of Planned Parenthood, a particularly urgent threat to women's rights that deserves our attention, and the new wave of young activists coming aboard the organisation.

POPSUGAR: It's fascinating to be here today right after a female governor signed the most restrictive anti-abortion bill in the nation into law.
Dawn Laguens: I'd say depressing — but it's actually exciting to be here at United State of Women because we see what people signing those kinds of bills and threatening women's health and rights is generating: this kind of energy and activism.

PS: That Iowa law is just another example of state-level laws that install barriers for women trying to access abortion. Some of those we've seen struck down — notably the Supreme Court and the Texas law HB2 — but what's your hope as these laws continue to crop up? Do you think they will get shut down as they continue to be challenged in court?
DL: Yes. We are absolutely taking this to court. It's 100 percent unconstitutional. And, of course, I think, they're doing it to try to press the edges and satisfy their base in many of these places. We know the extreme folks who are running the Health and Human Services department, and some of the people in the state have actually said, 'We want to do this just because we want to try to get the far-right voters to come out.' Because they know it's not good for women's health.

You look at Iowa, of course, and in addition to trying to pass this unconstitutional six-week ban on abortion, they have taken away teen pregnancy and education funding. They cut funding for family planning that caused more health centres to shut down. It's really quite hypocritical to say they're anti-abortion. They are doing everything they can to reverse the progress we've made that has lowered the unintended pregnancy rate and the teen pregnancy rate.

"It's a dangerous moment."

PS: You've said that you're not interested in stepping into Cecile's role. Does that remain true?
DL: That remains true. I think I have the best job at Planned Parenthood already. I love what I do. I'm excited about us finding a new person and working with them in the same way I've worked with Cecile. Cecile and I were friends for 25 years, so I'll look forward to developing that relationship. And who knows? I may know them already.

PS: You've been friends with Cecile for years. I just finished reading her book, and you pop up a lot! I think a lot of people would like to see her run for office. As her friend, do you think that's in the cards, or would you like to see her do that?
DL: I think Cecile can succeed at anything she tries to do, for sure. She has the heart of an organiser, so again, I don't know whether she's a run-for-office person, but she's definitely not going anywhere, I don't think, and will continue to galvanize and mobilize young women, young people, to get involved and themselves step up. So I would never say never with anything with Cecile, but I don't think that's where she's headed. I'll let you ask her.

PS: I found something you said recently interesting: that even though people might think the Trump administration is such a hot mess that it's not accomplishing anything, they really are, unfortunately, getting a lot done. What is something you wish more people knew about — or would get worried about — so they get involved?
DL: There's something that's coming up right now that people should really be paying attention to. Ninety-eight percent of women in this country use birth control at some point in their reproductive life and know how vitally important it is to being able to have academic and educational success and know how critical it is to having economic success, to your personal health, to your family's health. Now, [the Trump administration] is coming full force with a program to try to decimate Title X, which makes it possible for 4 million women in this country who are low income to get access to birth control.

There are also very strong — I would call them more than rumours — that they are going to try to institute, for the first time ever, a domestic gag rule. That would force doctors to deny critical information to women about the availability and advisability of abortion. To not even mention the word. That would of course force the nation's leading family planning provider, Planned Parenthood, out of the Title X program, because we would never betray our medical ethics to deny women information and to make the best judgment for themselves.

PS: And if the Trump administration has already done it globally, why wouldn't it do it nationally?
DL: Yes, and we know that the impacts globally are very significant. We see that when women lose access to family planning and to good reproductive providers, maternal mortality goes up. We saw it in Texas, we've seen it across the globe. It's a dangerous moment. As you point out, they may look like a circus, but the Health and Human Services department is packed with people who do not believe in birth control and who want to make abortion illegal and criminal.

PS: As you mentioned, geography increasingly plays such a role in access to reproductive care. I feel privileged to live in California, where we do have good access, but if you live in Kentucky or Texas, that may not be the case. What is Planned Parenthood focusing on when it comes to changing that?
DL: We have worked very hard to find ways to deliver information and care that go around, over, under, through the barriers that are being put up. So we're using every digital tool that we can. We just launched [the app] Planned Parenthood Direct. It's now in six states, but it's going to go to all 50 states. You can see a clinician and get birth control — a pill, patch, or ring — delivered directly to you. It's convenience, but also access.

We've built a new health centre in Kentucky; New Orleans; North Carolina; Charleston, South Carolina. We're putting a footprint down there that says 'We will stand with the women in these states, and we will make sure they get care.' On the political side, Planned Parenthood Action Fund is mobilizing our biggest civic engagement program ever, to make sure people know what's on the line, who's on their side, and who is not.

PS: You're a mom yourself. Your triplets are 19 now?
DL: Nineteen. The worst birthday, if you could even imagine, is they turned 18 on Election Day 2016. I was like, 'Sorry, kids.'

PS: Probably galvanizing, though.
DL: It was, and the way they're being activated right now is really exciting.

PS: Today at USOW, we're seeing the Parkland students and so many other young women leading the charge. What's your hope for what that's going to mean for the future, and the future of Planned Parenthood, specifically?
DL: Well, just since the last election we have had 350,000 teenagers and young college students become part of the Planned Parenthood advocacy family. And that's in addition to the large number who have gotten health care and information from us. We have more than 72 million visits to our website [annually] for information and access. That's massive. We see young people on all fronts more and more. It's partly why I think Cecile felt like this was the right moment. There's just a wave of great young leaders and leaders of colour coming up to lead the organisation.

PS: Where do you see Planned Parenthood a decade from now as those leaders come up?
DL: Before that, I guarantee! It won't be 10 years before they've scooched me right aside and are running the show. They already do run much of the show — let's be clear.

But in 10 years, my hope is that what we've done in 2018 and 2020 in terms of policy and politics changes the landscape, so that there are no barriers that people are facing to care, that we don't have "healthcare by zip code" or "rights by zip code" like we're facing right now. That we've really changed the tide. That redistricting aligns the political landscape with what people actually believe and desire, which we know is totally out of whack. That we have continued to innovate and use every tool we can to make access affordable and convenient for everyone. That's what we've been doing and that's what we'll keep doing.