"In fidelity and gratitude to a mass peoples' movement working to establish 21st century social, economic, and human rights – including guaranteed health care, higher education, living wages, and labor rights for all people in the United States."
– @AOC#DemConvention pic.twitter.com/KbFL5xl0Uw

Many expected to hear from New York Rep. Alexandria Ocasio-Cortez during night two of the 2020 Democratic Convention, but when the politician dedicated her speech to nominating former Democratic presidential candidate Bernie Sanders, Twitter was confused as Sanders had suspended his campaign back in April. "Did AOC" started trending on the platform Tuesday night as people wondered why Ocasio-Cortez vocalised her support for Sanders, instead of Joe Biden. But as AOC clarified herself in a tweet, convention rules require roll call and nominations for any candidate that passed the delegate threshold, which included both Biden and Sanders.

AOC further explained her endorsement in a tweet, sharing that she was asked to second the nomination for Sen. Sanders during the roll call. "I extend my deepest congratulations to @JoeBiden — let's go win in November," she wrote. AOC's short yet powerful speech was followed by an official roll call featuring delegates from 57 states and territories announcing their nominations. Watch her 90-second speech above and read her tweet below.

If you were confused, no worries!

I was asked to 2nd the nom for Sen. Sanders for roll call.

Amanda Gorman
Celebrities and Politicians React to Texas Elementary School Shooting: "There Simply Has to Be Change"
by Eden Arielle Gordon 18 hours ago 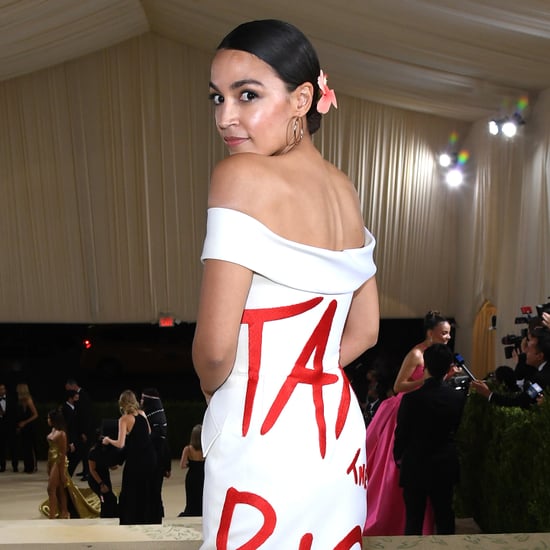 Celebrity Fashion
AOC Turned Around and Made the Ultimate Statement at Her First Met Gala: "Tax the Rich"
by Yerin Kim 14/9/21