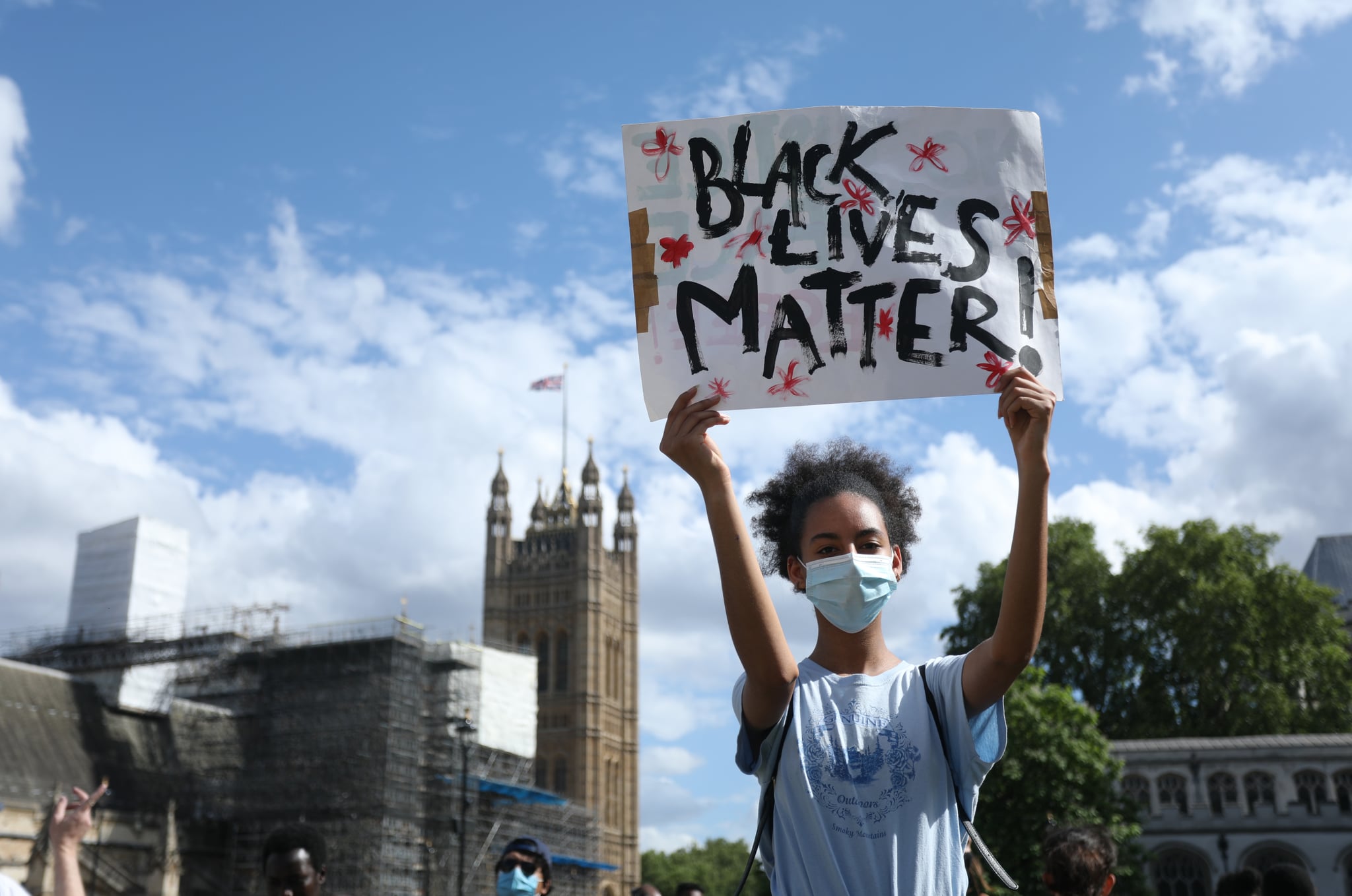 Racism was always a very foreign concept to me, until I moved to the UK. The privilege of being pretty by society's standards and being mixed race shielded me from a lot of the experiences that my deeper-skinned sisters struggled with since childhood. Now, I feel like I am being called into the front lines of a battle that's been raging for centuries, and I'm scared. I don't want to lose my softness — I'm the type of person to get teary eyed at small animals, children playing, and cute old couples holding hands — but my light-skinned privilege can no longer protect me, and I have no choice but to fight.

I grew up in Jamaica — a very proud Black country — where the closest thing to racism was colourism. I was always trying to validate my Blackness, and negotiate acceptance within my own community, who constantly told me that I wasn't Black enough. When I moved to the UK, the narrative switched, and all of a sudden I was the Black friend. Add the fact that I only started growing my natural hair when I moved to the UK, which made living in white society that much more difficult. I remember wearing my natural hair to journalism classes, and being asked if it was political. My professor asked why I always teased my hair — my hair that naturally grew out of my head in a vertical direction. Or a classmate, a white Belgian girl, who confidently told our majority white class that "people with locs don't wash their hair" — which can be easily dispelled with a quick Google search. I recall my first time partying in East London, and a white girl ran up to me, put her hands in my hair, and asked "OMG! Is it real?" — she had never seen a blonde afro before, I assumed. I was shocked that this was people's everyday reality. I didn't know how to respond, so I didn't. I was stunned, and then I was upset for not sticking up for myself. In the past three years of living in the UK, my introduction to racism has been hard and swift, but nothing could have prepared me for dating a white Welsh boy from Cheshire.

My parents are an interracial couple — Black mum, white dad — so I grew up very aware of the vitriol some people have for a couple of different ethnic backgrounds that look really happy together. But dating a white guy in the UK, especially one from a middle class, suburban background with no close friends who are people of colour, was a totally different ball game.

"I was 4,695 miles away from family, the world felt like it was falling apart, and despite being drained and exhausted, I was being forced to defend and protect Blackness in majority-white spaces — a Blackness that I was still understanding within myself."

A few months into being "official", I began to see the internalised pain of some Black people in the UK. One late night, my partner and I stopped into a Five Guys restaurant to grab a bite to eat. It was traumatising when a Black man saw us together, began targeting us, and tried to fight my boyfriend. "My d*ck is bigger than you, bro!" and "Oh, you think because you're with a Black girl you're bad?" Thankfully, my partner doesn't have the type of ego to engage in that kind of toxic masculinity, but for me, it was terrifying and eye-opening. I was worried this man's friends would be outside ready to stab my guy for stealing one of "their women," or maybe splash acid on my face for "selling out" to the other side. It was scary, but it got even worse when I became a fixture within my partner's white friend group.

It started with racial microaggressions — mimicking my Jamaican accent when it peaked out after a few drinks. Then, more subtle ignorance, like being proud to share with me that they love Jollof rice — a West African dish — that I had never even heard of until coming to the UK. Although they were trying to connect with me, it's offensive when Blackness is seen as a monolith. Experiencing these things for the first time, and being the only Black person in the room for the first time, while Black Lives Matter dominated the political landscape, meant that I could no longer hide from my own racial trauma. I was even further removed from any sense of community than I ever had been before. I was 4,695 miles away from family, the world felt like it was falling apart, and despite being drained and exhausted, I was being forced to defend and protect Blackness in majority-white spaces — a Blackness that I was still understanding within myself. And while some well-meaning friends of my partner followed me to BLM marches and apologised for tone-deaf comments, others made a point to make me feel even more estranged.

"I'm coming to realise that dismantling white supremacy is a long game, and it's only just beginning for me."

Meeting one of my partner's friends — we'll call her Karen—— is the first time I was being forced to directly confront a racist. From the first time we met, she began drilling me about my ethnic background. It was strange, but being an international student in both Canada and the UK, it's something I was used to from both white people and people of colour. While I explained my upbringing and that of my parents, she snidely said, "Oh, that's an interesting mix." When asking about her background, she became defensive, and got very short with me, "I'm not finished [drilling you about your ethnicity]!". The room became awkward and tense, people were embarrassed, but no one came to my defence. In that moment, I realised how the difference between being nonracist and antiracist can literally become a situation of life or death.

The next time I saw Karen, before she engaged in any small talk about what I'd been up to, she couldn't resist asking about my hair. "Your hair is different. How did you get it like that? Your hair is always changing". That was a strange opening considering the previous incident, but I understood that she's racist so I wasn't surprised. It was then confirmed when we all got a bit boozed, and Karen asked me without context, "Where are you going?" I was confused, so I stayed quiet and waited for her to clarify. She quickly added, "I don't mean you shouldn't be in this country or anything. I mean, are you planning a trip for when lockdown lifts?"

When people say that racism doesn't exist in the UK, it's extremely painful. And while I want to get angry and absolutely destroy the Karens of the world, that's not how revolution and healing happens. I'm coming to realise that dismantling white supremacy is a long game, and it's only just beginning for me. It takes strength and conviction to open people's hearts, force them to reflect, and actually want to change — but it also takes allyship. To be an ally is more than posting a Black square, going to a BLM protest, or dragging a campaign for lack of diversity. Unlearning systemic oppression begins in everyday exchanges, by using your voice to challenge prejudice — even when it's awkward, uncomfortable, and happening right before your eyes. It's a privilege to be antiracist without having to experience the heartbreak of being othered. It's becoming more frequent for me to exist in white spaces where I'm forced to defend Blackness with my last breath. And now that I'm being called to fight — and really wish I didn't have to — where will you stand?