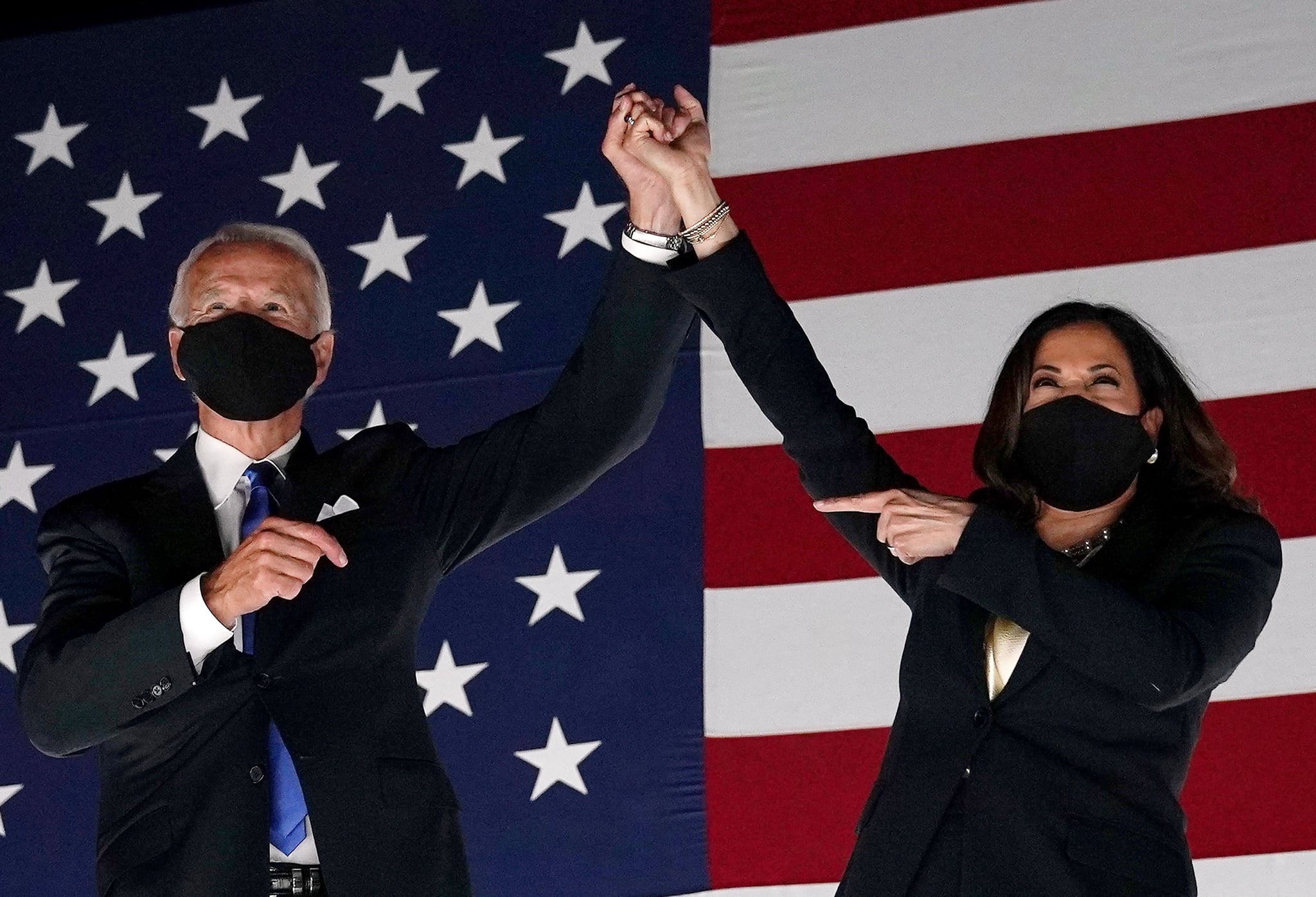 Saturday, 7 Nov., 2020, will be a day that goes down in the history books regardless of what country you live in. It's the day that Joe Biden became the 46th President of the United States of America and when Kamala Harris, a woman of colour and child of immigrants, became the Vice President of America, putting an end to four years of a Donald Trump presidency.

Even here in the UK, the election process in the US was anxiety-inducing as we watched the votes slowly trickle in and waited for mail-in votes to be counted in key swing states such as Michigan, Pennsylvania, and Wisconsin that would ultimately switch the conversation once and for all. We saw how the tireless efforts of Stacey Abrams — a woman who lost the 2018 election for Georgia governor due to voter suppression — helped flip Georgia for the Democrats for the first time in over 30 years, a win that owes a tremendous amount of gratitude to women of colour. According to the New York Times exit polls, 91 percent of Black women and 70 percent of Latinx women voted for Biden and Harris. As a Black British woman, seeing this warmed my heart and helped restore my hope for the future.

The tragedies, grief, and anxiety that America has faced these last four years have often rippled into the hearts and minds here in the UK and across the world.

The tragedies, grief, and anxiety that America has faced these last four years have often rippled into the hearts and minds here in the UK and across the world. The pain Trump's presidency has inflicted through legitimising white supremacy, lying to the American people, suppressing voters (and particularly voters of colour), separating migrant children from their families, cosying up to dictators, and severing foreign ties has not only weighed heavily on the hearts of Americans but on the rest of us, too.

This year has been particularly demoralising, as we've truly seen Trump's scaremongering tactics and divisive strategies of pitting people and nations against one another escalate. His failure to acknowledge the severity of COVID-19 and to act and protect the American people from the virus, as well as his blatant racism surrounding the Black Lives Matter movement, has had disastrous effects both in his country and abroad. This year has been a time of trial, exhaustion, and trauma, and what has made many of the American people weep has made the whole world weep with them, too.

A clear example of this are protests that took place in the wake of George Floyd's death and Trump's authorisation for the military to intervene and shoot "violent" protestors, not to mention his phrasing the movement as a "symbol of hate" when New York Mayor Bill de Blasio painted the slogan "Black Lives Matter" on the streets outside of Trump Tower in Manhattan. Trump's aggressive actions spurred marches and protests in London, Birmingham, Manchester, and Liverpool, and while a majority of these protests were an act of solidarity with the Black men and women in the United States, we also saw far-right groups rise up, feeling emboldened by Trump's racist rhetoric.

Trump's presidency has also had a negative economic impact here in the UK, due to the US-China Trade Wars that Trump sanctioned, which came at a great consequence to the US economy as more than half of goods were subjected to several rounds of tariffs. This resulted in an international reduction of British goods, and in 2018, the FTSE fell to 1.2 percent as a direct result. In regards to Brexit, Trump's unfiltered language and approach have left the UK vulnerable. His initial stance that stated there would be no deal between the US-UK post-Brexit saw the GBP fall 0.61 percent against the USD whilst also considered fragile against the euro. His change of heart in 2019 for a "Hard Brexit" would mean that the US would benefit tremendously when it came to US imports as the UK would be tied into the EU's tariff schedule.

This election was tightly won but with a historic turnout of voters. America saw a record number of citizens wanting to offer an admonishment of the current administration and have their voices heard. And with Black, Latinx, and young communities voting in record numbers, the call for change was deafening. Without them, we would have been facing a very different result.

As people across America flood the streets to celebrate the Biden/Harris win, across the pond, we smile and breathe a moment of relief, knowing that the result of the 2020 US election has offered the world an opportunity for change. And although we still have a long way to go to change the traditional rhetoric, fight systemic racism, and update old-fashioned ways of thinking, the outcome of this election is a step in the right direction.

With the Biden/Harris win, we are also eyewitnesses to a woman — a Black and South Asian woman whose parents were immigrants to the United States — entering the White House to support and help lead America. We are also witness to a working First Lady, as Jill Biden will continue to work as an English professor whilst carrying out her duties as FLOTUS. What does this tell the world? It modernises and celebrates the rhetoric around working women — sending the message that women can have it all. It tells us to continue fighting until justice prevails. It tells us not to give up hope. And it tells us to fight for what we believe in and to continue to hope and dream in light of a progressive change.

I hope her footing in the White House continues to drive and develop authority for the voices within our own government such as Diane Abbott, Dawn Butler, and Taiwo Owatemi, who campaign endlessly for bettering the lives of Black and Asian people within the UK.

For me personally, I consider Harris more than just a symbol but an action for change. Her acceptance speech, which stated "women who fought and sacrificed so much for equality, liberty, and justice for all, including the Black women, who are too often overlooked, but so often prove that they are the backbone of our democracy," said it all. It was the recognition of our worth — and by "our," I refer to communities of colour — to finally be valued and seen as a state of authority against our white and male counterparts. Her voice and presence pave the way for so many younger generations to look up to and for women like myself to continue fighting. Brought closer to home, I hope her footing in the White House continues to drive and develop authority for the voices within our own government such as Diane Abbott, Dawn Butler, and Taiwo Owatemi, who campaign endlessly for better lives for Black and Asian people within the UK. I hope to see the positive impact that Harris will have in the US and for BIPOC specifically and hope that this will trickle down into the UK.

Connected like sisters, the US election has brought a huge sigh of relief and gratitude in the UK. We can sit back and witness the changes that are upon us, and as we come together in celebration as nations, we can all start the healing process and prepare for the uphill battle that we have yet to climb. The step forward that America has taken is also a step forward for the UK and the world, and hand in hand, we can now walk towards the light and embrace the moments of peace, tranquillity, and justice for all.