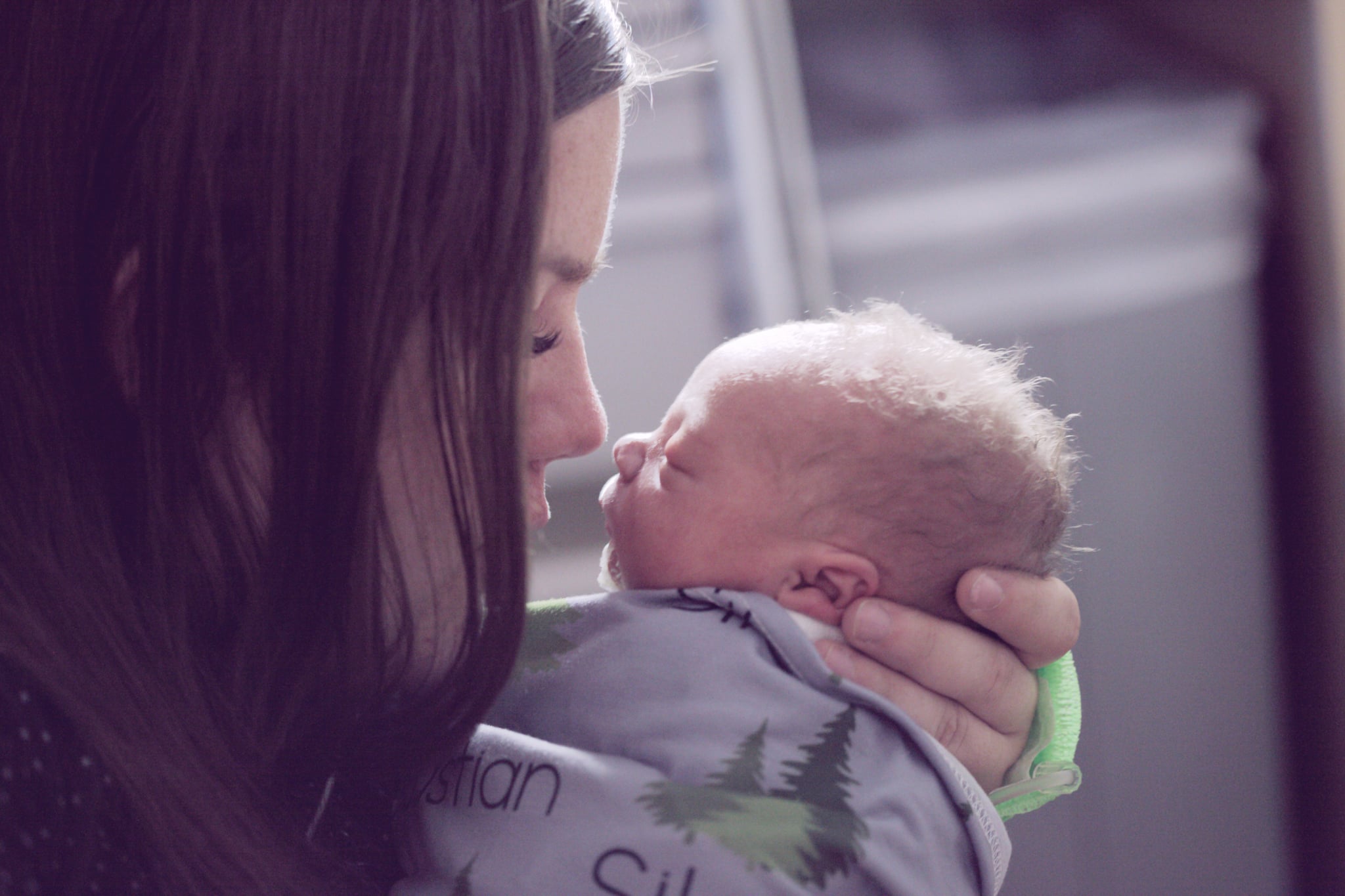 When I returned to work after giving birth a year ago, I was — like many moms making this transition — sleep deprived, hormonal, struggling with pumping, and suffering from separation anxiety. Though many women describe longing for adult interaction by that point, I didn't feel ready, and I didn't think I could handle it. But I did, and I could. And each day spent searching for balance showed me that balance is a fiction — and that part of being a working mom meant that I would need to set my own priorities when it came to work, childcare, personal passions, and home life.

""This only underscores just how important support really is for new parents in those postpartum months under any circumstances."

More than ever, working moms right now don't have that privilege. As coronavirus tears through society, new mothers today are being robbed of the ordinary pleasures and sorrows of the fourth trimester (the three months following birth, covering the transition into parenthood), and of the ability to set a good foundation — or any foundation at all — for their fifth (spanning the transition back into the world and to work). Mostly, these new moms are in survival mode. As a result, they are struggling with a return to work — work looks totally different than it did three months ago, there's no outside childcare available, and good postpartum care has been hard to come by for weeks — and struggling at home, where, as data shows, they're likely bearing the brunt of childcare and manageing the household. With these additional stressors placed on new moms, reintegrating their identities and reemerging into the world is essentially impossible. This only underscores just how important support really is for new parents in those postpartum months under any circumstances — a realisation that drove me to found a maternal wellness startup, Motherfigure well before the pandemic, which has in turn made the need more acute.

Different cultures have different definitions of what constitutes a "good" fourth trimester, but the goal in general is to offer space and time for mothers and babies to bond and recover. In Chinese culture, new moms practice confinement for 30 days after birth, a period when the new mom doesn't do anything — including wash her hair or receive visitors — while others manage everything from cooking to cleaning to caring for older children. In many Latin American countries, the practice looks similar — and, in a twist of irony, is called la cuarentena ("the quarantine"). The United States lacks such traditions, and tends to not honour the new mother in the same way, with even maternity leave not being a given. But almost everyone agrees that the fourth trimester was not meant to be done alone, instead leaning on a support system of family, friends, and professionals like childcare providers, lactation consultants, and postpartum doulas. But our current version of quarantine, marked by physical and emotional isolation, is not that.

I did not give birth in the middle of a pandemic, but parts of my initial transition into parenthood felt isolated. My husband had moved to Chicago the year before I gave birth, with our family and friends scattered on opposite sides of the country, and we had not yet made the friendships here that buoy us now. We were naive, romanticizing the idea of cocooning as a new family. And we were humbled by the demands of caring for a new human and ourselves against the backdrop of a harsh Chicago winter that kept us mostly inside. When my husband's aunt, who happened to be in the city for the holidays, offered to come over for a few hours to let us sleep while she washed bottles and watched our son, I wept in gratitude — so relieved to have help I had not acknowledged I needed. It got easier to ask for help from there: Friends dropped off meals (or coffee); family came to stay for a week at a time; a lactation consultant and postpartum doula came to our home and made all the difference. In ordinary times, it is easy to take for granted that we can call on — or hire – a "village," if we need it, and the current situation casts that reality into stark perspective.

Right now, women aren't able to call on that kind of support. This means we need to lean on old standbys as well as get creative: Having dinner delivered, sending a gift certificate, or dropping off a homemade meal (taking every precaution against exposure). Encourageing in-home self-care, like face masks, or offering support that makes multitasking easier, like babywraps (and videos on how to do them). Checking in via video calls and supportive texts. Pointing out resources like new moms groups that facilitate virtual connections so people feel less alone, as well as telehealth options that ensure people get the care they need, even if at a distance.

Because the consequences of not having the help they need are dire: Poor social support, for example, is a risk factor for postpartum depression, which affects one in seven new mothers in ordinary times. Life stress, low socioeconomic status, and economic fears contribute to PPD, too. What's more, with most childcare gone, the pandemic is forcing many of us to confront the fact that, in heterosexual couples, women spend almost double the amount of time doing unpaid work at home as men, according to the Organisation for Economic Cooperation and Development. In many families, whether there is a newborn or not, day-to-day routines are being shaped based on whose job is more "flexible," and whose job pays more — a tradeoff that is familiar for anyone who has had to call in sick because their child is.

"Moms are more than capable of navigating this crisis — because moms are superheroes."

The fourth trimester, too, is meant to set the foundation for the mom's return to the world. When a fourth trimester experience is so rife with challenges, that reintegration is bound to be more complicated. For me, many aspects of returning to office life were painful, and I longed for the flexibility to work more frequently from home. But the separation also served as a helpful reminder that I was a person independent of my child, that I could think about things other than him — and that I still mattered, too. I felt foggy, but I could still be competent in meetings, even on days I forgot the cooler for my breastmilk.

There is no such separation between work and home life to be found these days. Friends and colleagues describe waking up at unspeakable hours before their children to get work done, if they can think, and desperately working during naps — if naps come — and again after their children go to bed. Nevermind burning the candle at both ends; the candle is on fire, leaving many confronting dramatic choices about their ability to sustain this lifestyle, and themselves — if they have such a choice at all, if their company and role is stable amid this pandemic to begin with.

Moms are more than capable of navigating this crisis — because moms are superheroes. But they shouldn't have to, and it shouldn't take a global crisis to make society realise that new moms bear the brunt of challenges like this one and need support.

Author, Chelsea Allison
Chelsea Allison is the founder and CEO of Motherfigure, a maternal wellness startup focussed on empowering moms and lowering the barriers to support through its national, community-driven provider directory; its magazine, where experts share evidence-based info and moms share their stories; and with products that provide meaningful improvements on existing offerings.