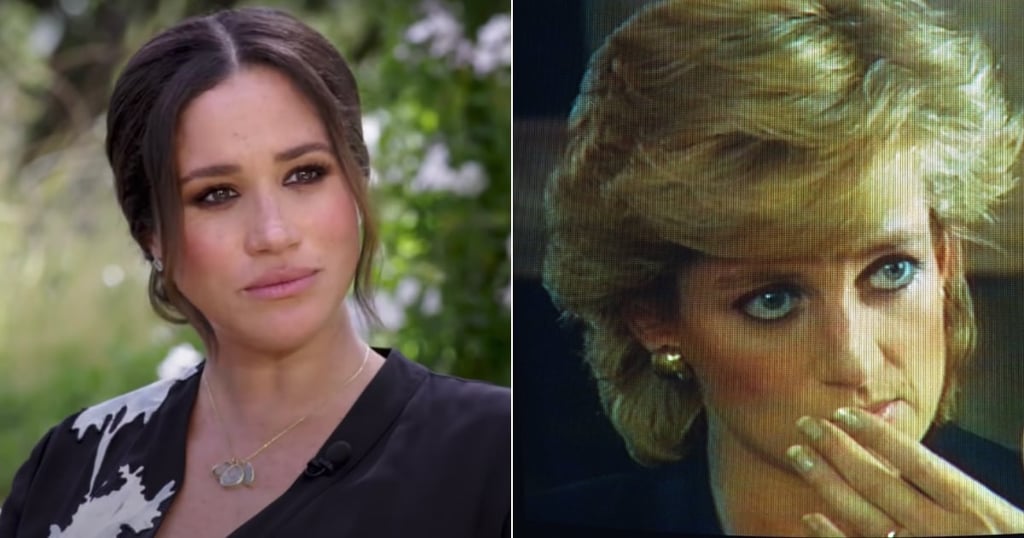 It's no secret that royal fashion and beauty choices are always carefully considered. Each colour, designer, and style is deliberate. That's why when the first trailer clip of the Duke and Duchess of Sussex's much-anticipated interview with Oprah was released, we were transfixed by Meghan's makeup. The bold, powerful, and strong eyeliner and shadow combination seems to be a very deliberate choice when it comes to Meghan's look for the historic television appearance.

Princess Diana was the main topic of conversation in the interview trailer, so it's no surprise that the duke and duchess wanted to honour her in many ways for the occasion. For one, Meghan wore a diamond tennis bracelet once owned by Princess Diana. The duchess also appears to have replicated Diana's strong eye makeup that the princess wore for her 1995 BBC Panorama interview. Much like Diana's monumental TV interview, Meghan and Harry's sit-down with Oprah is about them taking control of their own narrative, which is why we can't help but see the resembles between Meghan and Diana's makeup — especially since Meghan often keeps her eye makeup fairly understated for public appearances.

Their dramatic makeup both included black kohl eyeliner along the entire waterline, with the same shade taken along the upper and lower lash line, topped off with a neutral light pink lip to keep the spotlight on the heavy eye makeup.

Now, sure, this makeup similarity could just be a coincidence, but knowing the royals and their careful consideration of their aesthetic choices, it seems likely that Meghan wanted to honour Diana and replicate some beauty tips from her past for the Sussex's historic moment. And even if she didn't have Diana in mind for this makeup look, both the princess and the duchess have made a case for how a powerful makeup look can draw viewers' attention to their eyes — and their words.