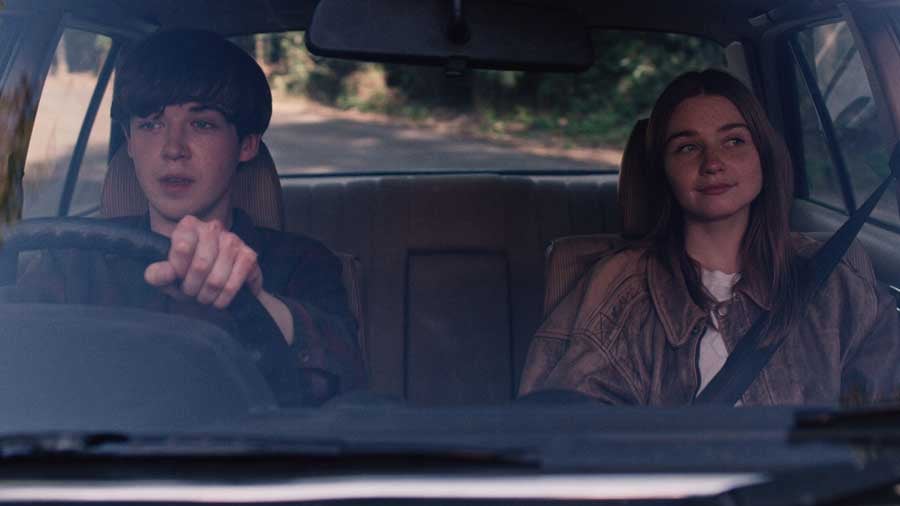 After Netflix picked up Channel 4's The End of the F***ing World, a dark comedy about two misfit teens who go on a road trip, the sleeper hit got a whole new audience. In the first season, Alyssa thinks they're trying to find her father, but James has another idea in mind: at the end of the journey, he plans to kill her.

It's a dark show, to be sure, though not as dark as the description might have you believe. But what viewers have most been wondering about is whether there will be a second season, especially as the season one finale ends on a massive, vague cliffhanger.

The good news is that Netflix has announced that a new season is on its way! Charlie Covell, who wrote the first season, is on board once again, which means more of the same twisted comedy is coming our way. In early October, Channel 4 confirmed that the series will begin on Nov. 4 in the UK.

But what can we expect from season 2? Well, let's start with a recap as to where we've left off.

Warning: spoilers ahead for season one.

In season one, James and Alyssa end up breaking into a house. When the house's occupant surprises them, he attacks Alyssa and James kills the man while protecting her. They go on the run, eventually being caught by the authorities.

James confesses to the murder and says Alyssa had nothing to do with it, but she decides to protect James this time and knocks out DC Noon so James can escape. He in turn hits Alyssa so she can't run away, and as he flees across the beach, a shot rings out and the show cuts to black.

Related:
Netflix's NSFW New Show — The End of the F***ing World — Will Be Your Next Obsession

This scenario easily lends itself to a second season. Who got shot? Was it James? Or was it Alyssa shooting one of the police officers? There are a lot of ways the show could go with that. It could keep the two teens on the run together, or it could see them both captured, or it could have James arrested and Alyssa feeling responsible and trying to bust him out. The possibilities are endless.

On Reddit, one user said the comic ends a little differently than the show, with James definitely sacrificing himself to save Alyssa. So there isn't any source material with which to continue the show, but there are plenty of ideas out there.

One poster floats the idea of there being a time jump of two years, so the show catches up with the two kids after they've finished school and are now backpacking through Europe together. Of course, that doesn't resolve the cliffhanger, but it's a nice idea. Another user suggests the second season pick up with them making it to the boat they were going to escape on in season one and continuing from there.

Of course, there are a few viewers out there who didn't want a second season and enjoyed the ambiguity of the season one finale. "I hope they don't have a second series; as good as it was, I think the ending is quite fitting and poetic," one Reddit poster wrote. And a Twitter user said:

I want a season 2 for #TEOTFW but I also want to kind of leave the end at that.

Though not everyone was prepared for this story to continue, one thing's for sure: there won't be any shortage of viewers for it!

Image Source: Netflix
The End Of The F***ing WorldTV

Netflix
Too Hot to Handle: The Season 2 Cast Is Seriously Sexy — Here's Where to Follow Them
by Monica Sisavat 10 hours ago