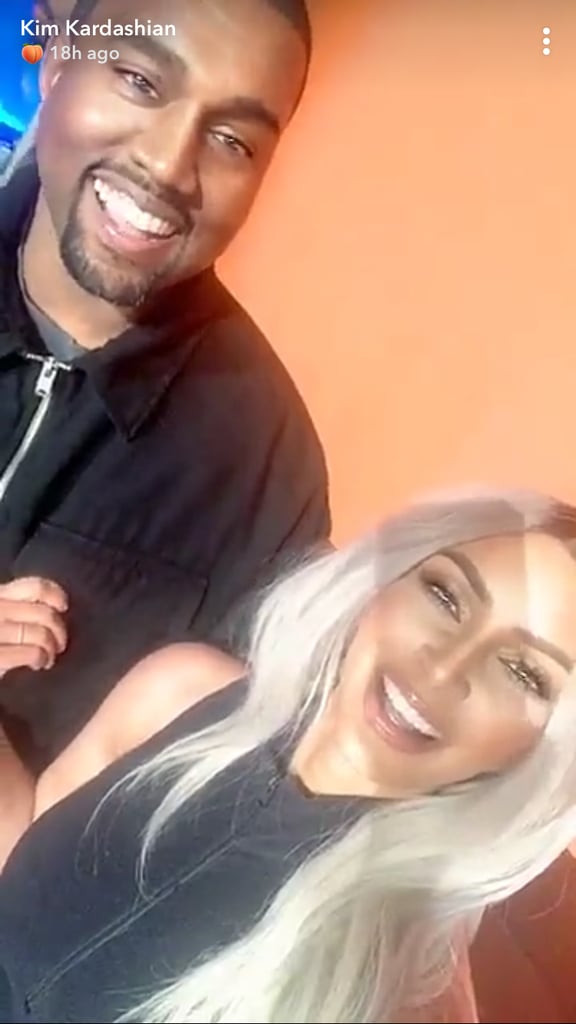 Kim Kardashian chose to rep her husband's last name when she joined his team for a recent taping of Celebrity Family Feud. The mum of three, who recently welcomed baby Chicago back in January via gestational carrier, took to Snapchat on Saturday to share the exciting news with her fans. "If you guys don't know, Kanye and I are the biggest fans of Family Feud," Kim shared. "Kanye said he waited his whole life for this moment."

The reality star continued, "I've jumped ship from Team Kar-Jen. I'm on Team West, guys. We're playing against the Kardashian-Jenners . . . and I have a really good feeling about this, that we're gonna win."

A pregnant Khloé Kardashian (and her growing baby bump) was also spotted backstage on Kim's Snapchat along with younger sister Kendall Jenner, mum Kris, and grandmother Mary Jo Campbell. Team Kardashian-Jenner didn't seem too happy about Kim abandoning them, though. "They won't let me in their huddle, guys," Kim joked in one video.

Sisters Kourtney Kardashian and Kylie Jenner, who welcomed baby girl Stormi Webster earlier this month, didn't appear in any of the videos. Instead, Kim's longtime BFF Jonathan Cheban tagged along for the Family Feud fun. Kourtney previously appeared on the game show in 2008 with Kim, Khloé, and Caitlyn Jenner. Keep reading to see more photos from the Kardashian-Jenners and Wests' fun night out ahead.

Celebrity Families
Meet the Other Half to Louis Tomlinson's "Lad and Dad" Duo, His Son Freddie!
by Emily Weaver 3 days ago