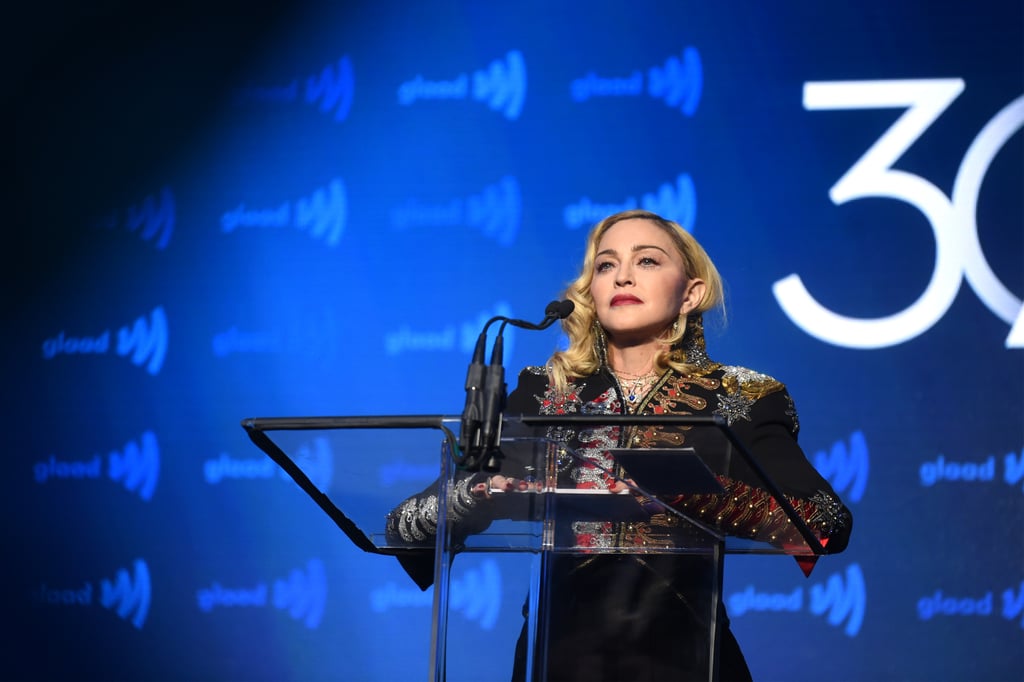 Madonna was honoured at the GLAAD Media Awards in New York on Saturday night. The 60-year-old pop icon — who recently graced the cover of British Vogue — was named the recipient of the Advocate for Change Award. She earned the cachet for her enduring efforts to promote equality and acceptance for the LGBTQ+ community. Rocking an embroidered ensemble, the singer delivered a passionate speech about spreading love and kindness and her personal connection to the LGBTQ+ community.

"The first gay man I ever met was named Christopher Flynn," she said. "He was my ballet teacher in high school, and he was the first person that believed in me. That made me feel special as a dancer, as an artist and as a human being." She then revealed her dance teacher took her to her first gay club in downtown Detroit, adding, "I finally felt like I was not alone, that it was OK to be different and to not be like everybody else."

She also discussed how the AIDS epidemic affected her after she moved to New York in 1977. "The plague that moved in like a black cloud over New York City and in a blink of an eye took out all of my friends," she said. "After I lost my best friend and roommate Martin Burgoyne and then Keith Haring — happy birthday Keith — I decided to take up the bull horn and really fight back."

The performer has been a longtime advocate for the LGBTQ+ community. Her 1991 documentary Madonna: Truth or Dare featured many of the dancers on tour with her at the time, who were gay and encouraged by Madonna to be themselves. Her latest single, "I Rise," is a tribute to the 1969 Stonewall uprising in which members of the LGBTQ+ community demonstrated against a police raid of a New York gay bar. She also often speaks out against anti-LGBTQ laws in countries such as the United States, Romania, Malawi and Russia and has performed at multiple AIDS benefit concerts. In 2006, she created her charity Raising Malawi to provide health care, education, and support to children in Malawi, Africa, who have lost parents to HIV and AIDS.

"As soon as you really understand what it means to love, you understand what it takes to become a human being," she continued at the GLAAD Media Awards. Ahead, watch more of her speech before viewing pictures of her at the event.