If you didn't think you could admire Cher and Meryl Streep anymore than you already do, think again, my friend. Cher visited The Late Late Show With James Corden, which you can watch on Sky One and Now TV on June 22 at 10pm, and shared a story that will turn the longtime friends from your onscreen heroines into real life idols.

Cher spoke to James about her role in Mamma Mia! Here We Go Again but also shared a story about the time she and Meryl helped a woman after she was attacked. The pair were in Manhattan trying to find ice cream, after Meryl reassured Cher the area wasn't dangerous. However, while on their search, they stumbled upon a woman who had been attacked. Cher recalls she was more concerned with being saved by Hollywood royalty than she was about her torn clothes — watch the video above to hear her tell the full story. 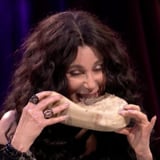