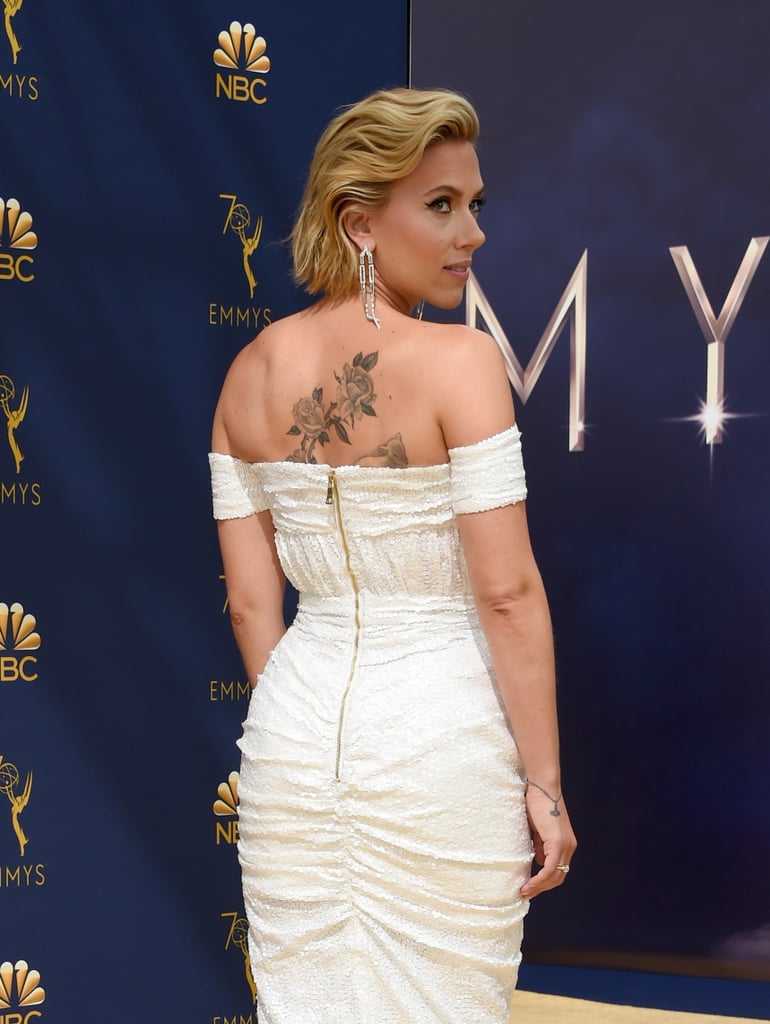 In case you missed it, Scarlett Johansson stepped out at the 2018 Emmy Awards with her large back tattoo on display — but it's not the first time we've seen it! Scarlett had her ink on display both at the Met Gala and the premiere of Avengers: Infinity War earlier this year, but somehow no one's been talking about it until now.

Her tattoo, which appears to be roses on a vine, could very well be a tribute to her daughter, Rose. The flowers creep up the centre of her back, next to her lamb tattoo that she's had for a while. The first official glimpse we got of the new ink was actually at the American Museum of Natural History's 2017 Museum Gala in November, but she was spotted on set for Avengers:Infinity War last August with the tattoo. However, in June 2017, at the premiere of Rough Night, Scarlett's back only had the lamb ink, so thanks to our detective work, we can safely say she got the roses sometime in that window.

The roses add a delicate touch to Scarlett's other tattoos. Besides the lamb on her back, she also has a colourful sunrise on her arm, a bracelet around her wrist that says "I ❤ NY," two circles on her ankle, "Lucky You" and a horseshoe on one side of her ribcage, and more flowers on the other side.

Keep reading to see Scarlett's beautiful roses from all angles on the red carpet and get inspired by one of these rose tattoos for a little bit of ink of your own.

Tiny Tattoos
Blue, Purple, Red, and More — These 23 Colour Ink Tattoos Ideas Will Brighten Up Your Life
by Danielle Jackson 1 week ago