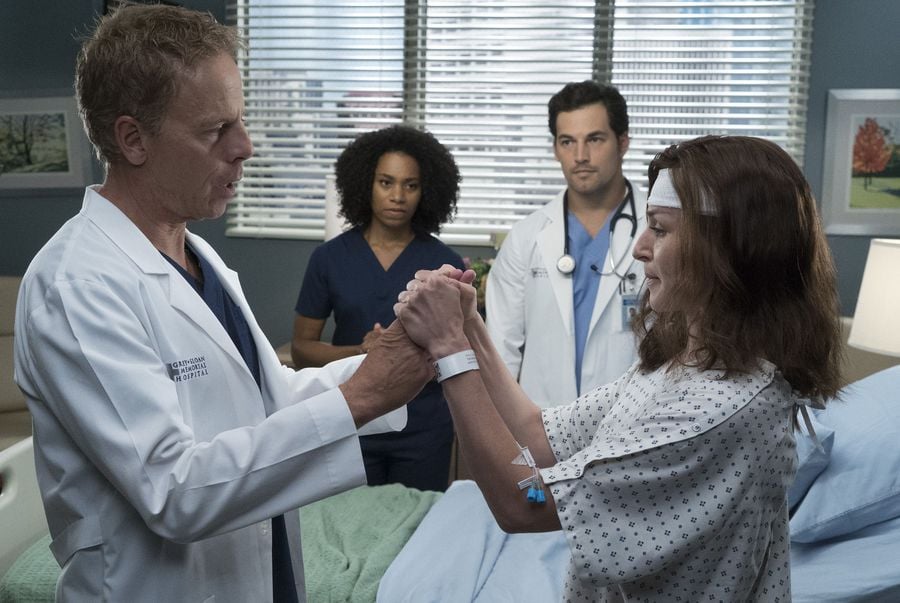 Suffice to say, things have been a little rough for Amelia on Grey's Anatomy. She's somehow coolly managed a crumbling marriage and major brain surgery. So, in typical Grey's fashion, things get tougher just when she's getting back into the groove of her job. In the latest episode, Amelia and Alex devise a research proposal for the surgical contest to help their 12-year-old patient with a brain tumor. The doctors don't get selected for the contest, which means they have no funds to launch their research. Whatever will they do now?

Of course, Amelia can recruit her very smarmy and handsome colleague, Dr. Tom Koracick, the same surgeon who took out her brain tumor. According to ABC's new press release, Amelia will consult the neurosurgeon for advice on helping her cancer patient in the upcoming Grey's Anatomy and Station 19 crossover episode.

We know that briefly after Koracick takes out her tumor, they have a very passionate hookup in one of the on-call rooms. Koracick tells Amelia that she's a better surgeon than him, a line that he claims to have used to hook up with her. But I don't think it's just a pickup line — I think that he probably cares for her despite his facade of being a megalomaniac.

The two neurosurgeons will probably hook up again after working with each other. Whether or not their relationship lasts is another matter. It's obvious that Koracick and Amelia are way more evenly yoked than Owen and Amelia. Previously mentor and student, they're both hotshot heads of neurosurgery who are a hair overconfident in themselves. They obviously trust each other professionally and have an easy chemistry. It'll be interesting to see how their relationship plays out after they help Amelia's patient. While DeLuca and Amelia have shared sweet moments, I don't see them getting together anytime soon. The young resident appears to be occupied with Sam, an old flame who now interns at Grey Sloan. And though I think Owen and Amelia truly cared for one another, they probably won't work out in the long run.

The showrunners certainly don't have to rush in a new man for Amelia, who needs time to process all of the major changes in her life. Still, what would Grey's be without steamy hookups and insatiable romantic dramas?