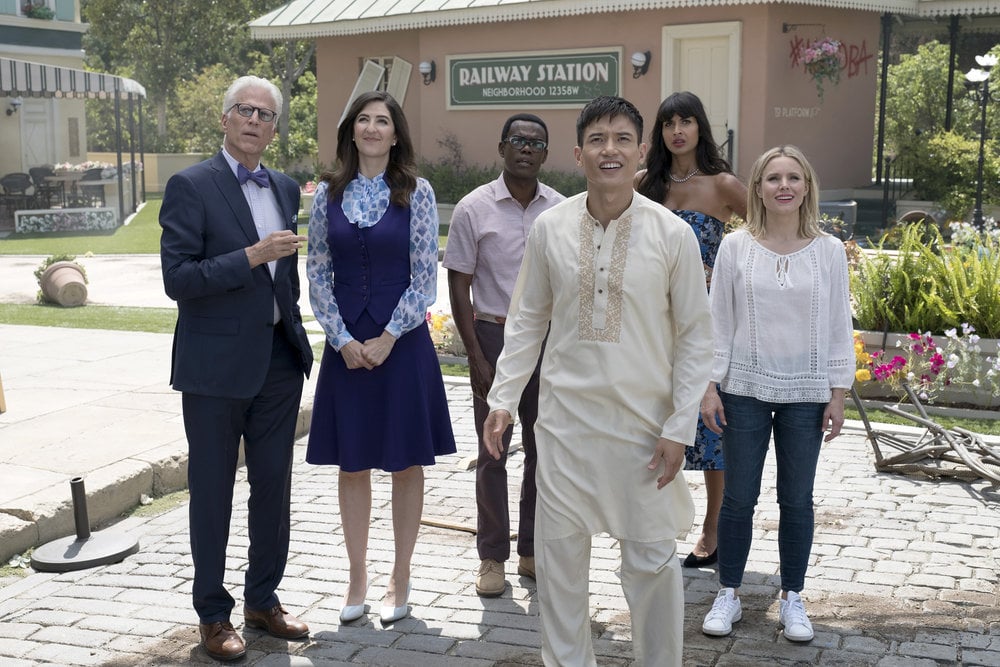 There's a scene in the second season of The Good Place where, in order to illustrate the classic moral dilemma known as The Trolley Problem, the characters are forced to live it. The famous thought experiment, which asks different variations of whether you would steer an unstoppable trolley into one person to avoid killing five, has long been a go-to for ethics scholars — but watching the show's hilariously gory take on it brought the lesson to life in a way Agnes Callard, an associate professor of philosophy at the University of Chicago, hadn't considered before. "There's something very violent about the thought experiment itself, like, we're asking them to imagine murdering people," Callard told POPSUGAR. "And the show just takes that really seriously, like, 'OK, let's really imagine it.'"

All four professors said they don't really see it as being about heaven or hell. Instead it's about the kinds of questions philosophy aims to answer: What makes someone good or bad? What matters? How should we treat other people?

It's just one of the ways tuning in to the sitcom (which is available on Netflix in the UK) has been a fun first for philosophy and ethics professors like Callard who aren't used to seeing their area of expertise at the centre of a hit network comedy. Callard and the three other philosophy professors/The Good Place fans we talked to said that while pop culture has always reflected on philosophical themes, they don't remember a show or movie ever examining specific theories and works this explicitly. The little Easter eggs creator Michael Schur has included in the series so far go beyond sneaky references to the Parks and Rec universe. There are plenty of nods to the world of academic philosophy, too. Season one introduced the show's philosophical foundation by way of actual mini lectures on how to be a good person from ethics professor Chidi (William Jackson Harper). But after the just-finished season two's even deeper dive into questions of what it means to be good, the real-life philosophers said they can't wait for season three.

Back in Autumn 2015, UCLA ethics professor Pamela Hieronymi says she got an email from Schur asking if she would be willing to discuss some ideas he had for a new project. "He wanted to pick my brain about ethics," Hieronymi told POPSUGAR. "And I think that's because he saw a paper on my website that sounded like the issues he was interested in about the motives for becoming a better person and whether it's possible to become a better person." The two spent about three hours chatting over coffee, Hieronymi said. About a year later, she spotted a billboard for The Good Place. After reaching back out to Schur to congratulate him, Hieronymi has occasionally served as a philosophical sounding board for the show's writers, even visiting the studio at one point to teach them about The Trolley Problem and other lessons.

"The philosophy is working at two levels," Hieronymi said of the show, which she's watched from the beginning. "So, there's the obvious level where Chidi is giving little lessons and namedropping both classic philosophers like Plato and Aristotle and Kierkegaard and contemporary philosophers, which is really kind of wild . . . but then there's the actual more serious exploration of those issues that are taking place in the story line and with the characters." Though the show is set in the afterlife — a topic that's been examined by philosophers for centuries — all four professors said they don't really see it as being about heaven or hell. Instead it's about the kinds of questions philosophy aims to answer: What makes someone good or bad? What matters? How should we treat other people?

That last question comes up a lot, specifically in references to philosopher T.M. Scanlon's book What We Owe to Each Other" (it's even part of the clue to help Eleanor and Chidi reconnect after the season one twist). The idea that the show uses modern-day philosophers like Scanlon, a professor emeritus at Harvard, has been especially exciting for fans in the academic community. Jason Bridges, an associate professor at the University of Chicago who specialises in the philosophy of action and the philosophy of the mind, studied under Scanlon, and said that specificity has been one of the highlights of watching the show. "Certainly I've never seen a show where books that are on my shelf, and not just classic works, recent works of philosophical ethics, keep popping up as props," Bridges said to POPSUGAR. 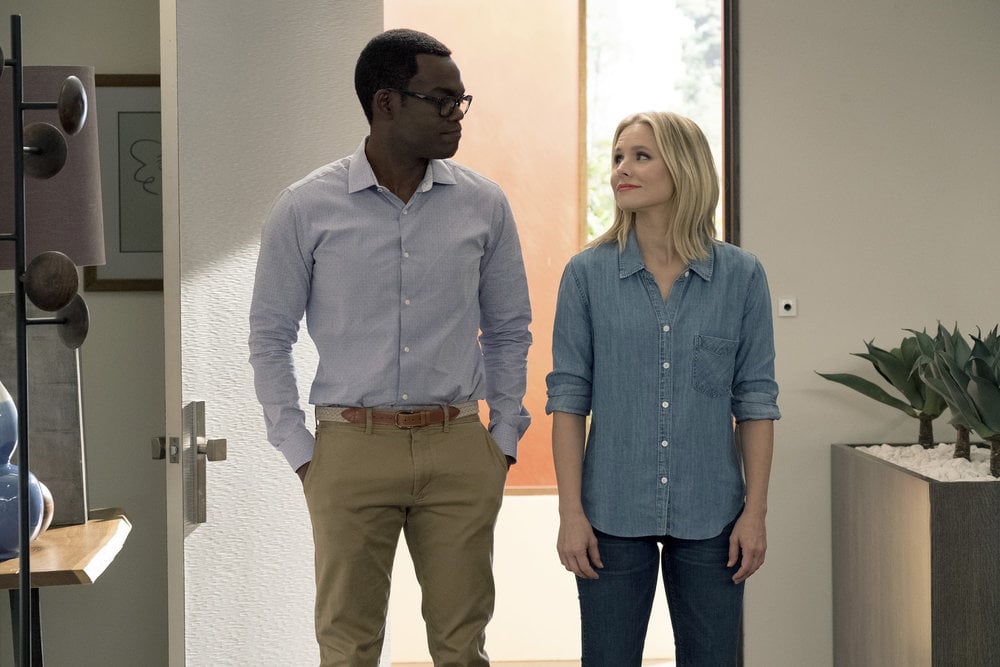 Seeing the life of an ethics professor on the small screen is another treat, according to the professors, but they had mixed feelings on whether they identified with the neurotic Chidi. Bridges said he likes the character but doesn't see a big connection between Chidi's neuroses and his interest in philosophy (though he did admit "moral philosophers may be more prone to stomachaches than the average person."). Callard, too, said the portrayal of Chidi as being nerdy and boring doesn't represent the philosophers she knows. ("I much more identify with Eleanor," Callard said.) But fellow University of Chicago professor Candace Vogler said the idea of a philosopher "actually taking ordinary choices fairly seriously" is familiar. And Hieronymi said she has seen other philosophy professors post joking warnings on Facebook for colleagues to strive not to be like Chidi. "The indecisiveness is a real phenomena," Hieronymi said. No one took offence at the show's running joke that everyone hates moral philosophy professors. Chidi's portrayal also just gives average viewers a playful peek into the world of a philosophy academic, Hieronymi said. "This show is more of what [The] Big Bang [Theory] was for science graduate students."

For viewers who've never taken a philosophy class, the professors agreed that the show is giving the field some potentially valuable exposure, even if Eleanor does complain about her ethics lessons being boring. Vogler said she's recommended The Good Place to introductory-level students. Hieronymi's heard about other professors using the show itself as a teaching tool. Though Callard, Hieronymi, Bridges, and Vogler recognise that Chidi's teachings are extreme simplifications of the complicated, nuanced theories they teach, and some of them had picked up on small issues (Vogler wasn't a fan of Chidi's reading of Kant, for example), the bigger-picture questions the characters address show that philosophical thinking can be practical — and compelling — for everyone. "Philosophy seems like a rarefied thing to study," Bridges said. "It seems like perhaps an impractical thing to major in, but what it does, if you study it, is cultivate ways of thinking and writing and communicating that are of general value and of use to a whole range of careers and human endeavours, and so this show helps illustrate that."

Bridges says he thinks the topic of free will would be a no-brainer for season three, which we can maybe expect in the Fall. Hieronymi would be interested in seeing the show dig deeper into the timely issue of people getting defensive and having trouble taking constructive criticism about their actions. Whatever direction the show's writers take, the professors said they've loved seeing the creative team take the public's growing interest in self-reflection and run with it in such imaginative, accessible ways.

"Just the fact that the central problem for the characters is to try to figure out how to be better people and the thought that selfishness and narcissism are huge obstacles that people have to overcome in order to become better people," Vogler said. "That's profound."

Squid Game
Rami Malek and Pete Davidson Recap Squid Game in a Country Song, and We Can't Stop Singing It
by Yerin Kim 21 hours ago