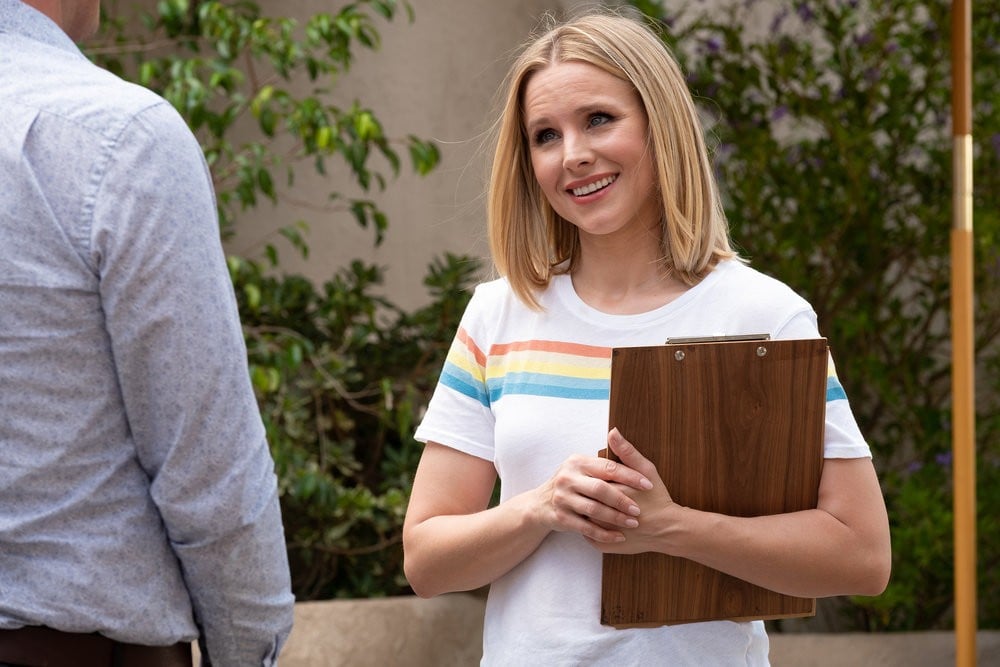 Wondering If Anything Is Worth It After The Good Place's Heartbreaking Season Finale? Same!

Warning — spoilers for The Good Place season finale ahead!

The Good Place has officially wrapped it's third season and they did it by emotionally devastating us. Season three's finale picks up right after Michael has his panic attack while worrying that his plan to show Judge Gen that humans can become better people will be an "epic fail." Eleanor smoothly takes his place as the welcoming face for the recently arrived John, introducing herself as "the architect." (She tells him that Michael is her new assistant who was recently transferred over from dog heaven, but who would ever leave there?) John has way too many questions, so Eleanor passes him off to Janet while she informs the rest of the Soul Squad about the new change in plans.

As Eleanor settles into her new role — which she gleefully tells Chidi she's a natural at because "I'm a world-class liar, baby!" — Tahani learns the startling fact that she actually knows John from Before. Or rather, he knows her. Jon was a gossip blogger who wrote vicious things about Tahani and obviously still has some venom in him judging by his comment about Tahani's "new nose." Tahani finds the group to share her realisation that the humans who were chosen for the experiment are "the people who would be the worst for us." That's pretty much confirmed when the next new resident arrives — Chidi's ex-girlfriend, Simone.

Related:
Kristen Bell Is 1 of the Few People Who Knows How The Good Place Ends, and She . . . Forgot

Judge Gen rules that Simone must stay, since there aren't any rules against the humans knowing any of the Soul Squad, but grants that Michael can erase her memories of Chidi and the gang. But the thought of having to see and teach his ex ethics is a little too overwhelming for Chidi to handle. He tells the gang that the only solution is to erase all of his memories and reboot him completely, so his inevitable awkwardness around Simone won't ruin the experiment. Even though Eleanor is staunchly against the idea, Chidi's resolve is firm. The two decide to spend one last night together and Michael gifts them with a montage of their romantic moments that would reduce any "Cheleanor" fan to tears. Even though their relationship seems totally doomed, Eleanor keeps a small nugget of hope saying, "We've found each other before hundreds of times. We can do it again."

When Eleanor seeks some answers from the all-knowing Janet, the guide admits that she doesn't have anything for her. But, in a profound moment between the two, Janet muses that maybe not having answers to the human heart is exactly what makes humanity so fun and special. That throughout all the "randomness and pandemonium," Eleanor and Chidi found each other and had a life together, which is remarkable. To which an inspired Eleanor decides to "find happiness in the unique insanity of being here, now," and opens the door to greet a recently rebooted Chidi.

Yeah, this season finale went there. This is the third time The Good Place has thrown us for such a doozy, and at this point none of us can predict where the show will go next! Fans are torn between loving such a great finale while rageing at the unfairness of it all, and the feeling is forking relatable. Check out some of the best reactions ahead, as we replay that "Cheleanor" montage for the umpteenth time in a row.

Related:
41 Moments Between The Good Place's Eleanor and Chidi That Are So Forking Romantic
0
previous images
-1
more images
Previous Next Start Slideshow
Twitter ReactionsThe Good PlaceTV
Around The Web

Netflix
Unsolved Mysteries: Where's Lena Chapin? Here's What We Know About Her Case
by Stacey Nguyen 2 days ago

Netflix
Unsolved Mysteries: What Happened to Patrice Endres? Here Are 3 Theories
by Stacey Nguyen 8 hours ago

Netflix
Unsolved Mysteries: Breaking Down Each Case Featured in Season 1 of Netflix's Revival
by Stacey Nguyen 2 days ago

Netflix
Unsolved Mysteries: 3 Theories on What Happened to Rey Rivera
by Stacey Nguyen 3 days ago