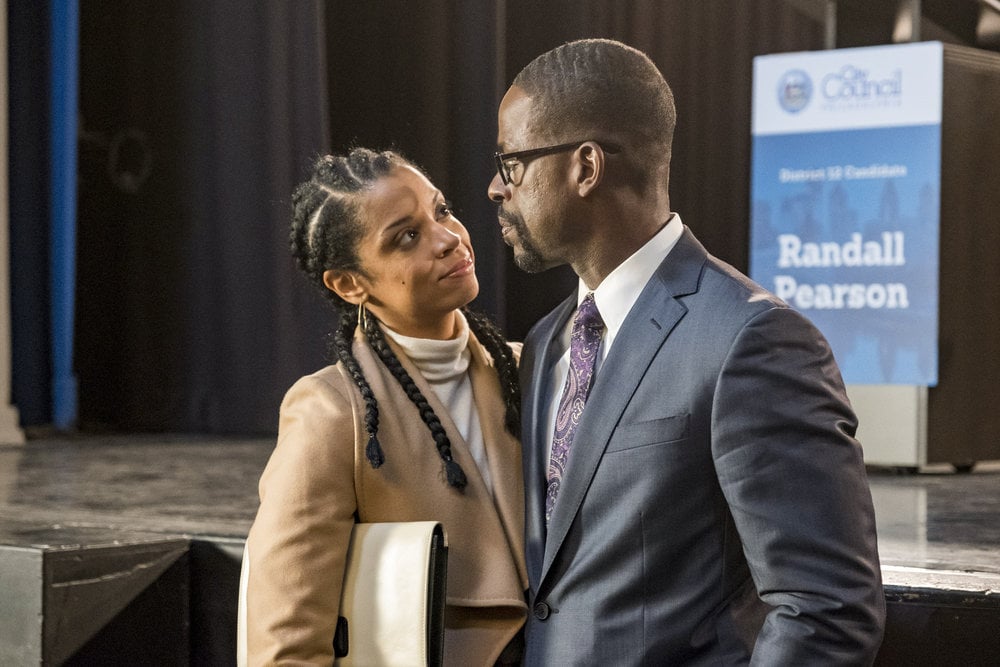 Warning: This post contains spoilers from the jaw-dropping Fall finale of This Is Us.

The midseason finale of This Is Us is an emotional roller coaster. While some questions are answered — like who "her" is, and if Nicky is alive — other questions are ignited and left wide open, and it's driving fans insane. One question in particular being: Will Beth and Randall get divorced? We witness a rift in their relationship when Beth asks Randall to drop out of his council race and he refuses, resulting in him sleeping on the couch. But it's the flash forward that's raising eyebrows.

The question of who is "her" has been theorized about since the season two finale, when an elderly Randall and an adult Tess reveal they're going to see someone. During Tuesday night's episode, it's revealed that the "her" is Rebecca. In the flash forward, Randall asks Tess if she called her mom to tell them they were on the way. In the same scene, we see Beth overlooking a skilled ballet group speaking with her assistant, who tells her that Tess called. Beth tells her assistant they are going to see Randall's mother. While many people are curious why Randall wouldn't just call his wife, suspecting they are divorced, let me just say that as a child more technologically savvy than my parents, it's not weird to ask the child to call the other parent.

It wouldn't be out of the ordinary for producers to want us to think that Randall and Beth have split, especially following the present-day fight. However, a keen-eyed Reddit user pointed out that in the flash forward from the first episode of season three, Randall is wearing his wedding ring. Sure, it could mean that they split up and Randall has remarried, or that their relationship is as stable as it's always been portrayed throughout the series thus far.

The future of Beth and Randall....season 3 ep1 ending. from r/thisisus

One comment on the Reddit post said it best: "If we are led to believe that Randall is Jack personified, then we should also believe Randall will fight for his marriage like Jack did." Back in February, Sterling K. Brown reminded us that Randall and Beth are "R&B! And they're going to be JUST fine, no matter what."

Don’t you worry about Randall and Beth. They're R&B! 🎶 And they're going to be JUST fine, no matter what. #ThisIsUs

Do you think Beth and Randall will make it through their rough patch, or will they end up divorced in latter seasons? Let us know in the comments!