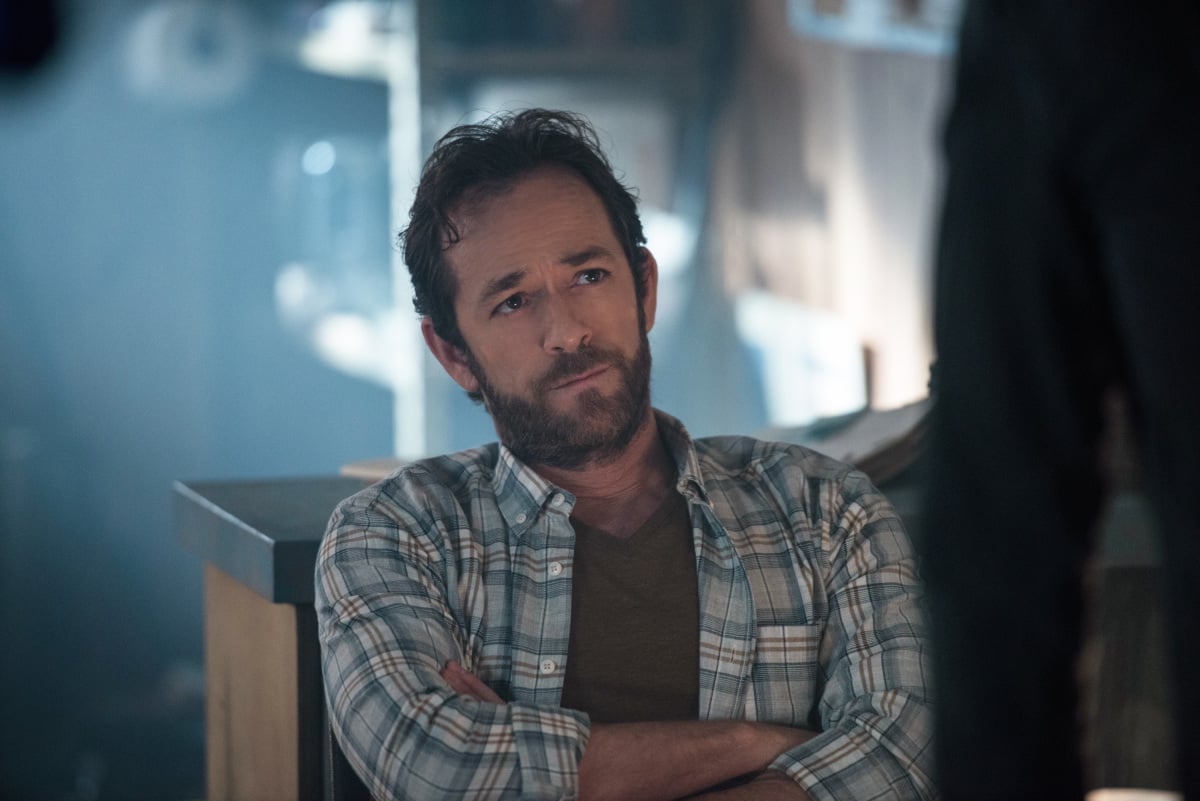 Riverdale's season four premiere, titled "In Memorium", finally dropped onto Netflix on Thursday morning, and to say it was emotional would be an understatement. "I think it's a real tribute to Luke," showrunner Roberto Aguirre-Sacasa said during the Television Critics Association summer press tour. "I think it's a real tribute to Fred. I think it's very cathartic to watch it and I think everyone really came together, specifically to tell this kind of story, the honour Luke and honour Fred . . . It's a really simple — it's one of our . . . just beautiful."

The episode also featured a special appearance by Perry's former Beverly Hills, 90210 cast mate, Shannen Doherty, which was confirmed at San Diego Comic-Con in July. Doherty also posted about the news on Instagram with two photos of her and Perry. "I am deeply honored to pay tribute to Luke on Riverdale," she wrote. "The care in which this show takes in honoring his memory is beautiful. He is missed. Today. Tomorrow. Forever."

In the premiere episode, it was revealed that Perry's character Fred had died in a hit-and-run accident that occurred after he stopped to help a stranded motorist, played by Doherty. Archie meets her character at the location of the accident, and she tells him the story of exactly what happened to his father. They then, along with Jughead, Betty, and Veronica, join hands and are overwhelmed with emotion as Doherty recites the Lord's Prayer. Archie then sets out to avenge his father by tracking down he motorist that killed him, but in the process, he finds out the man was covering for his terrified teenage son.

At Comic-Con back in July, Aguirre-Sacasa revealed that Doherty's casting was something Perry had wanted since season one. "They were such good friends, and when we were putting together this tribute episode, we wanted to make it as special as possible," he said. "And so we asked Shannen to do a pivotal, super-emotional role. She read the script and immediately said 'yes.' It's very impactful." At the time, Doherty posted about the news on Instagram with two photos of her and Perry. "I am deeply honoured to pay tribute to Luke on Riverdale," she wrote. "The care in which this show takes in honouring his memory is beautiful. He is missed. Today. Tomorrow. Forever."

In the final minutes of the episode, Archie drives a hearse carrying his father's body home from Cherry Creek to Riverdale. With a police escort by FP, and the support of his friends, Archie makes his way through the people-lined streets of Riverdale, back to the house he shared with his dad. At Fred's funeral, Josie sings an emotional rendition of "Amazing Grace", and, as with the rest of the episode, it's impossible to pretend that the emotion on every cast-members' face is anything but real.

"My dad was here for every high and every low. He was the greatest man I've ever known," Archie said of his father in a eulogy speech. "It hurts me that I never got to say goodbye, that I won't be able to see him again or talk to him, but his spirit and his memory lives on in this town and everyone he's met. Fred Andrews will always be a part of Riverdale. I love you so much dad."

Aguirre-Sacasa first announced the season-opener would include a tribute to Perry in June. He took to Twitter to share a photo of the script for the episode. "Probably the most important episode of #Riverdale we'll do this year, if not ever," he wrote. "A tribute to our fallen friend. Thankful for this opportunity to honor Luke & Fred."

Probably the most important episode of #Riverdale we’ll do this year, if not ever. A tribute to our fallen friend. Thankful for this opportunity to honor Luke & Fred. ❤️🏆💎👨🏻‍💻 pic.twitter.com/MH7xOjNyDu

Perry — who died at the age of 52 in March after suffering a massive stroke — made his last appearance as Fred Andrews in April. In this episode, Riverdale is addressing the absence of his character for the first time. However, the remaining episodes of season three were dedicated to Perry, as were all future episodes.

Following Perry's death, many of the Riverdale castmates shared emotional tributes to the actor, who had been on the show since its 2017 debut. Lili Reinhart even posted an emotional poem about grief and losing someone close to you. Cole Sprouse also exclusively told POPSUGAR, "He was very close to all of us. And he was an incredibly passionate, well-loved person, and I think the whole world is lamenting his passing."

This premiere episode ofRiverdale's fourth season is available to stream on Netflix now.