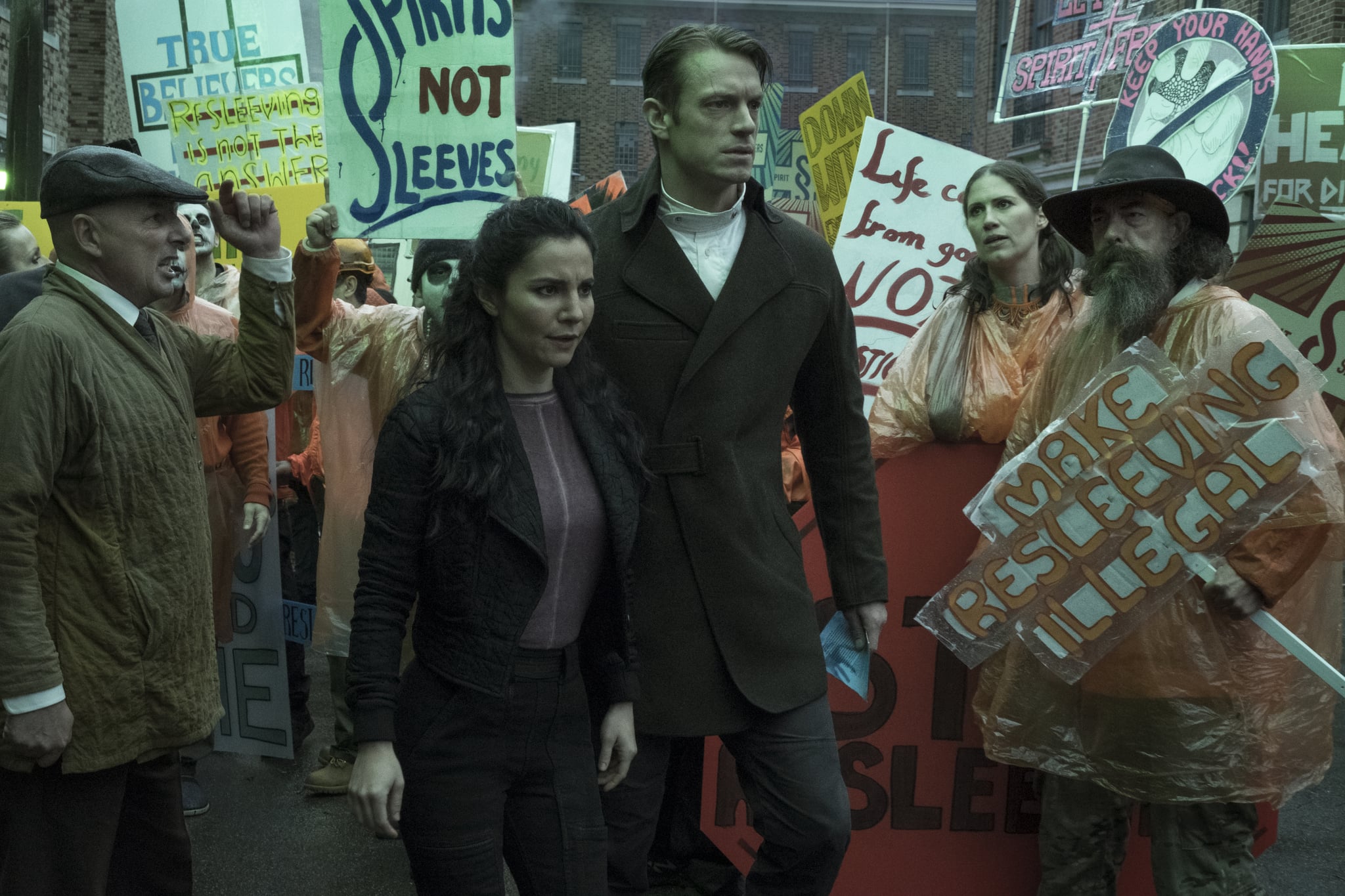 Summing up the plot of Altered Carbon is not a task so easily done. As visually stunning as the sci-fi series is, the amount of story crammed into its 10 episodes is relatively daunting. That being said, if you're a fan of lauded genre films like Blade Runner, Gattaca, and Minority Report, this slick, neon-soaked noir will no doubt suck you in.

Based on the novel by Richard K. Morgan, the series drops us far, far in the future, where the human race has the ability to download consciousness into empty bodies, aka "sleeves." Of course, only the very, very rich can keep this up, since resleeving — essentially living forever — costs a pretty penny (especially if you want to choose which sleeve your consciousness ends up in). Naturally, this results in some pretty devastating class divisions.

We're introduced to this bleak, dystopian world through Takeshi Kovacs (Joel Kinnaman), a prisoner and former supersoldier (an "Envoy") with a sketchy past who is awoken from a 250-year-long sleep for one purpose: to solve the mysterious murder of one of the city's wealthiest men, Laurens Bancroft (James Purefoy). Funnily enough, Bancroft is still alive. Or, at least, his consciousness is.

It turns out that Bancroft, who basically lives in a floating castle in the sky, is so rich that he's able to have his consciousness downloaded every 24 hours to a satellite (think of it like syncing your iPhone with the Cloud). Whoever killed him did so before his consciousness could sync, leaving him with a gap in memory and no idea who tried to take his life. Kovacs is sucked into this mystery by Detective Kristin Ortega (Martha Higareda), who has no time for Kovacs's cynical, melancholic moods. In order to win his freedom, he has to help her unravel the complex mystery of Bancroft's killer, and he makes a ton of life-altering discoveries along the way.

Although Altered Carbon can feel bloated or bogged down by the overly complicated subplots at times, showrunner Laeta Kalogridis ensures the series raises thought-provoking questions. For instance, can morality even exist in a world where no one fears death? Or how about the ethics of putting the consciousness of an Asian man inside the body of someone white (Kovacs is initially played by Will Yun Lee, before Kinnaman takes over), which is, unfortunately, reminiscent of Hollywood's enduring whitewashing problem.

Luckily, there's also a lot to love about the 10-episode series. The elaborate sets and CGI are equally spectacular, and the show undoubtedly features stand-out performances from female actresses like Higareda, Kristin Lehman, Renée Elise Goldsberry, and Dichen Lachman. Altered Carbon might be too much for you to digest in one sitting, but it's worth staying on the mind-melting futuristic adventure until the very end. Altered Carbon is available to stream on Netflix starting Feb. 2.