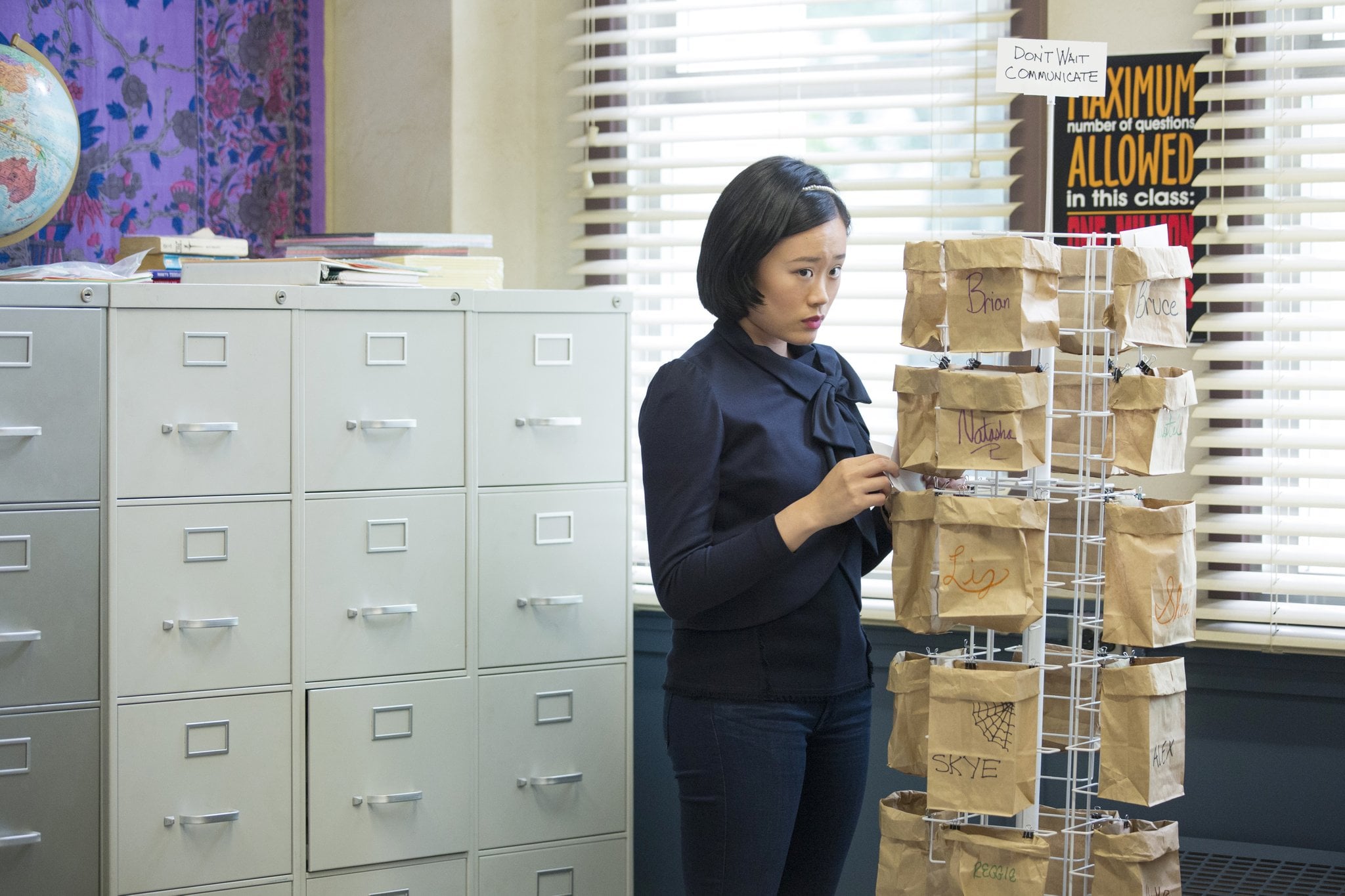 Don't let her sweet, innocent face fool you. Even though Courtney Crimsen is an A-plus student and an honour Board member, she plays a villain in Hannah Baker's story. Her fickle friendship and act of betrayal are the subjects of the fifth tape from the first season of 13 Reasons Why. But before we begin, let's rewind to the fourth episode where the girls form an unlikely bond over the ancient art of napping in class.

During the course of their brief conversation, Hannah reveals her suspicions about having a stalker. The audience already knows the culprit is Tyler Down, but in the moment, Hannah believes it may be the creepy old dude from down the street. Intrigued by the excitement, Courtney decides to help and suggests they set a trap.

Later that evening, the pair settle into Hannah's bedroom. The plan is to use a powerful flashlight to startle the intruder and reveal his identity. As the girls wait, they begin drinking and playing a game of "Truth or Dare" that ends with Courtney daring Hannah to kiss her. Soon the telltale camera clicks ensue, alerting Hannah to danger. Fortunately, she's able to flash the light and reveal Tyler. Unfortunately, he captures the girls kissing on film, and the photo emerges at school.

At first, no one recognises the shadowy figures in the picture. But by the fifth tape, when the girls attend the Winter Formal together, Montgomery de La Cruz realises the truth. He grabs Courtney on the dance floor and says, "Maybe you and Hannah are up for some fun late . . . Yeah. You're fun girls, right? I mean, that's what it looks like in the picture."

Related:
13 Reasons Why: The Girl on Tape 9 Isn’t Such a Big Mystery After All

In a desperate attempt to save her reputation and hide the truth about her sexuality, Courtney concocts a vicious rumour that Montgomery uses against Hannah when she refuses his advances: "Courtney says you asked her for a three-way . . . she confirmed that not only did Justin finger you, but you went down on him."

Enraged, Hannah confronts Courtney, but her so-called friend only offers a weak apology, prompting Hannah to declare, "You don't get to f*ck with my life because you don't like who you are."

Which brings us to the big question behind Courtney's story — will she ever be able to own her truth? Clay Jensen attempts to make her aware of this question when he leads her to Hannah's grave, but she refuses to take responsibility. Then Courtney calls a meeting with five of the students named on the tapes in hopes of convincing them to paint Hannah as a liar. During the meeting, Ryan Shaver maligns Courtney's self-serving attitude and her insensitivity toward Hannah's plight. Nonetheless, our perfect princess remains unmoved despite knowing the reality behind each tape. To make matters worse, she ends the meeting with a cryptic declaration: "Hannah's truth is not my truth. No way."

Our final image of Courtney is in her deposition. She calls Hannah an acquaintance and refuses to acknowledge the infamous photo. However, her face reflects an internal struggle that we can only hope is a realisation that sometimes the hardest thing and the right thing are the same.