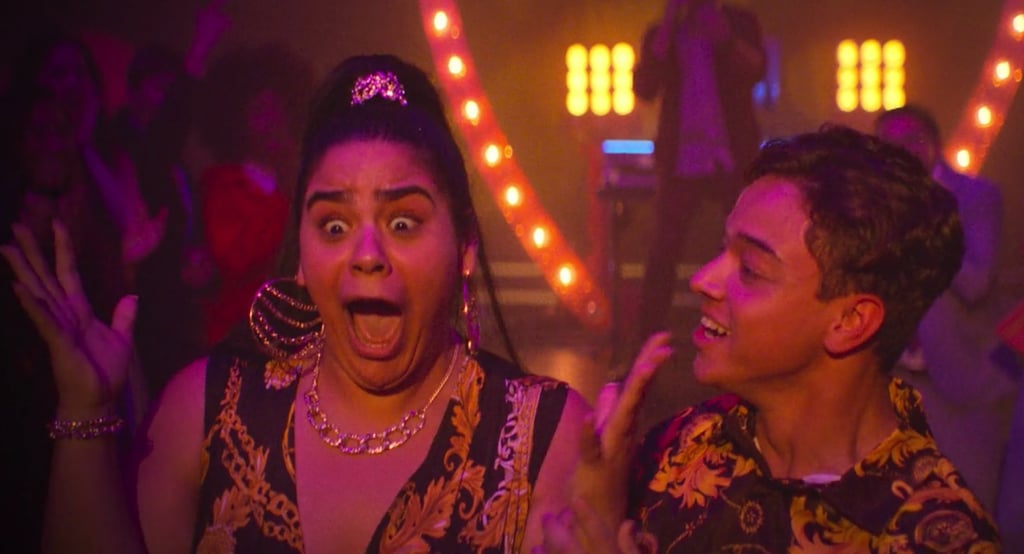 Warning: Spoilers for On My Block season two below!

Something that I definitely did not expect the second season of On My Block to do was make me cry during a scene all about Jasmine. The bold and hilarious character, played to perfection by Jessica Marie Garcia, is so often cracking one-liners and sassing her friends that the emotional beats in the season's fourth episode, "Chapter Fourteen," took me by surprise. And you know what else took me by surprise? Her incredible dance routine with Ruby (Jason Genao).

The episode centres around the Valentine's Day dance at Monse, Jamal, Cesar, and Ruby's high school. The gang soon finds themselves busy trying to figure out their plans for the big event. Monse and Cesar quickly pair off, while Jamal gets roped into acting as a hall monitor at the dance by his former football coach, who figured out that Jamal dug up the football field. As for Ruby? Well, despite putting on a brave face for his friends, he's still dealing with the stages of grief in the aftermath of Olivia's death in the season one finale. Fortunately he has Jasmine on his side, since she's decided that the two of them are now best friends, whether Ruby wants to be or not.

Related:
On My Block Finally Gives Us an Answer About What Happened to Olivia

She initially rounds up a number of girls in their school to audition to be Ruby's date for the dance, much to the disdain of Monse. Jasmine makes sure the contestants are there for the right reasons — "If anyone is here to finger Ruby's bullet wound, please leave now" — but in the end Ruby decides that the only person he wants to take to the dance is Jasmine herself. Her reaction is truly adorable (blushing and taking a big puff of her inhaler) and instantly had me tearing up. Luckily the two of them were meant to be dates, because they show up in matching black and gold outfits and proceed to crush the event's annual dance competition.

Aided by the beats of Dillon Francis and Jarina De Marco's track "Look at That Butt", they bust out some coordinated, eyebrow-raising moves that include dropping it like it's hot, extreme ponytail whipping, and even a little motorboating (yes, motorboating). Oh, and they ALSO take home the grand prize of . . . drum roll please . . . a $50 gift card to Chili's! (How can you not love Jasmine after she breathlessly exclaims, "Guys, guys, if we play our cards right, we can totally stretch this out into two dinners.")

Relive the now-iconic On My Block moment by listening to "Look at That Butt" ahead, and then keep scrolling to see the hilarious reaction the scene has earned from fans so far.

Related:
53 Songs From the On My Block Season 2 Soundtrack That You Need to Listen to ASAP
Previous Next Start Slideshow
On My BlockTV