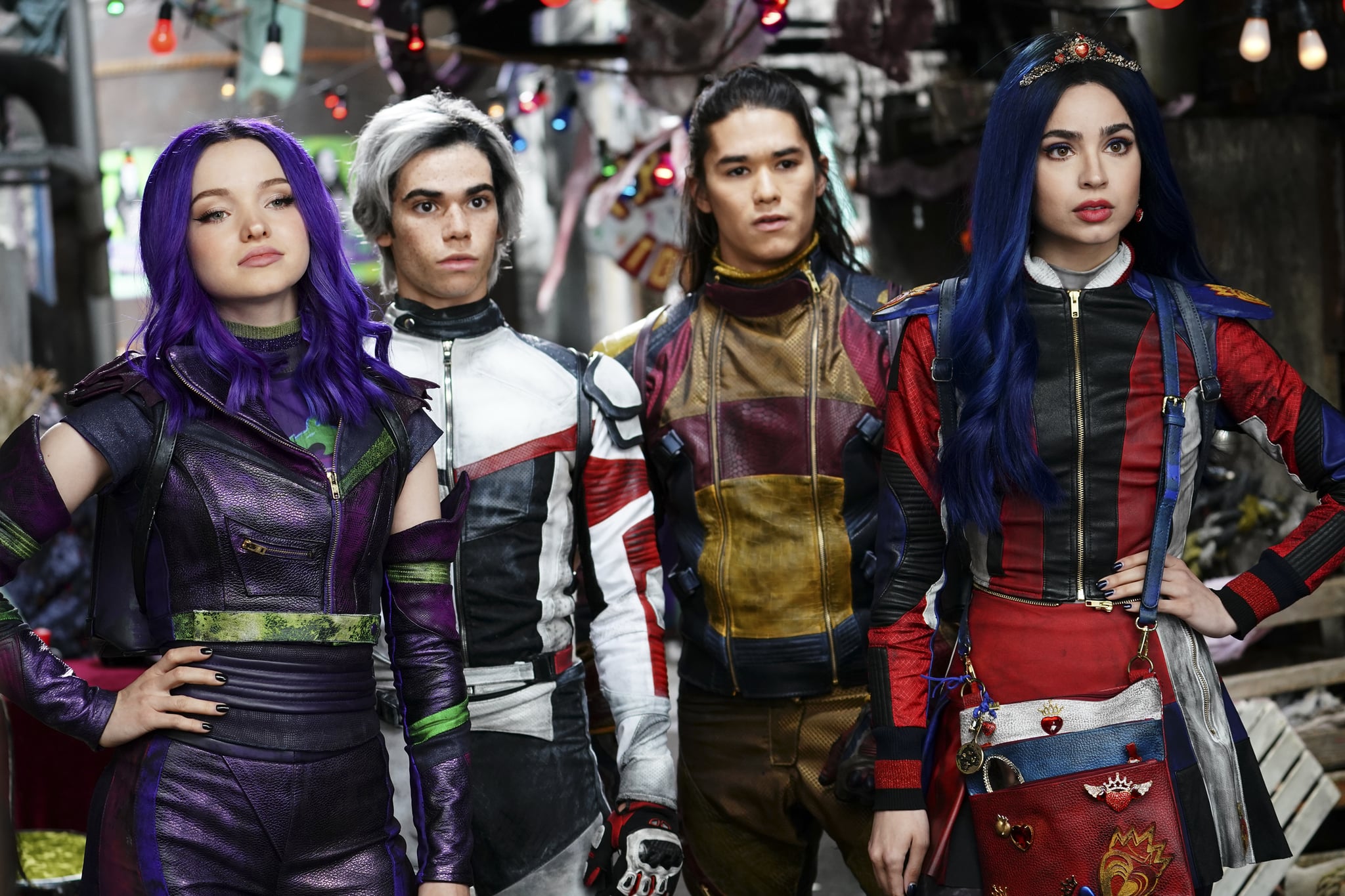 This Summer, Dove Cameron waved goodbye to a character who has been a huge part of her life for the last five years. As Mal in Disney's Descendants franchise, the 23-year-old triple threat won the hearts of kids and teens the world over as Maleficent's daughter, a villain kid with a heart of gold. But all good things come to an end, and Descendants 3, which finally hits the Disney Channel in the UK this month, is the final hurrah for Mal and her VK pals. For the actress, it's the end of a long but fun road. "We do it for three or four months out of the year, and then before that you're in prep for whatever is the next film, and then after that you go into promo, you do music videos, you do photo shoots, and green screen, and appearances in the Disney parks, and then you do press, so we've kind of been doing Descendants for, like, five years, six years . . . it always feels like returning to your double life or returning home," she told POPSUGAR when we met in London ahead of the film's UK release.

"Whatever kind of masculine energy she didn't have growing up, she kind of produced herself."

Where the first film focusses on Mal's relationship with her mother, this time around, we finally find out who her dad is. And without giving too much away, he's one hell of a guy. "I think Sofia [Carson, who plays Evie] and I had theories, where like maybe she's half human? We had all these different ideas, but it does make a lot of sense," Cameron said of the decision to introduce another character from the wonderful world of Disney as Mal's old man. But when it came to acting alongside her movie dad, she drew more from his absence in earlier parts of the story than his Disney background. "I think that is something that always kind of coloured Mal, where she was kind of scrappy, and whatever masculine energy she didn't have growing up, she produced herself, right, she's quite a scrappy tomboy-esque, kind of very balanced girl," Cameron explained. "The resentment that Mal has toward her father is something that you can bite into as an actor . . . 'I did without because you didn't show up for me,' I think a lot of people have that kind of feeling in their life," she explained. "When you meet them together for the first time in the film, I definitely wanted it to feel like she had all of these feelings for years, and this was her chance to rip him a new one."

And rip him a new one she definitely does, with all the usual VK attitude and punchy musical numbers. But the third film also gave her the opportunity to play around and have fun, too. "Mal's not a very comedic character, and I like to play comedic characters," she explained, confessing that it was "fun" to have the opportunity to dress up in prosthetics for one memorable albeit brief scene. "I really looked at Kenny [Ortega, the film's director] and was like, 'Is this gonna be worth it, for the hour that we're going to be filming this?'" She laughed, confessing that a face full of prosthetics "can feel quite claustrophobic . . . I would have to take it off during lunch, so you just see me like wandering around with this waddle neck thing!"

Part of the appeal of Descendants is that, though it's based on known Disney characters and stories, it introduced a whole new group of characters for a new generation. "It's always been its own thing . . . there's nobody who had watched Maleficent with Angelina Jolie and then was like, 'You have to be like that,'" Cameron explained when I asked if fans had ever turned the tables and given her advice. "Mal has never existed before, so it's not like they're like, 'You're playing Mal wrong.' We kind of created these people and then people did with that what they wanted." 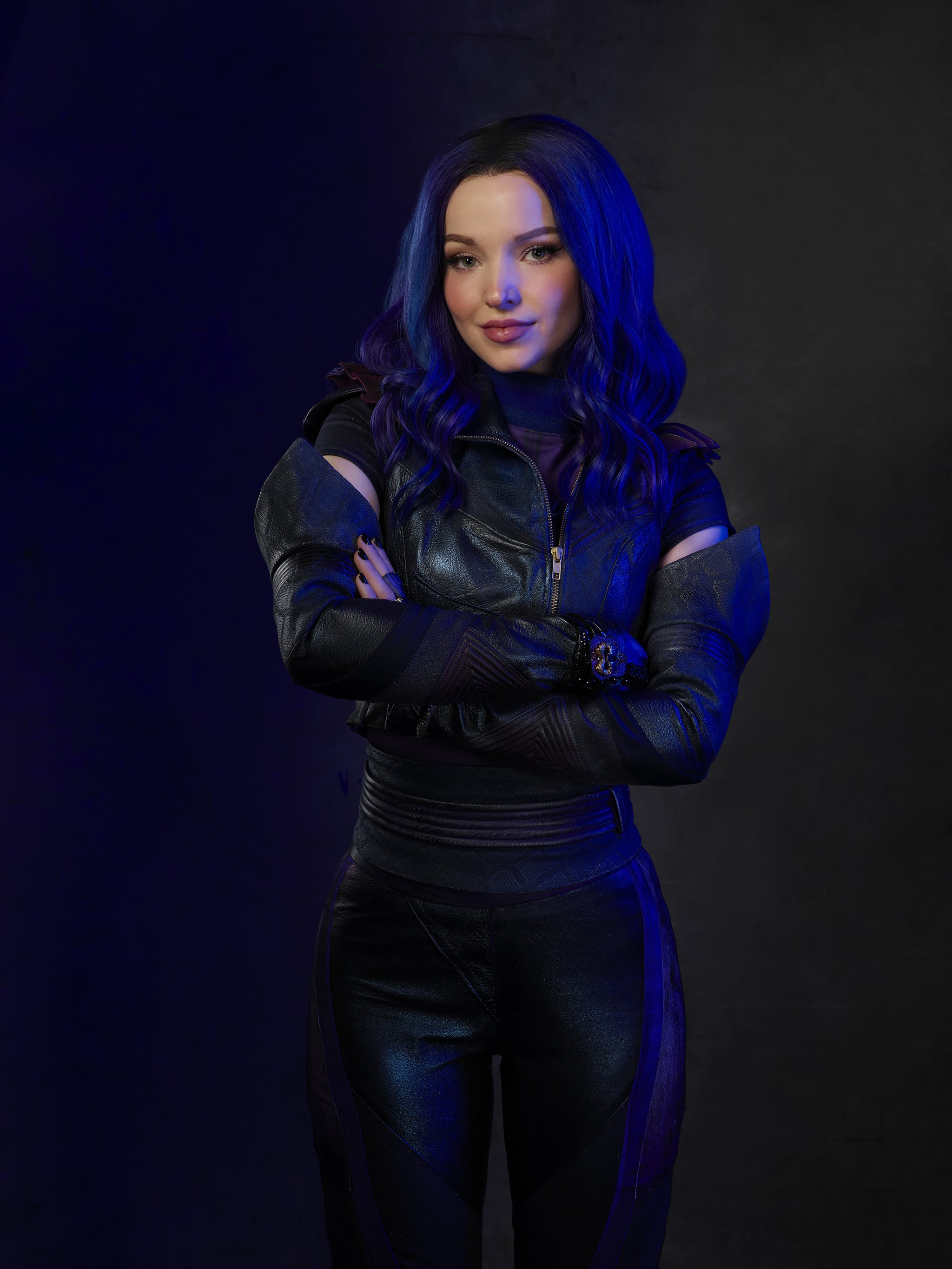 But after devoting half a decade to the purple-haired heroine, Cameron is definitely ready for something different. "I said to my boyfriend the other day, I can't remember the last time I played a character in jeans and a t-shirt with my own hair. I'm always in wigs and doing really high-production stuff." She cited a recent (and very well-received) run on the London stage in The Light in the Piazza as another example. "I'm in a wig, I'm in a '50s dress with like a really tight waist, and I'm singing, I'm dancing, all that!" I asked how she plans to top her high-profile work for huge studios like Disney (Descendants) and Marvel (Agents of S.H.I.E.L.D. , Marvel Rising), and she explained, "I would love to, honestly, rather than 'top myself,' I would love to have a slew of projects where I just got to do only acting, and focus on really creating a character and doing something that felt a bit more subdued and grounded in reality." Though, she reminded me, "Also obviously I have my music coming out too!"

"What do you do when you have nothing? That feeling is something pretty deep that you could fall into for ages as an actor."

Said music has already begun to drop, with two original songs already making waves. They join the Descendants songs that have already seen Cameron's name soar up the charts. When it comes to Descendants 3, she advises fans look out for "the big ballad, 'My Once Upon a Time.'" It's one of Mal's most revealing, honest songs, and Cameron explained that "it was something I could really lean into . . . at that point in the script, everything has failed. What do you do when you have nothing? That feeling is something pretty deep that you could fall into for ages as an actor."

Cameron admitted that she throws everything into a role, whether that's a live performance or on set for Descendants. I asked her how the performances differ depending on the setting. "Hairspray Live was the height of anxiety, because it's not only live so you get one chance, but they can't edit it, it's on TV for millions and millions to see, which is much bigger than an audience in one night in a live show. But then it's forever immortalised on DVD, so, you know, it's the worst of every world, but if it goes right, it's the most magic!" she explained.

"The challenge for me doing it live every night is making it new for myself," she continued. "I'm quite an emotional person, so to reach the height of the emotions of the characters that I take on, and feel good about it myself, I have to really put my all into it every night, which is quite draining. I think a lot of people learn how to kind of like 'ration' their emotion, they're like, 'OK, I know I have to do this tomorrow . . . ,' and I just am not good at that. I think I'm much more suited for film in that way, where I can just sort of focus on this one piece and then never have to do it again. But also there's nothing like the live audience." 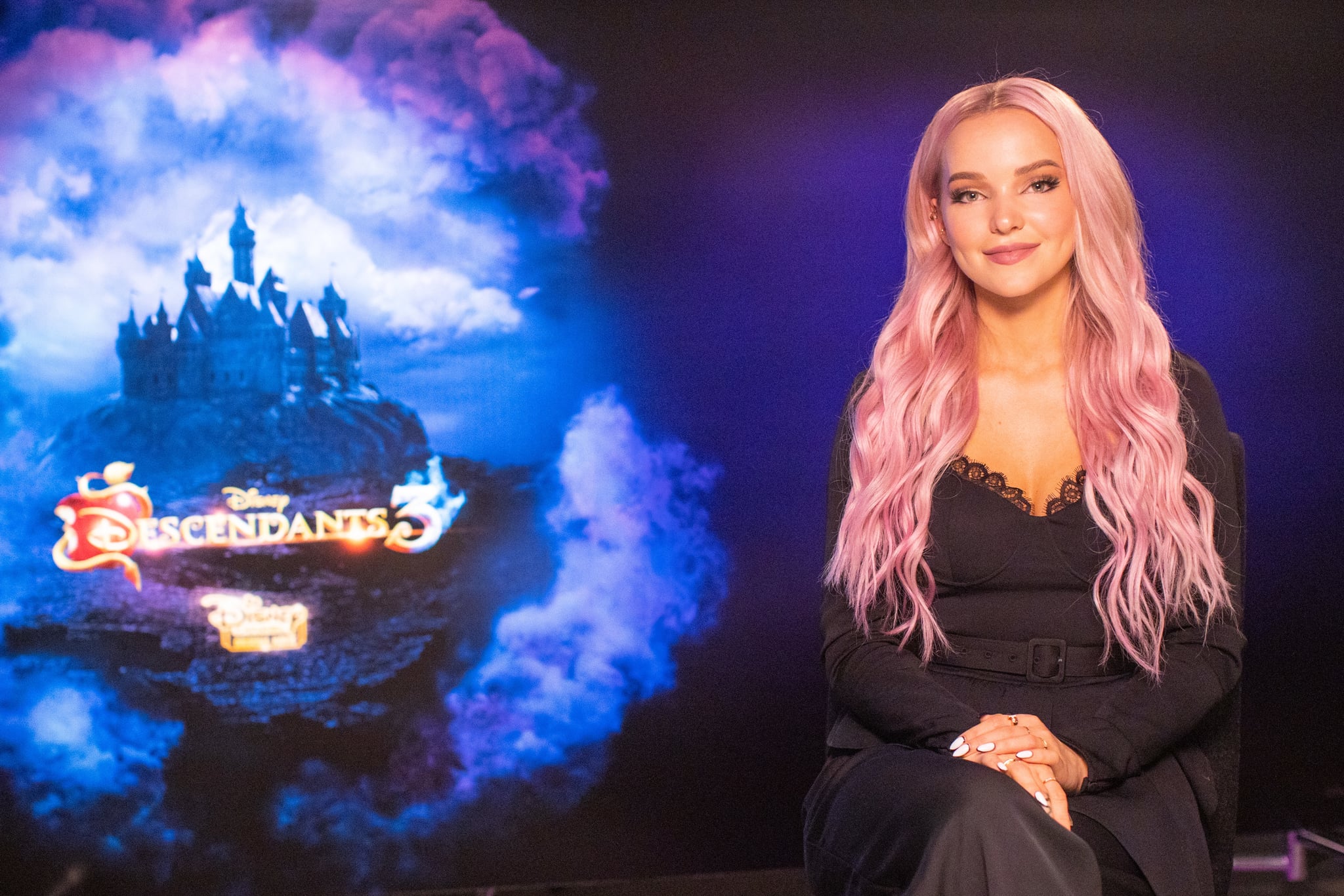 When it comes to the Descendants franchise, along with her costars, there's one person who makes the whole experience such a joy. "Kenny Ortega, I have so much faith and trust and such a strong relationship with that man. How often do you get to work with the same director three times, and especially someone who's so . . . he's a legend! Working with him on musical numbers is like pure bliss, it's like the ultimate kind of heaven."

You can witness that "heaven" for yourself when Cameron stars for the final time as Mal in Disney Channel's Descendants 3. The threequel of the hugely popular movie franchise will premiere on Disney Channel UK on Friday, Oct. 11, at 5.30 p.m.