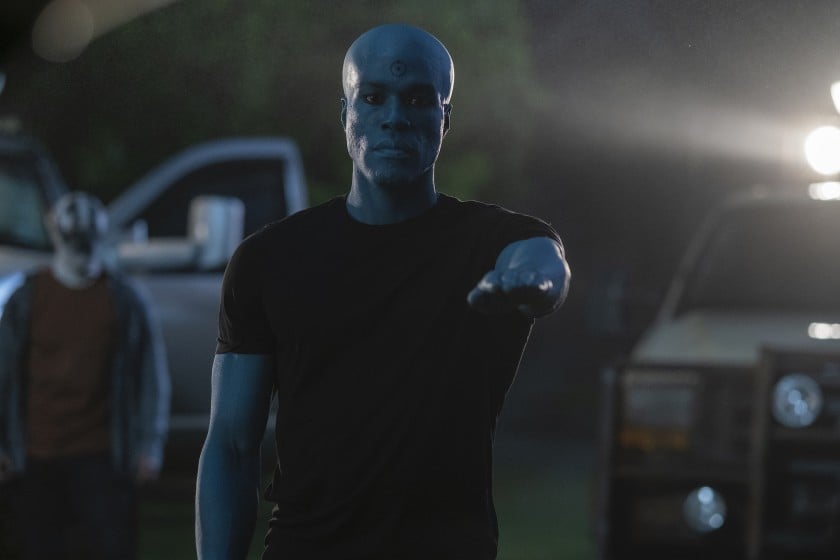 As Watchmen ramps up for its final episode, we're left with a major cliffhanger at the conclusion of episode eight, "A God Walks into Abar." Not only does the latest episode finally reveal Dr. Manhattan is Angela's husband all along, but it also sets into motion the Seventh Kalvary's plan to destroy him and transfer his powers to Senator Keene. Like Angela, we were shocked to see the blue superhero disappear into nothing after getting shot with a bizarre cannon right in front of his house. But is he truly gone?

This isn't the first time someone has tried to kill Dr. Manhattan. In fact, Adrian Veidt himself attempts to in the graphic novel. After the heroes discover his horrifying plan, Veidt lures Jon into a chamber similar to the one that created him, apparently disintegrating him into nothing. Not long after, he reappears, telling Veidt, "reconstructing myself was the first trick I learned." This is proof he can't be destroyed.

Considering Jon says the Seventh Kalvary want to teleport him, it seems safe to assume this is what happens to him at the end of the episode. For now, he's still alive. Yet he also explains to Angela their relationship will end in tragedy, meaning she can't stop the Kalvary's plans from happening, and he will eventually die.

But how could that be, when his powers make him immortal? As always, the only one capable of explaining his own fate is Manhattan himself. He tells Angela that if he wanted, he could transfer his powers to someone else by breaking down his atomic components. This implies he might be able to "disappear" into someone else, thus "dying" without ending his existence. (But continuing his legacy, a theme the show has been exploring from the start.)

Will he transfer his powers to Senator Keene? Or Angela? We'll find out next Sunday, as Watchmen ends its first but hopefully not last season.

Netflix
If You Loved Netflix's Lupin, Crack Open One of the Books That Inspired the Series
by Camila Barbeito 8 hours ago