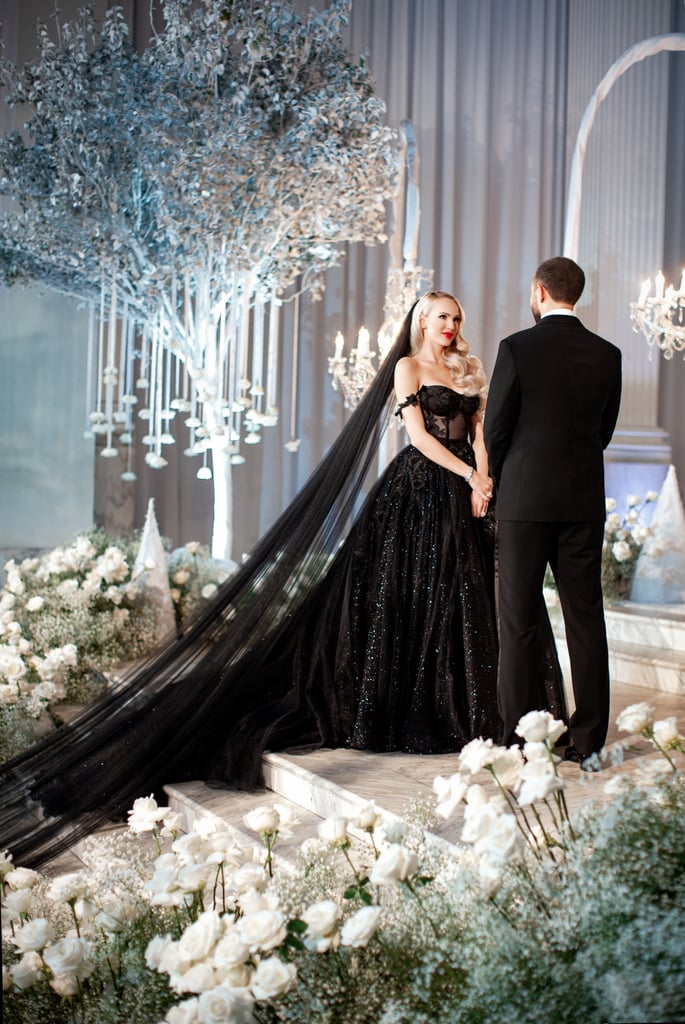 Dramatic? Check. Over the top? Check. Statement making in every way possible? Check check. There are few people who can pull off a black wedding dress, and Christine Quinn from Selling Sunset absolutely checks off the boxes. It should come as no surprise that the chic real estate agent from Netflix's hit reality series pulled out all the stops for her gothic, winter-wonderland-themed wedding, but when her and Christian's nuptials aired during the season three finale of the show, viewers were blown away by the detail and dedication to the theme. The energy was immediately palpable when she stepped out of a carriage in her bespoke black gown designed by Galia Lahav — her first dress of the evening, that is.

"Christine knew that she desired something unique and dramatic."

POPSUGAR chatted with Galia about working with Christine to design her gorgeous wedding dresses, both for the ceremony and the reception, and to say that Christine's vision was beautifully brought to life would be an understatement. "Christine knew that she desired something unique and dramatic; she was very enthusiastic about a custom dress that would be totally unique," Galia shared, adding that with Christine's guests in white and not a soft tone in sight, she was bound to stand out.

Viewers got to see Christine's first dress appointment during the show and immediately knew it would be one of a kind. Galia was able to add all the special elements usually found on a typical bridal look, including the "sparkle, embellishments, and lace" to complete the bride's look. The ballgown featured a sheer black bustier top with off-the-shoulder straps, shimmering details, and black roses embroidered from the top all the way down through the tulle bottom. Every element of the dress sparkled with detail.

"Christine described herself as a 'Gothic Barbie,' and our stylist made sure the custom appliqué on the ballgown reflected that style," Galia said. "We knew that a gothic English rose look would be a perfect fit for that lace . . . Christine decided she wanted to add one last pop of drama to her looks, so we decided on an incredible seven-meter-long black veil to make her walk down the aisle feel even more regal!" That's right, "incredible" is the perfect word to describe the spectacular veil that was over 22 feet long.

For Christine's reception dress, she upped the sexiness factor and put her own spin on the designer's Thelma gown. The supertight dress has a flattering mermaid shape with mesh cutouts down the legs, and with Christine's vision and Galia's magic touch, it was customised to perfectly capture the bride's ornate style. "We altered the original design to match Christine's vision of a sexy nighttime glam look but still with that elegant, bridal touch," Galia said. "We customised the original design by adding feathers to the skirt, dramatic points to the cups, and black Swarovski crystals to the bodice to ensure Christine's look was absolutely one of a kind." Both gowns were entirely made by hand in just two months!

Ahead, see some of the stunning photos of Christine's bespoke Galia Lahav wedding dresses, which the designer confirms she was "involved in every part of the process" of designing.