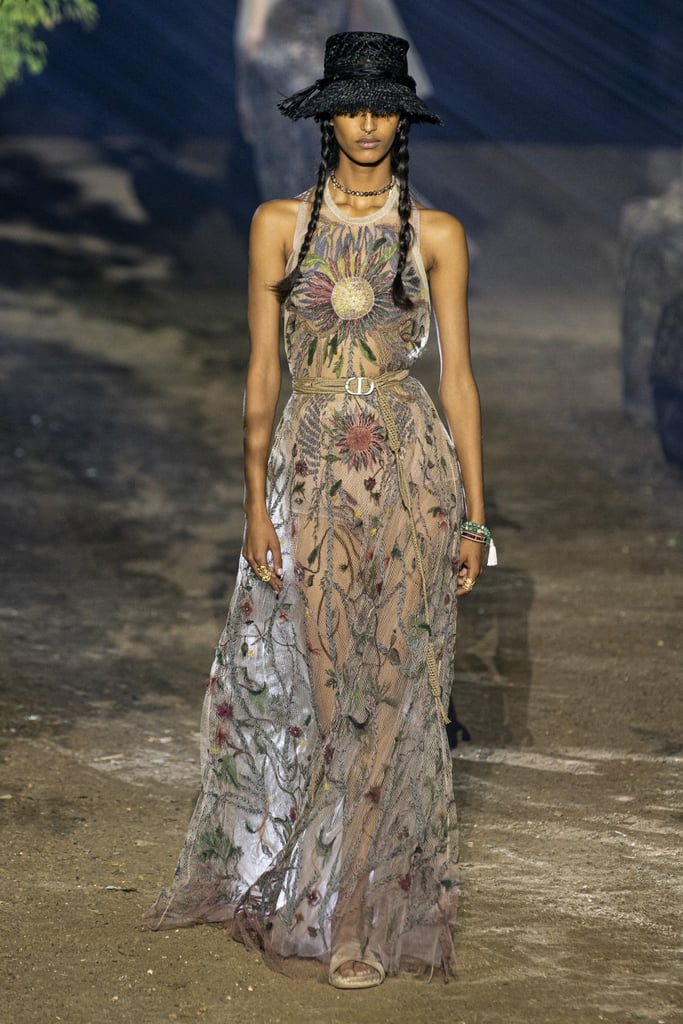 It's awfully weird to say I feel more in touch with nature just by watching Dior's 20-minute runway livestream on my computer. But if you were physically there in the audience, you would've smelled the herbaria, smelled the 164 linden trees that Maria Grazia Chiuri refers to as "the silent stars of the show." They made up the fully recyclable, plastic-free set where the Spring/Summer 2020 collection was unveiled. The space was called the "inclusive garden." All of the plants the models walked through — only to debut beautiful clothing embroidered with real meadow flowers — will be dispatched permanently as part of Dior's biodiverse planting project around Paris. The Fashion house collaborated with Atelier Coloco, a group of urban architects who helped bring Grazia Chiuri's inspiration to life.

Aside from the new Essence d'herbier Miss Dior dress — there were so many iterations of this look to take in as they floated down the runway, made from netting and sheer, gauzy fabrics — there were also the hats. On the Dior runway, I've very much come to expect hats. These straw designs came in a natural haystack shade and black. Eventually, some logo conductor caps were thrown into the mix, too. But the straw hats were made to accent the long, twine-like belts that wrapped around rompers and skirts, reminding me of a tree's roots, and the lace-up espadrille flats. Yes! Every model, even those in combat boots and slides, wore flats, grounding her in the dirt path she walked on.

This season's trend report includes lingerie as outerwear (think bras peeking out from under blazers) and there seems to be a specific power suit on every runway. But Dior's bralette looks like potpourri and Dior's unique suit comes embellished with black flower stems that swirl up the trouser leg and reach the lapels and collar of the blazer. Not so ordinary.

Finally, I can't disregard the tie-dye pieces, which break up the neutral colour palette right before the finale. There's a yellow midi skirt, a rainbow parachute dress, and a faded utility jumpsuit for street style stars — unless they're more attracted to the voluminous feathered pullovers, which are statement items in and of themselves and can be styled simply with biker shorts and braids. Dior says, "each tree gives oxygen, greenery, beauty." Well, all of these new clothes reflect upon that idea, offering the same three things — oxygen, greenery, beauty — to the showgoers, but most importantly, the wearer.