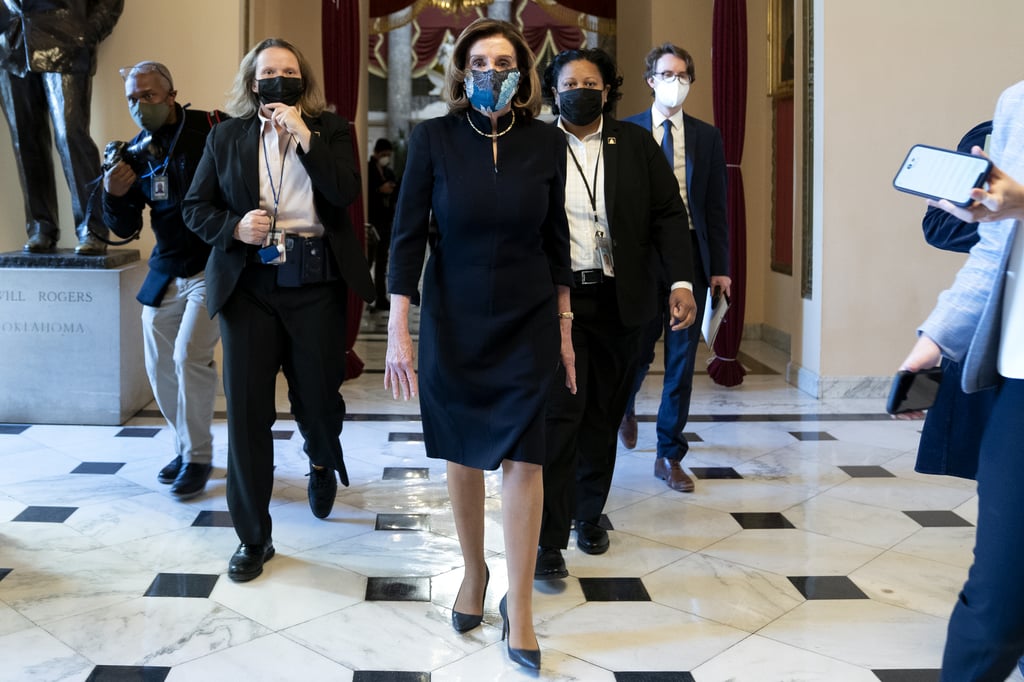 Who Recognises Nancy Pelosi's Dress at Trump's Impeachment Vote From the First Time Around?

On Jan. 13, dressed in what some have called her best "funeral outfit," House Speaker Nancy Pelosi opened the debate for the impeachment of President Donald Trump for inciting the insurrection on the US Capitol. After seeing photos of Pelosi emerge on social media, users were quick to point out that her three-quarter-sleeved suit dress looked strikingly familiar. Like most of the US, the black, high-collared number has been through this situation before — when Pelosi wore the dress to Trump's first impeachment. Sombre, sleek, and powerful, the dress makes more than just a fashion statement. It highlights the severity of the debate outcome and serves as an important reminder that we've been here before.

Some speculated that Pelosi could have been wearing the not-so-subtle callback to Trump's first impeachment — which took place on Dec. 18, 2019 — as a good-luck charm. For you, a good-luck charm might be a pair of red underwear, the necklace you've had since seventh grade, or that bracelet with the little ladybug charm. For Pelosi, the power suit is a symbol of resilience and a reminder that the actions of those in power do have consequences.

Just hours after Pelosi referred to Trump as "a clear and present danger to the nation we all love," the House reached enough votes to impeach the president. Following a tally of all the remaining votes, Trump will become the first president in US history to be impeached twice. Take a closer look at Pelosi's powerful outfit ahead.

Related:
12 Women Politicians and Activists Who Have Proudly Made Fashion Part of the Conversation
Previous Next Start Slideshow
Celebrity StyleNancy PelosiWomen In PoliticsUS PoliticsPoliticsDonald TrumpDresses
Around The Web