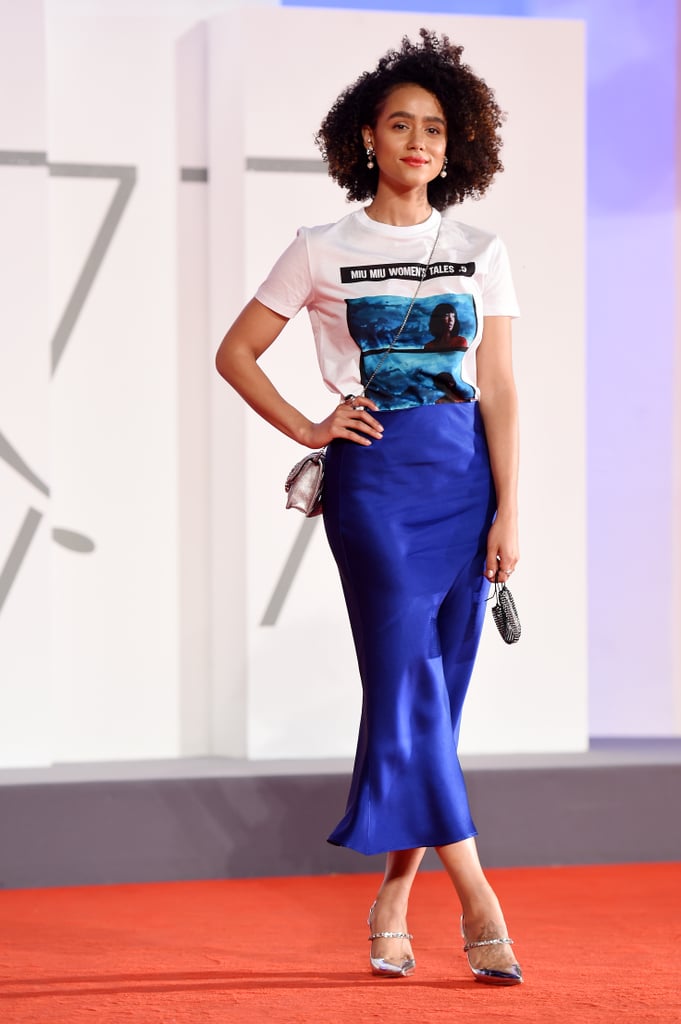 Nathalie Emmanuel walked the red carpet for the premiere of Italian film Revenge Room by Diego Botta at the 77th Venice Film Festival on Monday, 7 Sept. The Game of Thrones actor wore a head-to-toe casual but elegant outfit designed by Miu Miu, which continues her ambassadorship for the brand's "Miu Miu Women's Tales" campaign.

Emmanuel's look for Revenge Room was extremely wearable, featuring a relaxed white t-shirt printed with a scene from the "Miu Miu Women's Tales" film series and a cobalt blue midi-length silk-satin skirt. The t-shirt showed a scene from the "Miu Miu Women's Tales" short film The Door, which is both directed by an award-winning Black female director, Ava DuVernay, and features an all-female cast of acclaimed Black actors including Gabrielle Union, Adepero Oduye, Emayatzy Corinealdi, and Alfre Woodard. While the sentiment behind "Miu Miu Women's Tales" is exceptional, we couldn't keep our eyes off the styling of Emmanuel's look, which featured a Miu Miu silver quilted crossbody bag, the brand's signature crystal-strap mules, and a luxe black mesh facemask adorned with silver crystals.

Ahead, a closer look at Nathalie Emmanuel's casual and elegant look for Venice Film Festival.