I am not one of those people who can eat whatever I want and never gain weight. I've also been lucky to have never seriously struggled with my weight. However, like most adult women, I have to practice portion control, eat relatively healthily, and exercise if I want to maintain my weight.

But I absolutely refuse to watch what I eat on holiday. 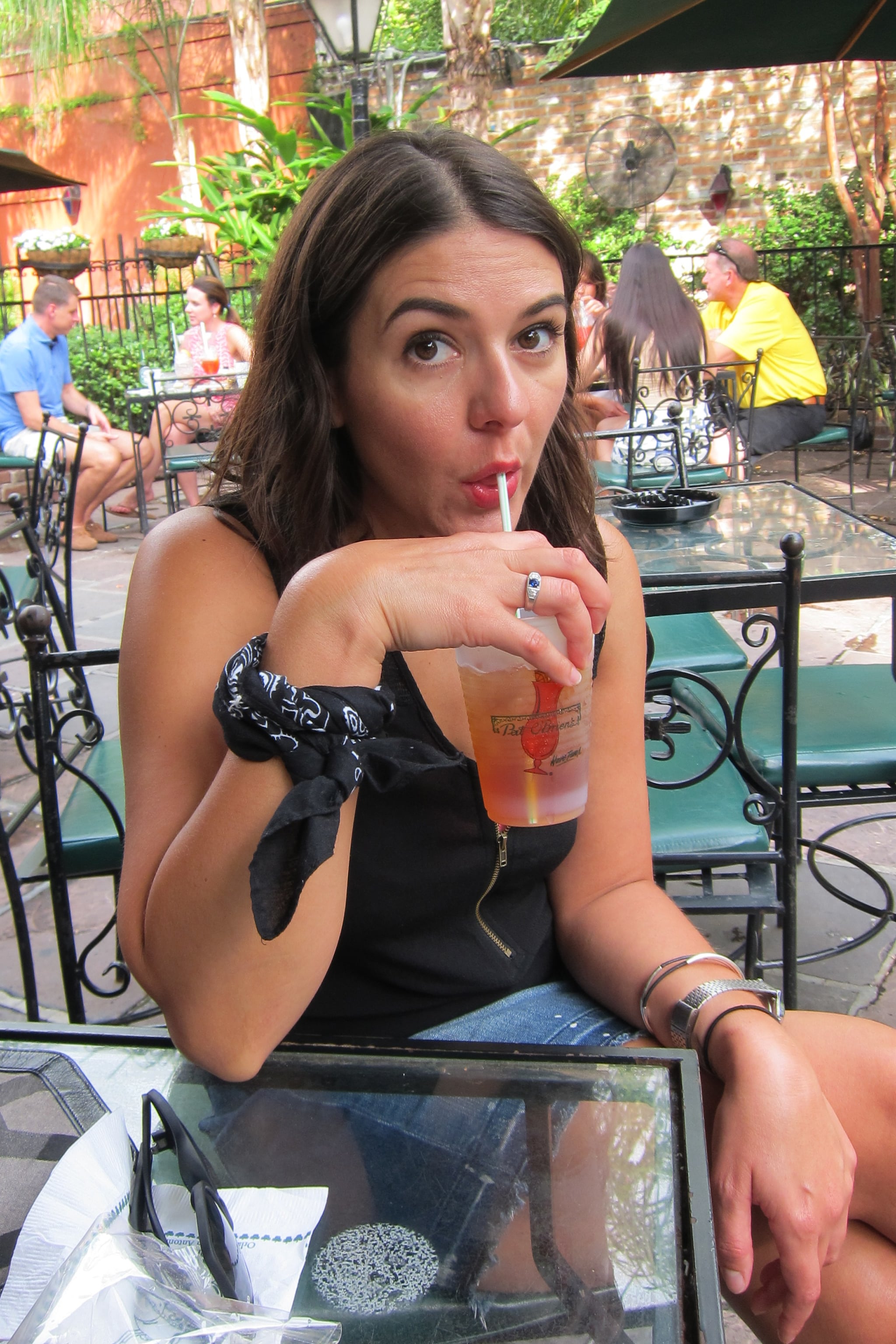 The author enjoying a sugary cocktail in New Orleans without guilt.

I adopted this belief system about two years ago: After years of back and forth, I realised that what I ate on holiday had a negligible impact on my weight and a huge impact on my happiness. My chief indulgences in life are pasta, sandwiches, cocktails, and cocktails. I've never met a cheese plate I didn't like. In general, indulging too much in those foods makes me gain weight, while cutting them out can help me lose weight. But what I eventually came to realise is that a holiday without carbs and cocktails isn't really a holiday for me.

As most people over the age of 30 know all too well, the older you get, the more your weight fluctuates depending on how much you eat, drink, and exercise. Like many women, I got my first wakeup call at university when I gained the "freshman 15" — more like the freshman 25 in my case. I began to notice a direct correlation between the stuff I ate and how I looked and felt. In the years that followed, I had a several more milestones, when I realised my metabolism was again catching up to me and my less-healthy habits.

I went through a phase in my early 30s when I not only started watching what I ate during the week, but also when I took holidays. As I'd gotten older, it became harder and harder to lose weight when I gained it, and I feared that if I gained 10 pounds on holiday, it would be nearly impossible to get rid of. But after a few years of this, I realised that attempting to watch what I ate on holiday was a misguided and flawed endeavour — at least for me. Obviously everyone should take the healthy eating approach that works for them, but here's why I shifted my mindset.

1. I enjoyed my holidays less.

Because eating and drinking are two of my favourite pleasures in life, limiting what I was consuming on vacations impacted how much fun I had. I spent so much time stressing about what I was eating or not eating that it just bummed me out. I'd order starters that seemed healthy but tasted boring. I'd really want a piña colada, but my brain would tell me I should order a vodka soda. I'd order a vodka soda, but couldn't stop thinking about the fact that I really wanted a piña colada.

2. I did a terrible job anyway.

Most of the time, "watching" what I ate on vacation didn't mean I actually ate healthier. Usually, I just ate what I wanted — except I also spent way too much time obsessing about it. Since it's often hard to figure out what the "healthier" options are on restaurant menus, I'd agonise about what to order before just going with my first choice. When faced with the great piña colada debate, I'd usually order one and then feel guilty about it. Since I have terrible willpower, thinking about something just makes me want it more and more until I finally give in, so thinking about it too much is counterproductive.

3. I realised that listening to my body was just as effective.

Rather than worrying about what I was going to eat before I ate it, I learned that if I listened to my body, I didn't need to rely on willpower. Guess who rarely wants a second piña colada? My body. Guess who craves a salad after days of eating cheese? I do. Guess who goes easier on the cocktails the day after overdoing it? Me. Sometimes.

As I've gotten older, I've gotten much better at portion control and knowing when I'm full and should stop eating. Since I watch what I eat in normal life, I'm used to balancing healthy food with indulgence, and my body tends to rebel if I just cram it full of rubbish.

4. I am a pretty active holidayer.

With the exception of beach vacations — when I mostly sit on the beach and occasionally throw around a Frisbee — I get a lot of exercise when I'm travelling. I prefer travelling on foot when exploring new cities, which means I often end up walking several miles every day. Sometimes I rent bikes or go on hikes. I find myself working up an appetite then eating when I'm hungry more than I do in my normal life. During my recent experience at the Bonnaroo Music Festival, I walked 27 miles in three days. That's basically a marathon, which makes me more willing to let myself indulge in a corn dog or two.

5. I eat more mindfully on holiday.

Though I try to avoid unhealthy snacking, I do succumb to temptation, particularly at work. I'll scarf down a bag of potato chips in front of my computer or a free cupcake without thinking much of it. On vacation, I rarely snack unless I'm actually hungry, and when I'm eating, I'm usually savouring my food mindfully. (Unless I'm in Amsterdam, then all bets are off.)

6. I realised I was fighting a nonexistent battle.

After one particularly active but indulgent holiday, I returned home and realised I hadn't gained any weight at all. From then on, I started giving myself permission to eat what I wanted without guilt, and I haven't looked back. I find I enjoy my holidays so much more without holding myself to rules.

I've also come to realise that there are plenty of weeks when I'm not on holiday that I don't eat very well or exercise enough, like when I'm particularly busy at work or under a lot of stress. My weight fluctuates for all kinds of reasons: changing medications, PMS, switching up my workouts, or spending too many weekends in a row getting drunk and eating pizza. I have come to accept it as a part of life and not get too bent out of shape when I gain a few pounds. As long as I know I'm making healthy choices in the long run and not letting myself get too out of control, everything evens out. I'm about to leave for a two-week holiday, and who knows? I might gain a few pounds, or I might not. Either way I'm not worried about it.