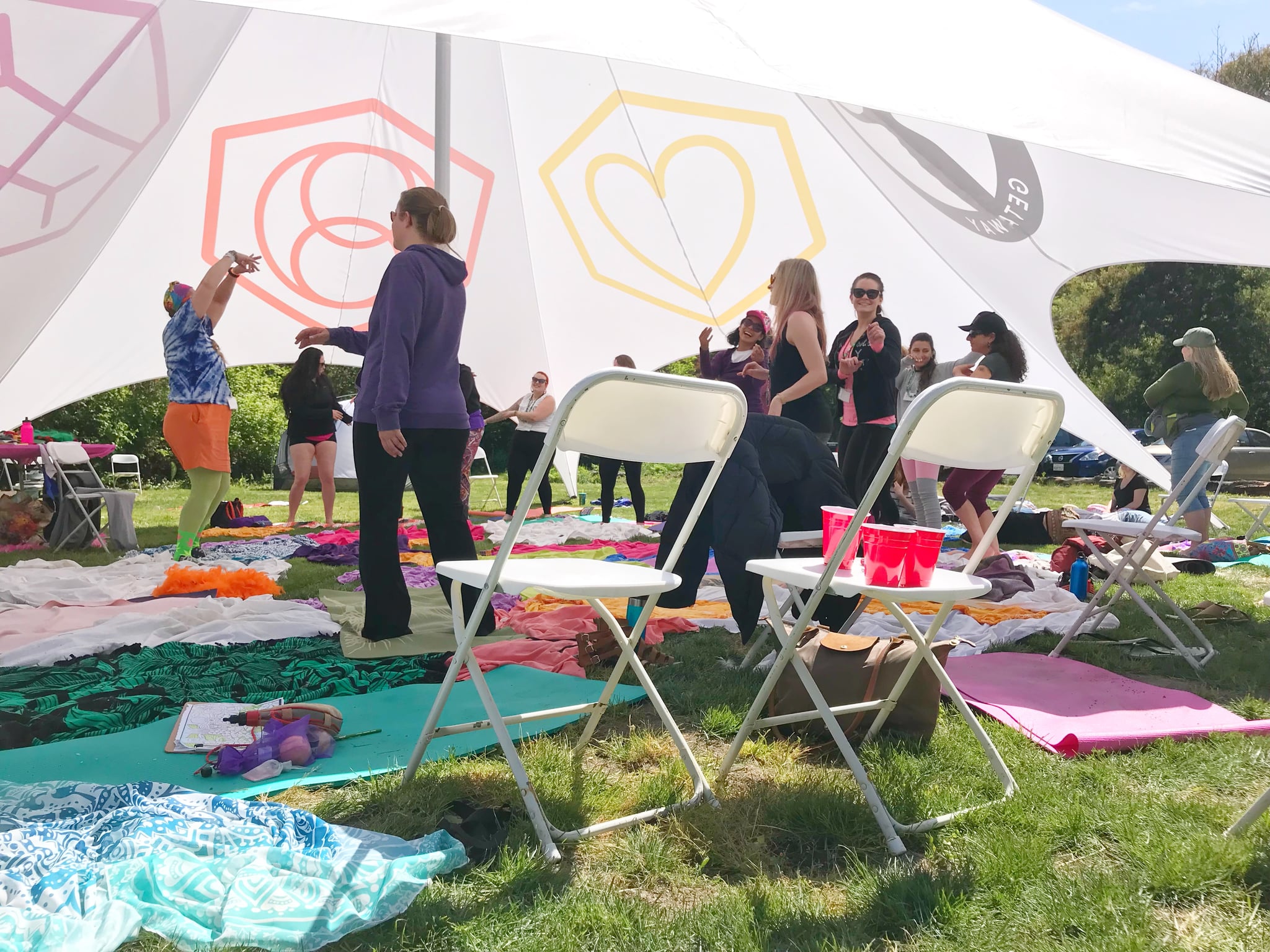 Being high among strangers can be awkward enough, but being high and doing laughter yoga with strangers takes discomfort to a whole new level. As a recent guest of Ganja Goddess Getaway, a female-only cannabis retreat, I was introduced to the unconventional practice of laughter yoga for the very first time and it was an interesting experience to say the least. We were led by certified laughter yoga instructor Claire Powell, who guided us through a series of exercises that called for forceful laughing. Instead of poses like downward dog, think exercises that are more similar to what you may expect in an acting class like saying "thank you" to the person next to you while laughing.

Laughter yoga was first started in the early '90s by Dr. Madan Kataria, who became interested in the connection between laughter and mental and physical health. Convinced that laughter was a necessary tool for dealing with the stresses of modern living, he sought out ways to prescribe laughter to patients. Upon discovering various scientific studies that confirmed the health benefits of laughter, Dr. Kataria launched the first Laughter Club in his neighbourhood in Mumbai, India. Through trial and error, he found that genuine laughter and forced laughter are actually one and the same to our body.

Once laughter yoga was born, Dr. Kataria drew inspiration from his days as an amateur theatre actor to develop exercises and techniques that were similar to role play. With the emphasis on childlike playfulness, he continued to find ways to stimulate laughter and deepen its impact with deep breathing.

Turns out, laughter is really the best medicine. When you force yourself to laugh, you'll eventually reach the point of genuine laughter because of how silly you feel. "Laughing produces the same positive effects on the body whether it's reactionary or intentional," she told POPSUGAR. "Even if you do not feel like laughing at first, laughter is contagious and when done in a group usually becomes more organic and starts to flow more freely and mirthfully."

Here are the scientifically proven benefits of laughter, straight from Claire:

"Laughter boosts the immune system by decreasing stress hormones and increasing immune cells and infection-fighting antibodies, thus improving your resistance to disease. Laughter provides a physical and emotional release. Also, positive thoughts and feelings, such as those released with laughter, have the potential to release neuropeptides (chemical signals in the brain), which help fight illness."

"Laughter provides a full-scale workout for your muscles and releases a rush of stress-busting endorphins. Since our bodies cannot distinguish between real and fake laughter, anything that makes you giggle will have a positive impact. A good, hearty laugh relieves physical tension and stress, leaving your body relaxed."

"Laughing can release endorphins, the body's natural pain killers, which can help ease chronic pain and make you feel good all over. Laughing, in fact, has been shown to increase the body's natural killer cells and T-cells, which are types of cells that attack foreign material in our bodies. Laughter also keeps away negative emotions such as anxiety and depression, which tend to weaken the immune system."

One of the benefits of laughter is that it can help you burn a few calories and tone your abs. When you are laughing, the muscles in your stomach expand and contract, similar to when you intentionally exercise your abs. Meanwhile, the muscles you are not using to laugh are getting an opportunity to relax. It also works out your shoulders and exercises the diaphragm and heart. Dr. William Fry, a researcher at Stanford University called laughter 'internal jogging.'"

"Laughter improves the function of blood vessels and increases the flow of blood through your arteries, which can help lower blood pressure and protect you against a heart attack and other cardiovascular problems. Laughter is a great cardio workout, especially for those who are incapable of doing other physical activity due to injury or illness."

About 10 minutes into our laughter yoga class, I found myself surprisingly tired. Forcing myself to laugh required more energy than I had — I was especially in need of a nap after smoking weed all morning. It felt like a mini ab workout since my abs were continuously engaged throughout the exercise. On top of feeling sleepy, being in an elevated state of mind made me self-conscious during the exercises as they called for walking around and finding someone new to laugh with. We all looked and sounded as ridiculous as you might imagine, but the good thing was that we were all in it together.

According to Claire, there is a right and wrong way to doing laughter yoga. In order to reap the benefits of laughter stated above, you'll need to laugh continuously for at least 10 to 15 minutes in a laughter yoga class. "The laughter must also be loud and deep, like a belly laugh coming straight from your diaphragm," she said. "It is important to maintain a sense of childlike playfulness and openness when practicing this form of yoga."

Laughter yoga is not about laughing at others or at jokes — through a combination of deep breathing, deep laughing, and physical movements, laughter yoga seeks to create harmony between the mind and body. Though I probably won't be signing up for my next laughter yoga class anytime soon, it was a fun experience and an unexpectedly good ab workout.

Image Source: POPSUGAR Photography / Nicole Yi
Any cannabis products referenced above are not intended to diagnose, treat, cure, or prevent any disease. The writer is not a medical doctor, and their experience is based on personal use, the results of which may not be typical or intended. The legality of cannabis products varies by state, and readers are encouraged to check their local laws before purchasing and using cannabis products. Nothing in this article should be construed as advice regarding the legal status of cannabis products. Any views expressed in this article by a third-party sponsor are those of such sponsor, and do not necessarily represent the views of POPSUGAR.
WellnessStress ReliefYogaWorkoutsMarijuana
Around The Web

Yoga
Does Your Lower Back Ache From Working From Home For a Year? Do This 30-Minute Yoga Flow
by Jenny Sugar 4 days ago

Shoppable
After Years of YouTube Workouts, Alo Moves Is the Fitness App That Finally Stole My Heart
by Maggie Ryan 5 days ago