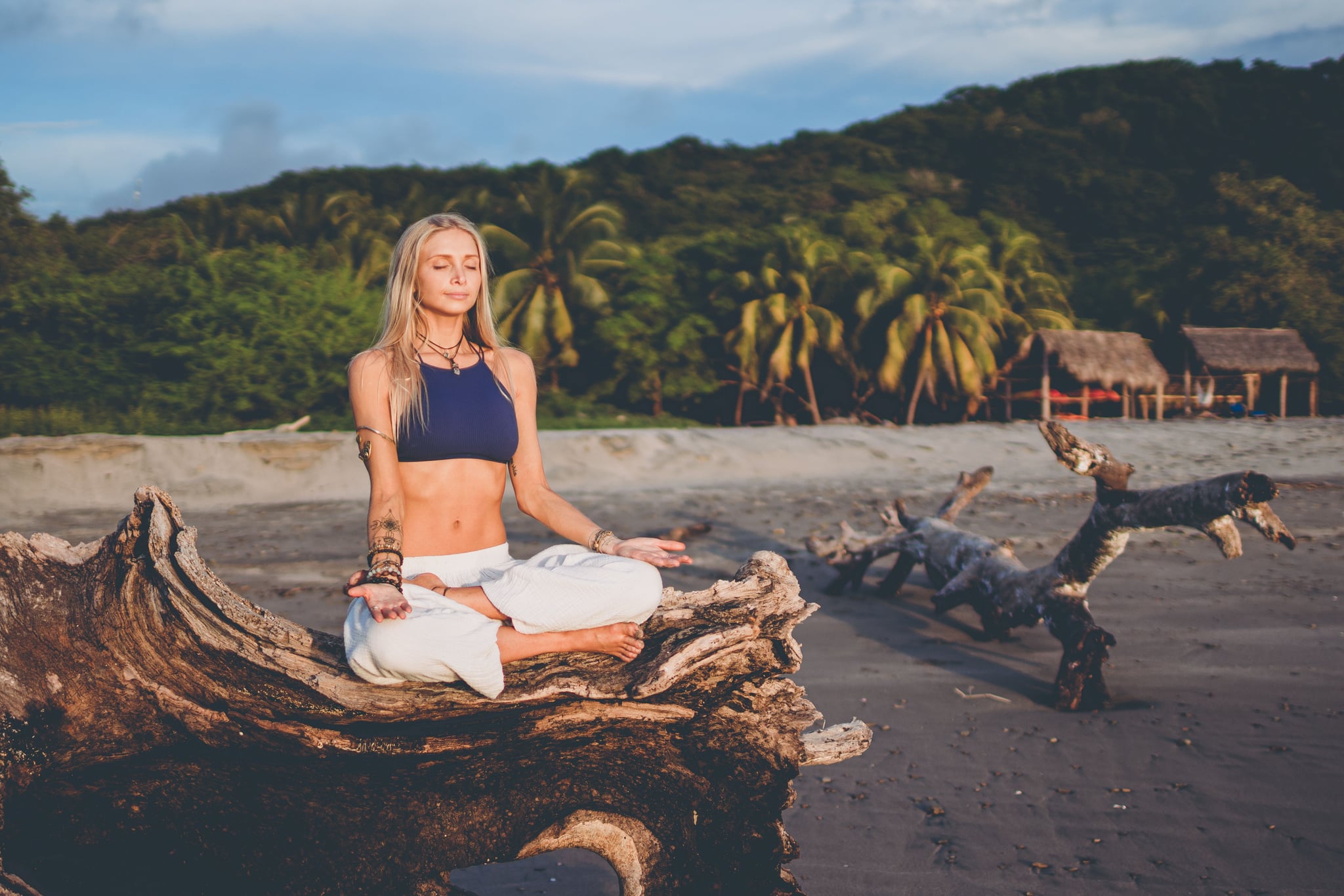 There are a few practices that Juliana Spicoluk, cocreator of the Boho Beautiful wellness and lifestyle brand, does for stress relief. "Finding time for yourself, disconnecting from the external world, and reconnecting with what's inside yourself is one of the best ways to help cope with any anxiety or stress," she told POPSUGAR. Three main things come to mind: yoga, meditation, and breathing techniques.

Pranayama, or the act of controlling the breath, Spicoluk said, is so important because getting more oxygen calms the nervous system. Spicoluk, who is certified in yoga and pilates and has studied meditation — and whose classes you can find on YouTube and Patreon — noted that her go-to breathing techniques are alternate nostril breathing and what she calls "three-part breath," which she walks us through ahead. These techniques are useful to do if you're feeling intimidated by meditation and don't want to sit in silence, she said.

Spicoluk explained that, with alternate nostril breathing, you block one nostril, inhale into the open one, hold both nostrils, and then exhale through the opposite nostril. Here's more thorough instructions.

Alternate nostril breathing, Spicoluk said, helps balance the body and brain. Normally, you inhale for four counts, hold for about eight, and exhale for eight, but for people just starting out, Spicoluk recommends going by what you feel comfortable doing as long as you're alternating nostrils. You can see her explain these steps at the end of the below video (around 18:10):

For this breathing technique, you guide your breath up from the belly, into the ribs, into the chest, and then reverse it down from the chest, ribs, then belly. From personal experience, it helps to close your eyes and visualize the air travelling up from the belly to the ribs and chest, so that the inhale extends upward properly and the reverse happens for the exhale. Spicoluk suggests doing this 10 times or so. In terms of the counts, she said it's "just breathing in as much as you can because the bigger you can expand the belly and welcome more oxygen into the body, the better."

If these breathing techniques aren't for you, you can try doing a body scan, which Spicoluk said is a tool often used in the beginning of meditation or at the end of a yoga practice, perhaps in Savasana when you're lying down on your back. Basically, all you're doing is bringing awareness to different areas of the body.

Spicoluk explained that you can start from the top of your head and move all the way down to your toes, or vice versa. It's a great way to release stress that you're holding in certain body parts, she said. For instance, you might begin by bringing awareness to your forehead and allowing yourself to scan slowly downward. Wherever you feel you're holding tension, relax and, with awareness, let go of that tension. "It's a beautiful technique to really find a deep relaxation," she said, adding that if you're feeling restless, it's especially useful at night to help you ease up and drift off into sleep.