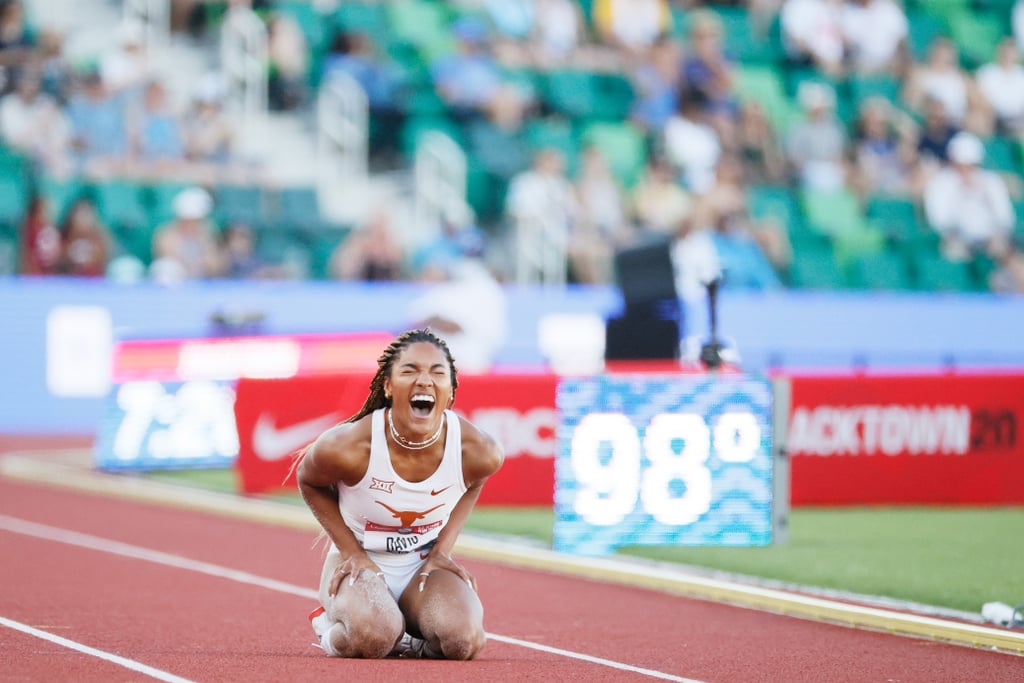 A year from now, University of Texas long jumper Tara Davis will be walking across the stage to get her diploma — but first, she's going to Tokyo to compete in the Summer Olympics, alongside her boyfriend, two-time Paralympic medalist Hunter Woodhall. Couple goals, am I right?

Davis soared through the Olympic Trials this past weekend, coming in second to her idol, Olympic gold medalist Brittney Reese. "I've literally been watching [Reese] since I was a youngin', since I started track when I was 4 years old," Davis said in an interview after qualifying for Tokyo. She added that she has been starstruck throughout the Trials: "I've only seen [Reese] on TV, but now I'm jumping with her . . . That's insane!" Davis's second place jump of 23 feet, 1.25 inches was 3.5 inches behind Reese's first place finish.

The first-time Olympian has been turning heads at the collegiate level for a while now. Davis is the NCAA indoor and outdoor long jump champion and collegiate indoor and outdoor record holder. She is the only woman in UT's history to clear 22 feet in the long jump (Davis has jumped more than 23 feet three times this year alone), and currently holds the record for the school's top 13 outdoor long jumps. Now, she's the first Longhorn in her sport to earn a spot on Team USA.

"I can't put into words how I'm feeling right now, there just are so many emotions," Davis told Texas Sport. "I say it all the time, I didn't think I was going to be here. I was going through so much I just didn't ever think I was going to be at the Olympic Trials. But here I am, and I was so grateful for the opportunity, and I took advantage of it. Once I got into the finals, I was not going out, I was not going miss out on making the team. So here I am, and I'm an Olympian! I couldn't be happier!"

Woodhall and Davis's parents were in attendance over the weekend, and their reunion after learning that Davis had qualified for Tokyo is too sweet for words. See their emotional celebration ahead.