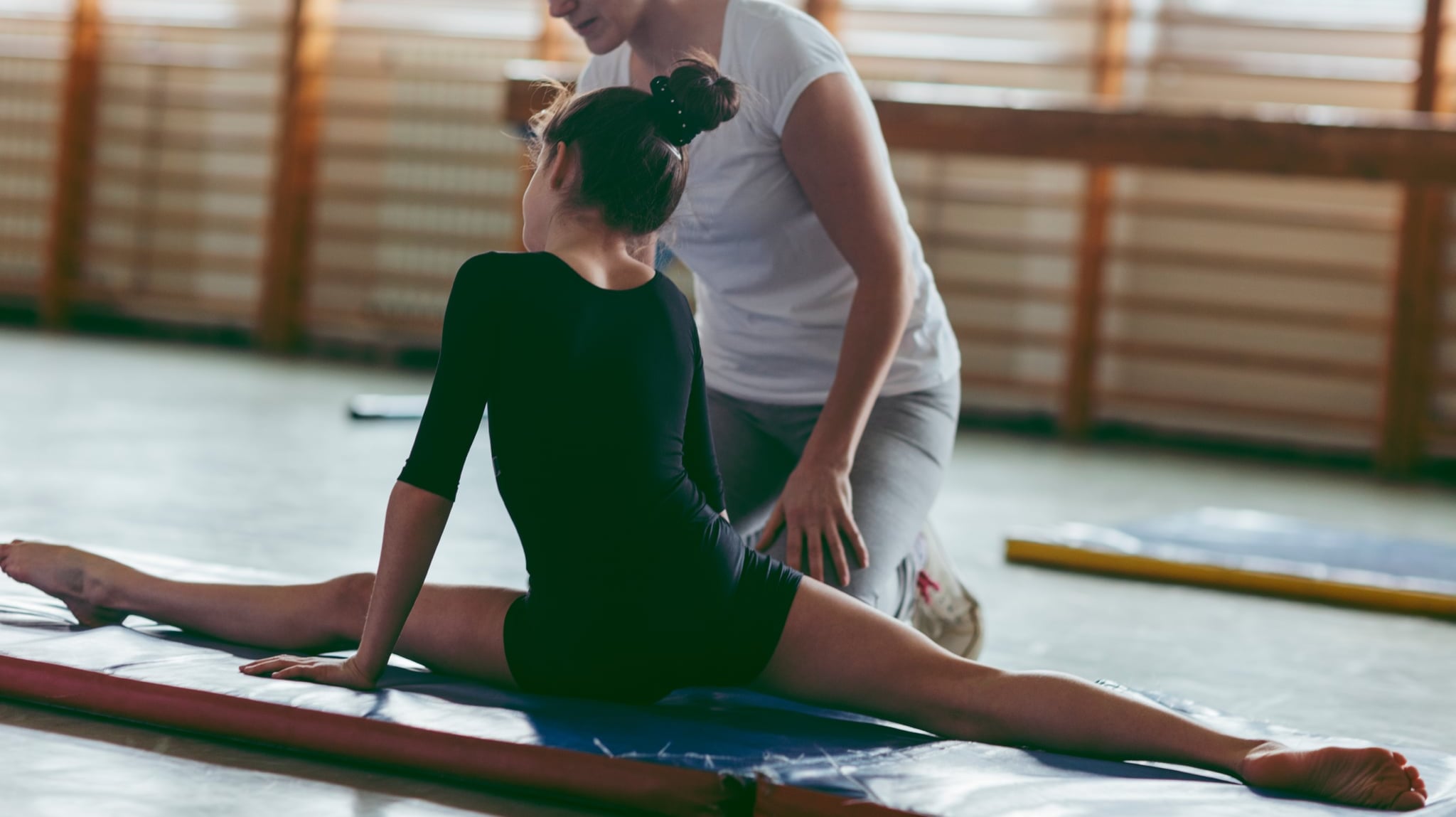 "Fat girls don't flip fast," the gymnastics coach I had throughout elementary and early middle school told us as she explained how to get enough height in our tumbling passes. It's called "setting" — before you connect a back handspring, front handspring, whip back, etc. into a flip, you have to reach your arms up by your ears so the flip goes high up in the air. If your arms are far apart, or as my coach warned, "fat," you won't get as much height. I never quite seemed to think about "fat girls" or my body the same after that.

I'll always remember the slight, sometimes overt, comments my coach, a former gymnast herself, made about our bodies at a time when puberty was top of mind. We were learning about it in the classroom, and some of us were already facing its wrath. At one practice, she jokingly (but not so jokingly) compared the size of all of our calf and glute muscles. Then, she told a few of the girls that if they weren't careful, they'd grow up to have big butts.

There were other instances where my coach specifically targeted one girl on our team whom she constantly pointed out as too "jiggly." She'd pinch the girl's stomach and make snide remarks about needing to speak with the girl's mother to find out what food was available at home. My coach would scold the girl for her "thick" thighs and demand she run extra rounds of stairs at the end of practice. The most distressing part? She'd always say these things through a smile, sometimes mitigating the severity of her words with a laugh.

Body-shaming by coaches and other authority figures — and the resulting unhealthy relationship with body image — is a common theme when you talk to gymnasts on the elite level, too. Five-time Olympic medalist Simone Biles, UCLA superstar Katelyn Ohashi, and former elite gymnast Mattie Larson have all spoken about body-shaming they endured in the sport. Biles mentions in her book, Courage to Soar, that she remembers falling during her floor routine at the 2013 US Secret Classic and overhearing another coach say, "You know why she crashed? Because she's too fat." Ohashi was shamed for her curves prior to her collegiate career and was called a "bird that couldn't fly." And Larson, who developed an eating disorder in her teens, explained to Vice News in a 2018 documentary that at the now-closed-down Karolyi Ranch in Texas, former national team coordinator Martha Karolyi would go around during training-camp meals and praise gymnasts for having small amounts of food on their plates.

The things you're told as a young gymnast, good or bad, stay with you. (One study published in the Journal of Applied Sport Psychology in 2006 concluded, based on surveys, that retired gymnasts "reported more eating disorders and negative views of their experiences than did the current gymnasts.") Even after switching gyms a number of times and no longer working with my original coach, I still felt her comments stick.

My body can still be beautiful and athletic without meeting standards set by a sport fixated on attaining perfection.

After over a decade in the sport, my life without gymnastics began freshman year of college. When I was a senior, I wrote a personal essay recalling how, when I first went away to school, I used to stare down warily at my hips and cup them in my hands as if to hold them in when they started to blossom. I also became near-obsessed with working out. I'd go to the campus gym for two hours per night, six days a week. Why? Well, the thought of losing the abs you could see through my leotard — this "perfect" gymnast's body — was terrifying. My roommate even shared her concerns when I'd come back to the dorms at 11 p.m. fresh off a long sweat session.

Though I never developed an eating disorder while competing in gymnastics or thereafter, I did show signs of disordered eating. There was a period of time when I punished myself for indulging in sweets by doing extra crunches on my bedroom floor. I was hyperaware of what my body looked like. These were all things I had to work through once I quit gymnastics. It took a few years, but I learned that rest days are important and so is enjoying the food you eat, exercise is not a punishment, and my body can still be beautiful and athletic without meeting standards set by a sport fixated on attaining perfection.

I heard similar sentiments when I spoke with Betsy McNally, a former gymnastics coach who also competed in the sport for over a decade through level 10 (level 10, for reference, is right below the elite level). Now she's a personal trainer and nutritionist who teaches gymnastics boot camps, called Betsy Bootcamps, across the country to instruct families, coaches, and gymnasts about the importance of proper nutrition for athletes and how to foster positive body image and a safe environment. She doesn't want things to escalate for them like it did for her.

At 14, McNally was told that she was "too heavy" to be good at gymnastics and that her weight was holding her back. She describes in her memoir, Binges & Balance Beams, that her coaches started displaying her and her teammates' weights on a chart at practice. She fell into a downward spiral of "not eating" and sprinkling fibre powders on her meals, so she'd stay fuller for longer. No one ever taught her which foods would give her energy and what would help her recover from workouts, she said. No one was there to talk about how to eat to promote a healthy lifestyle; instead, it was all about restriction. And the worst part, as it is for many gymnasts, were the lingering effects.

After gymnastics, McNally turned to bodybuilding competitions and modelling, becoming "obsessed" with her physique and looking fit. She struggled with the "vicious cycle" of restriction and binging in the bodybuilding world, and those comments from her gymnastics coach remained. Though McNally can't diagnose eating disorders or refer athletes at her boot camps to eating-disorder specialists — that's out of her scope of practice — she can educate them on the importance of nutrition that she's learned not only through her professional work but through her own experiences, too.

It's in the nature of gymnastics (and in the rules, for that matter) to strive for perfection, but I realise now that, as much as I love and appreciate those years as a gymnast, this fight for the elusive "perfect" led me to grip onto what I deemed to be my own imperfections. I can't sit here and pretend that the sport didn't shape me as a person in positive ways. I owe a lot to it — my courage, my attention to detail, my splits — but the body-shaming is not just exclusive to the elite level of gymnastics; it's on all levels, and it has longterm effects.

And it's not just in gymnastics. Take former professional runner Mary Cain's November 2019 op-ed video published on the New York Times website. In it, she details the ruthless and unhealthy atmosphere on the now-shut-down Nike Oregon Project team cultivated by her coaches and spearheaded by Alberto Salazar (note: Salazar was banned from the sport for four years due to a doping scandal). Cain was conditioned to shed pounds at a dangerous rate because it would make her "faster," and she, too, was weighed in front of her peers.

Cain is an advocate for more women coaches, and I agree that we need them. But my experience shows that women are not immune to falling prey to, and perpetuating, these negative cultural messages. We all need to work together to change the fundamental ways in which we educate and support young women in sports.

As McNally told me, "I really like to think that I'm part of a movement where we're changing, shifting completely, the whole result of the sport and focusing more on being positive and educating girls." But the real people struggling, she noted, are "people like me and you." We, as McNally explained, experience the residual effects later in life where it "manifests in eating disorders and people not loving themselves just because of a stupid comment."

It's OK to love the sport and, at the same time, acknowledge that there are deep-seated issues in how girls' bodies are judged.

McNally and I spent some time talking about how the focus on appearance and weight — and lack of education on healthy habits and nutrition — caused us to have missed opportunities in our gymnastics careers. "I really would have been good at the sport, but nobody ever taught me balance," she said. Still, she was able to use the struggles she faced for a purpose greater than her own. "I took a bad thing and I made it a good thing," she said, "and that's what makes us stronger and better people."

Hearing McNally say this made me feel seen. Self-love can be hard to come by. Gymnastics did teach me to be proud of my strength and to believe in that strength. My former coach's body-shaming can't take away that feeling of empowerment, but it wasn't until after those transitional years in college that I could abandon the microscopic lens I used to view my body through; that I could detach from this idea of what a "perfect" body should be.

For gymnasts or former gymnasts going through similar experiences, I have a message: It's OK to love the sport and, at the same time, acknowledge that there are deep-seated issues in how girls' bodies are judged. It's OK to thank the sport for what it's given you and recognise what it took from you. It's OK to grow into the person you now are — and will become — knowing that perfect isn't who you are. And that's exactly how it's supposed to be.

Related:
I Did Gymnastics For the First Time in 5 Years and Remembered How It Felt to Conquer My Fears
Image Source: Getty / vgajic
Eating DisordersBody ShamingGymnasticsHealthAthletesHealthy LivingBody ImageSportsPersonal EssayMental Health