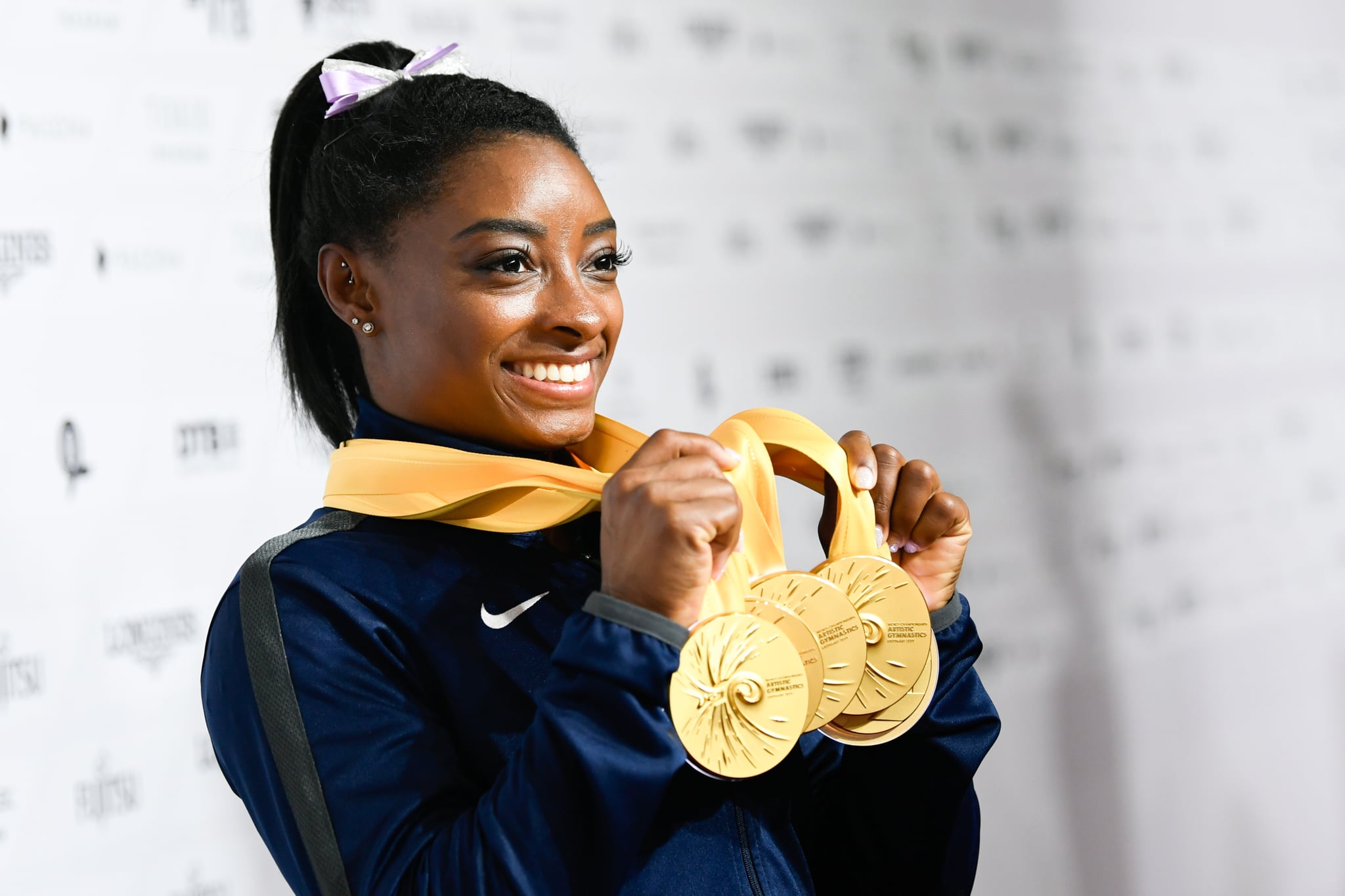 Simone Biles in competition looks fearless, strong, and confident, whether she's flying off the vault, debuting her jaw-dropping Biles dismount on the beam, or completing intricate tumbling passes on the floor. It's hard to believe she's capable of feeling such human emotions as nerves, pressure, or self-doubt. But of course, she is human, and she does battle mental challenges both in and out of the gym, as she revealed during a Facebook livestream hosted by MasterClass on June 24.

"I have wanted to give up," Biles said in the stream. "I have wanted to quit." The struggle is part of the process, she added, saying that you'll face challenges no matter what path you're on in life. How does she break out of that mindset? "I look at the reasons why I'm doing it, why I started. I look at the goals I have ahead, and they kind of remind me to not give up."

Goals are huge for Biles. She talked about setting both short-term and long-term goals, and how they keep her focussed and driven. One of the reasons the pandemic has been tough for her is that the Olympics, Biles's "end goal," is postponed until 2021.

"I'm on the international stage a lot," Biles continued. "It's not easy to do what we do . . . sometimes we do cry in the gym. We do have hard times. We don't hit all of our routines." Focusing on her end goal, despite all the bumps in the road, keeps her driven to succeed.

Biles journals for mental health too. "It's a safe spot," Biles explained. "You put your thoughts onto paper, however you're feeling or your goals or whatever you want to do."

Related:
10 Moments in Olympic Women's Gymnastics That Stunned the World

Biles also detailed the routine that gets her in the zone before big events, which includes combatting nerves and pressure. A week or two before a competition, she said, she goes to therapy "to just kind of decompress." It's helpful to be in a safe space, where she can say whatever she wants and deal with any negative emotions before a meet. "It kind of just calms me."

Day-of, she'll practice in the morning and eat a good lunch, typically salad and chicken, plus a banana before leaving. Biles said she takes a nap and listens to music, too. "If I don't listen to music, I'll just get in my head," she said, explaining that she has a tendency to overthink her routines. "I'm a gymnast that kind of needs to be distracted, in a way. Because if I start to overthink, then you can see that in my gymnastics . . . I psyche myself out." She said she uses music to calm herself down before the competition and in the arena.

Even then, Biles said, she still gets nervous before every competition, especially when it comes to specific events. "It usually happens more on floor," she said. "I'm so nervous on floor, I'm so nervous on vault, because I know what I'm capable of . . . Everybody expects me to be a great floor worker, so I get really nervous because I don't want to let anybody down."

She said she tries not to look at social media before competing, "because before I even step into the arena, [people] expect me to come out as the winner and that is a lot of pressure." Biles's own expectations for herself are the highest, she added, so it doesn't help to have more piled on. "I have a great team around me that makes everything better," she said. "It does get hard at the end of the day, because I don't want to let anybody down or disappoint anybody . . . I want to make people happy with my gymnastics and bring them joy."

Watch the full livestream below to check out what Biles is up to now (back training and doing more never-before-seen beam dismounts, of course.)

Simone Biles joined us for #MasterClassLive, where the four-time Olympic gold medalist gymnast answered questions and shared insight into performing under pressure. Watch it free now.