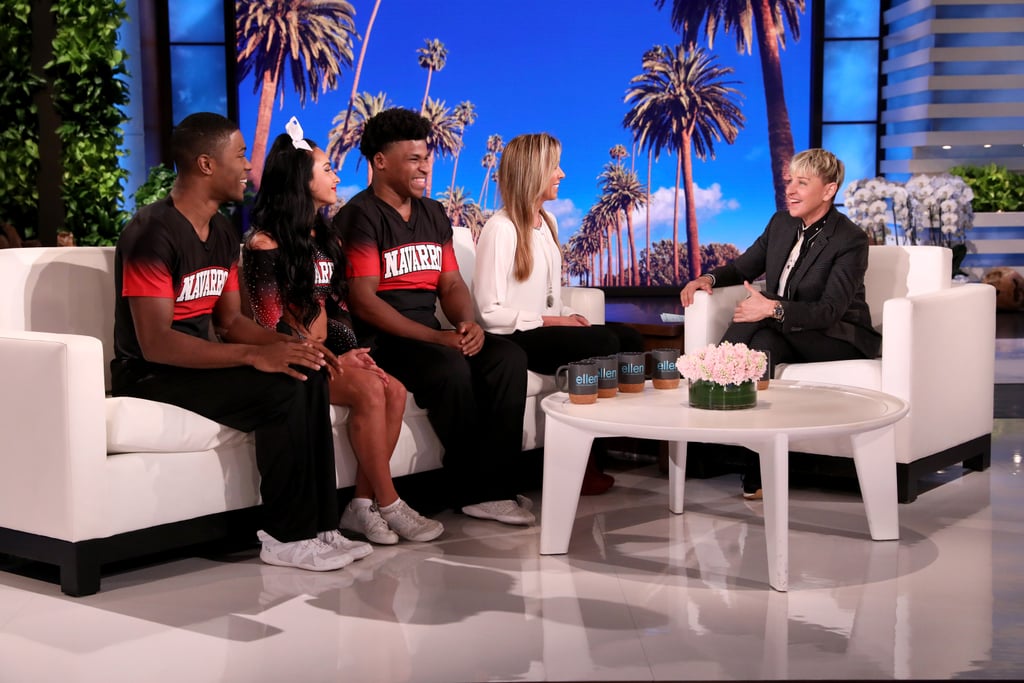 From cheerlebrities to celebrities, members of the Navarro College Cheer Team at the centre of Netflix's enthralling six-part docuseries, Cheer, recently appeared on The Ellen DeGeneres Show to perform one of their famous routines. La'Darius Marshall, Gabi Butler, Jerry Harris, and coach Monica Aldama also sat with the talk-show host to offer updates on their lives since the show's immediate success.

The appearance wouldn't have been complete without a little mat talk from breakout star Jerry, who described it beautifully when he said, "Mat talk is basically giving encouragement to anybody that's on the floor with you, and letting them know that you have somebody that's looking out for you and wants to be there for you." Following his contagiously enthusiastic mat talk, Ellen replied, "Whenever I'm on stage, I should bring you on the side."

Gabi, meanwhile, addressed the concern that her parents push her too hard and appeared to be too involved. "It was a really big eye-opener for all of us," Gabi said. "My parents were like, 'Wow. Maybe we do need to let her be more independent, and let her make her own decisions for herself.'" She added, "I'm very grateful for the show."

"I felt like I was finally free. I could fly."

La'Darius echoed a similar sentiment when he said his relationship with his family has also improved since Cheer premiered. In particular, his mother gained a deeper understanding of the ostracism he endured because he is gay. "When we first started the show, I was a little nervous, a little scared, because nobody really wants to talk about the bad things that have happened in their life," La'Darius said. "After the show, I felt so much better because I got away from all my chains. I felt like I was being held down, and I felt like I was finally free. I could fly."

"These are like my kids. They come to me with their problems. I hear the stories, I see the tears," the demanding coach told Ellen. Speaking to the college's small-town home in Corsicana, TX, Monica added, "It doesn't matter that it's a small town because if we're not practicing, we're in school or cheering at a game. So, they have plenty to do." And plenty, they sure do. Watch the team's interview and performance ahead.

Related:
Want to Keep Up With the Stars of Netflix's Cheer on Social Media? Here's a Handy List
Previous Next Start Slideshow
NetflixCheerleadingCheerThe Ellen DeGeneres ShowTV