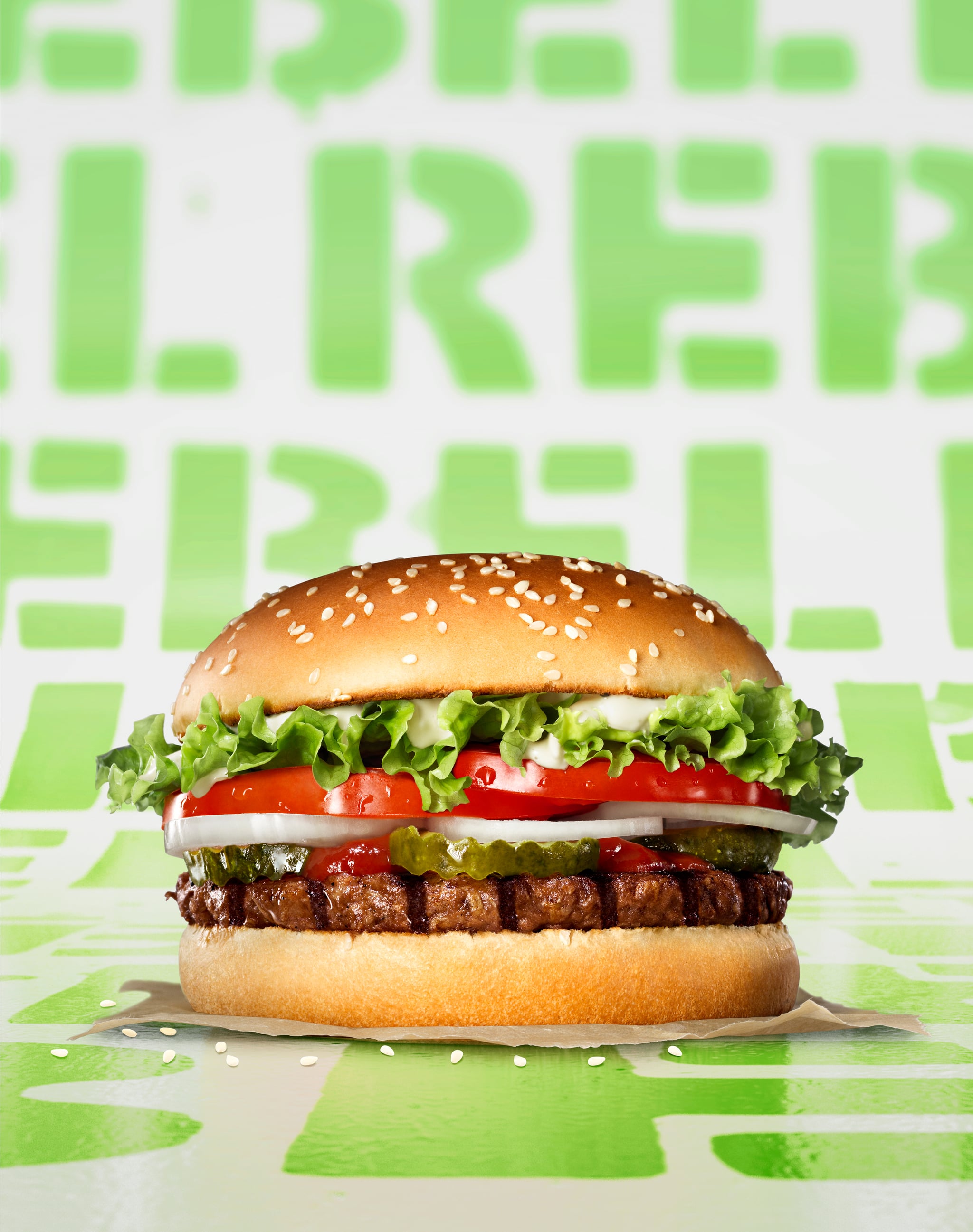 Now that we're officially in the roaring '20s again, Veganuary is here. Yes, it's the time of year when people across the country ditch animal-based products in favour of plant-based alternatives. The challenge was launched by the organisation of the same name to inspire "people to try vegan for January and throughout the rest of the year."

Luckily, for people attempting the 31-day feat this year, some of the biggest eateries in the UK have launched vegan treats. Tantalisingly tasty examples include Pret's "Very Berry Croissant" and Gregg's "Vegan Steak Bake". Put simply, that means that challengers can go vegan without missing out on their favourite foods. However, if you're following a strict vegan diet, there's one supposedly plant-based snack that you might want to give a miss.

Burger King's new Rebel Whopper, a soy-based version of the classic Whopper burger developed in partnership with The Vegetarian Butcher, is not 100-percent suitable for vegans or vegetarians. Um, pardon me? While the patty itself contains no animal-based products (phew), the gossip mill has been turning: there have been whispers the patty is cooked on the same grill as meat patties, and people have taken to Twitter to vent their frustrations:

@BurgerKing I've just seen this ad and I couldn't help but wonder WHY ON EARTH WOULD YOU MAKE A PLANT-BASED BURGER THAT IS UNSUITABLE FOR VEGETARIANS? #rebelwhopper pic.twitter.com/YlhVrNO69N

I must say, Burger King's new Rebel Whopper is really nice, but I wish they didn't cook it on the same grill so more people could enjoy it.. they really missed the point lmao 😅 pic.twitter.com/vp7Q6JHTXe

To get to the bottom of it, POPSUGAR reached out to the fast-food chain to find out whether the rumours were true. "Whilst the Rebel Whopper has a plant-based patty and does not contain meat, it is cooked in the same broiler as beef to create Burger King's signature flame-grilled flavour," a representative of the Burger King franchise responded via email.

Since the Rebel Whopper is cooked in meaty juices — or, at least, on the same surface that meat was cooked — you could argue that it is derived "partly from animals" . . . or not. It's a gray area.

So, does that mean that the Rebel Whopper isn't vegan or even vegetarian? Well, that really depends on your specific definition of the terms. Opinions of what it means to follow these lifestyles may differ from person to person. However, if we go straight to the horse's mouth, the Vegan Society defines veganism as: "A philosophy and way of living which seeks to exclude — as far as is possible and practicable — all forms of exploitation of, and cruelty to, animals for food… In dietary terms it denotes the practice of dispensing with all products derived wholly or partly from animals."

Since the Rebel Whopper is cooked in meaty juices — or, at least, on the same surface that meat was cooked — you could argue that it is derived "partly from animals" . . . or not. It's a gray area. So, while some people who are attempting the Veganuary challenge may not mind the slightly carnivorous coating, stricter vegans may want to avoid the patty altogether.

Despite the culinary controversy, many will argue that the fact that leading brands like Burger King are now offering meat-free alternatives is a step in the right direction, albeit a small one. "The Rebel Whopper — minus the mayo — is produced without harming any sentient being, it's a BIG WIN for animals," PETA UK wrote on Twitter.

The Rebel Whopper – minus the mayo – is produced without harming any sentient being, it's a BIG WIN for animals. pic.twitter.com/FmZPTCnzKv

What's more, the officials from the Veganuary organisation also deem the plant-based patty fit for the challenge. "For all of the important issues that Veganuary — and most vegans — are trying to address through their food choices it makes absolutely no difference whether the plant-based patty is cooked separately or on the same grill as the meat," said Toni Vernelli, international head of communications and marketing at Veganuary, in a press release.

"What does make a big difference to animals and the planet is when non-vegans choose a plant-based menu option, enjoy it, and then order it again. And that's exactly who Burger King's plant-based Whopper is aimed at, flexitarians who want to reduce their meat consumption for health or environmental reasons, or are considering going vegan."