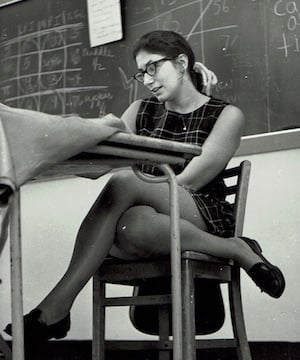 POPSUGAR: This conversation around Ask for Jane, and especially your work, feels especially relevant today with news of Alabama's abortion ban, the most restrictive in the nation, just passing this week. Did you think we'd still be fighting this battle more than five decades or so after your work with the Jane Collective?

Judith Arcana (pictured above around the time of the Jane Collective): We actually never stopped fighting this battle — for a couple of reasons. First of all, if you read the text of the Roe decision, you find that what the court was ruling was power for doctors. The power ultimately rests in the hands of doctors, not women. And second of all, just three years after the Roe decision — which definitely was a good thing, despite what I just said — the Hyde amendment was passed, meaning young women and girls, people with not much money, could no longer get abortion health care.

So, by 1976, it was very clear that the Roe decision didn't really make the kinds of changes that everyone wanted. And within five or six more years, it was also clear that the antiabortion movement and Republican Party were so ferociously using abortion as a major-league issue and power-getter that everybody was in trouble. And it's been bad ever since. It's getting worse, and worse, and worse. Easily. As of 10 years ago, 90 percent of the counties in this country have no abortion care available. So even where it is "legal," you can't get it unless you've got time and money and child care if you're a mother, and on, and on, and on.