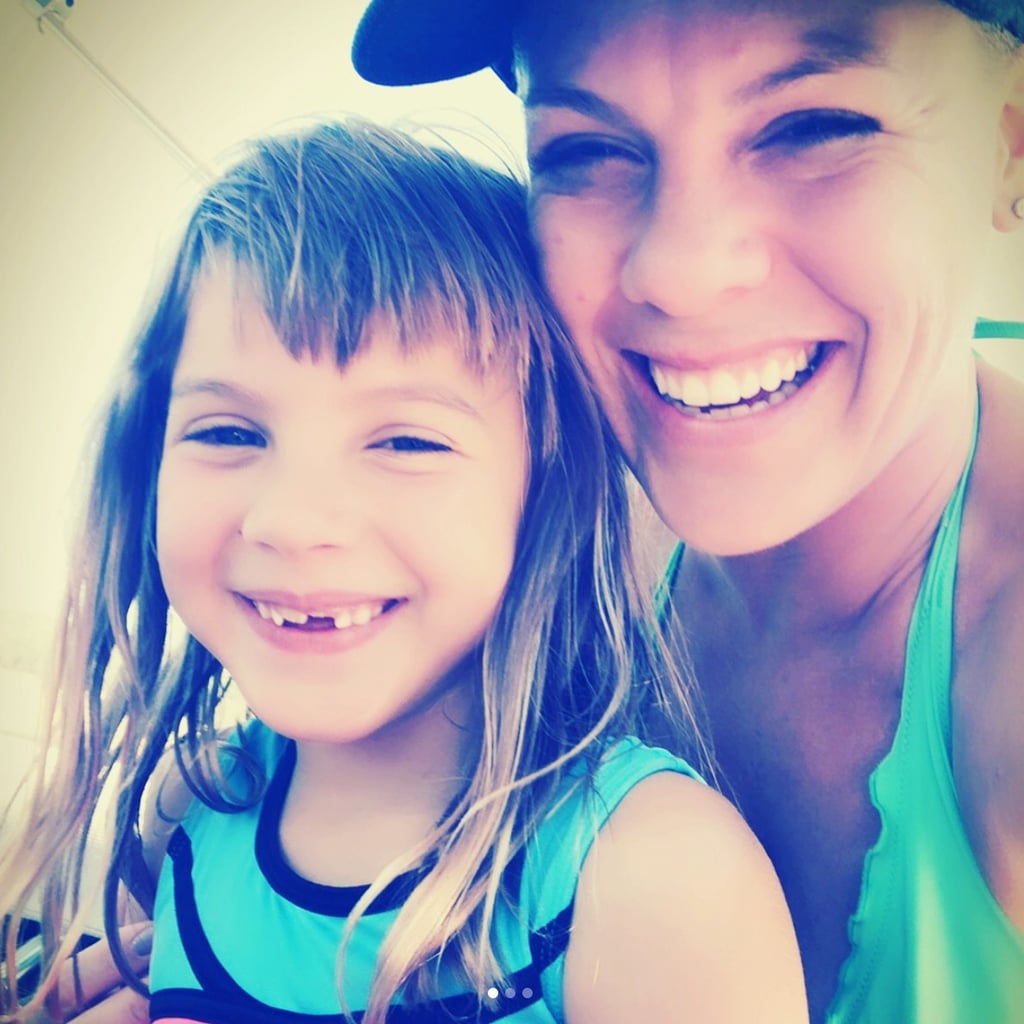 Pink on Canceling 1 of Her Shows to Recover From an Illness: "I Don't Need to Clear This Up"

Since March, Pink has been travelling the world on her Beautiful Trauma Tour with her kids, 7-year-old Willow and 1-year-old Jameson, in tow. As any working mom knows, balancing work and family can be difficult, and being a global superstar doesn't excuse Pink from typical parenting struggles, like knowing if she's making the right decisions for her kids at any given time. On Aug. 1, the singer announced she'd be canceling one of her Australia shows — the first to be cancelled of the entire tour — in order to recuperate after an illness her and the kids all came down with. Unfortunately, paparazzi took the time to snap a few photos of her on the beach with her kids, and the scenario was spun into something it isn't: Pink looking like she was taking a day off for no other reason than to hit the beach frivolously.

"I don't need to clear this up, but out of respect for my fans I will attempt it," she wrote in an Instagram post featuring a screen grab of a photo of her and Willow on the beach with a headline underneath that read, "Pink's Sydney Concert Cancelled as She Chills in Byron Bay." "I scheduled this tour meticulously, trying to do what was best for my children, while also putting on the best and most physically demanding and beautiful show of my life. This break in Byron has been scheduled since 2017, as a way to get outside the hotel and the Winter and have some time with my children. I've already been sick twice (kids as well) on this Australian tour, but the first time we got sick, I was able to push through. This time, what these parasite paparazzi don't show you, is two doctor visits in Byron on two consecutive days, antibiotics, steroids, Vick's, nose spray, throat spray, more steroids, NyQuil, a screaming baby in the middle of the night, every night, while mama gives him warm baths and tells her daughter everything is fine."

Related:
Pink Opens Up About Touring With Her Kids: "It's the Hardest Thing I've Ever Done"

The mama continues, noting that she would never intentionally disrespect her fans who spend money to see her perform by canceling a show for no reason.

I have never phoned in a single tour, I have an impeccable record for not canceling. I mother with everything I have while handling all the rest. The snark in this is unbelievable and makes me long for a nicer world. I'm doing the absolute best I can, and you can believe it or not. What they don't show you in this picture is me drinking water and lying down while my friends try to entertain my 7-year-old who is asking me why these creepy men are surrounding us and pacing back and forth and taking pictures of her every move. I will see everyone tomorrow whether I'm better or not, and the postponed show will be rescheduled. As I said, I'm sorry to the real fans who this situation has affected. Onwards and upwards.

Many of Pink's followers left positive comments on the photo, including Justin Timberlake, who is also touring with his family right now. The singer's supportive comment reads: "The REALEST. I'm sorry, sis, but I gotta jump in too. As an artist who has had the fortune of sharing the twice on tour with this incomparable BADASS . . . I'm here to tell you that you won't find a harder working, more authentically talented, and more thankful for her place on that stage and her fans than this woman . . . As a parent on tour as well, and an artist who LOVES their fans just as much and wants to give them an unprecedented experience AND is currently battling an injury, a sinus infection, and trying to be the dad I want to be, too? I say HATS OFF to you, my friend. I don't know how moms/artists like you exist."

Check out all of the cutest pictures so far of Pink and her kids on tour.

Related:
Cardi B Isn't Going on Tour So She Can Spend Time With Her Baby, and Damn, I Respect That
Previous Next Start Slideshow
P!nkMusic ToursWillow HartParentingJustin Timberlake
Around The Web