Delaney's 2-year-old son Henry lost that battle in January, but the essay was actually written nearly a year earlier — as part of a book proposal that he decided to shelve once Henry's disease became terminal.

The essay, published on Medium, beautifully mixes laugh-out-loud humour, effortlessly relatable anecdotes, and gut-wrenching grief. In one paragraph, for instance, he explained why he opted not to take his son on the red London double-decker buses he loved so much:

"I don't want to have to jostle with other curious passengers when I have to turn on his suction machine to suck out the saliva and mucus that collects in his tracheotomy tube," Delaney wrote. "He would love to go on the bus though . . . I'll take him on a bus soon and if it makes anyone uncomfortable they can suck my d**k. Metaphorically; my family needs me too much for me to get sent to prison for trying to force a stranger to suck my dick on a bus."

"I would try not to cry in front of his older brothers and fail and they'd ask why, and I would say it was because I was scared."

He then offered readers some background on how he and his wife Leah came to first discover their precious boy — they have two older sons and another baby on the way — was ill when Henry began vomiting at his older brother's fifth birthday party.

"I'd been feeding him blueberries, so there were maybe fifteen or twenty recognisable blueberries in there," he wrote. "Did I feed him too many? Had I done something wrong?"

Despite countless doctor's visits, tests, and follow-ups, they weren't able to stop his constant vomiting spells or figure out what was causing them.

"His vomit became the most precious substance in the world to me and I would often start crying whenever he threw up," he wrote. "I would try not to cry in front of his older brothers and fail and they'd ask why, and I would say it was because I was scared."

Eventually, a new doctor ordered an MRI, which revealed that Henry had cancer — more specifically, an ependymoma tumor in his brain, inconveniently wrapped around vital cranial nerves. In removing it, nerves were damaged to the point that he developed Bell's palsy, had a lazy left eye, and became deaf in his left ear. He also had a tracheotomy tube that prevented him from ever speaking again. 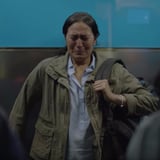 "I haven't heard him make a peep for over a year," he wrote. "My wife recently walked in on me crying and listening to recordings of him babbling, from before his diagnosis and surgery . . . him just talking to himself, in fluent baby. Fucking music, oh my God I want to hear him again."

He then wrote about a horrible day in which he'd had to hold his child down on a hospital bed while a doctor and nurse had to fix his broken tracheotomy tube ("It was awful, and Henry was terrified, begging me to pick him up and take him away. But I didn't.").

That's where Delaney's original essay abruptly ended before a few final paragraphs explaining why he set aside this would-be book for parents going through similar struggles.

"I could just call to mind the image of one of my sons, or the smell of their heads, or the feel of one of their little feet in my hand and I'd be happy."

"I stopped writing when we saw the new, bad MRI," he wrote. "My wife and his brothers and I just wanted to be with him around the clock and make sure his final months were happy. And they were."

Nonetheless, he didn't want his message to go unread by those who might benefit from it, the parents who were "always so tired and sad, like ghosts, walking the halls of the hospitals."

For now, he said that his focus will be on his family as they grieve Henry and hold on to the memories as long as they can, or for an eternity if it came to that:

"I could just call to mind the image of one of my sons, or the smell of their heads, or the feel of one of their little feet in my hand and I'd be happy," he wrote. "Give me a Polaroid of one of them to hold on to and I could do two eternities."

Meghan Markle
Meghan Markle and Prince Harry Are Excited to Welcome a Baby Girl This Summer: "It's Amazing"
by Karenna Meredith 1 day ago