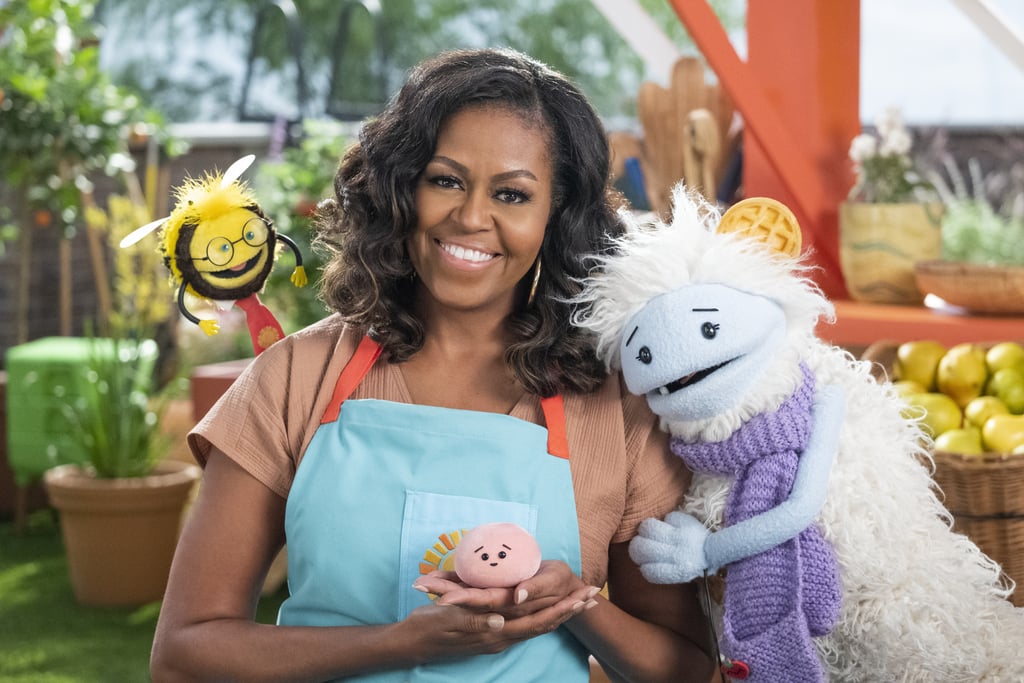 Michelle Obama is getting her own Netflix show this March featuring two very adorable muppet friends, Waffles and Mochi. In the show — which is aimed at kids, though the former first lady says adults will love it, too — Michelle, Waffles, and Mochi go on international adventures that are centreed around cooking, global ingredients, and cultural experiences that revolve around food.

"This is something I've been working on for a while now, and I'm so excited to finally be able to tell you all about it," Michelle wrote on Instagram. "Allow me to introduce two new friends of mine: Their names are Waffles and Mochi. And on March 16, we'll be launching a new children's show on @Netflix called Waffles + Mochi. It's all about good food: discovering it, cooking it, and of course, eating it. These two will take us on adventures all around the world to explore new ingredients and try out new recipes. Kids will love it, but I know that adults will also get plenty of laughs—and some tips for the kitchen."

According to Netflix, Waffles and Mochi are best friends who used to live in The Land of Frozen Food while pursuing their shared dream to become chefs. However, everything they cooked was made of ice, that is, until grocery owner Michelle hires them "as the freshest employees of a whimsical supermarket." "Whether they're picking potatoes in the Andes of Peru, sampling spices in Italy, or making Miso in Japan, these curious explorers uncover the wonder of food and discover every meal is a chance to make new friends," reads the Netflix description.

"I'm hopeful that this delightful show can bring a bit of light and laughter to homes around the world." — Michelle Obama

"In many ways, this show is an extension of my work to support children's health as First Lady—and to be quite honest, I wish a program like this had been around when my girls were young," Michelle wrote. "I also know that this is a difficult time for so many families, and I'm hopeful that this delightful show can bring a bit of light and laughter to homes around the world. That's why as part of the show's commitment to helping families during the pandemic, we're working with our partners at @PHAnews to get fresh ingredients to families in need across the country so they can cook together at home. So that's what #WafflesAndMochi is all about. I can't wait for you and your children to join us on our adventures."

Get a first look at Waffles + Mochi in the photos below, and be sure to catch the first season with your family when it hits Netflix on March 16!