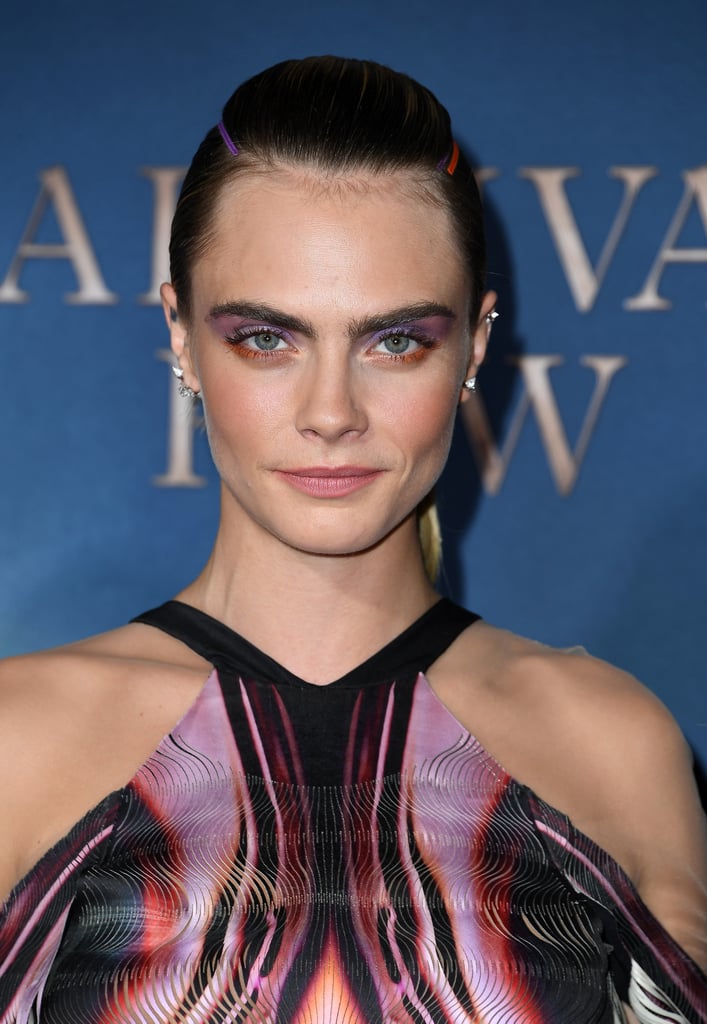 Yes, we're excited to watch Cara Delevingne's new series Carnival Row, but we're just as excited by her haberdashery hairstyle at the show's Los Angeles premiere. Hairstylist Mara Roszak created an architectural ponytail and added strips of ribbon to match the exact hues of the Delevingne's dress and eye makeup, and we're a little bit in love, to say the least.

Roszak created the look by scraping back Delevingne's hair into a low ponytail with the front section of her hair kept out of the pony, which she then twisted and secured at the base of the pony by another elastic. To secure the style, Roszak used three styling products: Davines OI Oil (£35), Davines Strong Moulding Clay (£17), and Davines Medium Hairspray (£19).

Then Roszak started to have some fun. Purchasing some thin orange and lilac ribbon from a craft shop in Los Angeles, she cut two strips and applied them on each side of Delevingne's hair: a lilac ribbon running along her right part and an orange and lilac one placed underneath the twisted hair. This small detail added colour and structure to an otherwise fairly simple hairstyle.

Although Roszak didn't specify the exact inspiration behind it, the hairstyle could have been inspired by Delevingne's character in Carnival Row, Vignette Stonemoss, who wears wings with very structured and intricate panelling. The colours of the ribbons also matched Delevigne's eye shadow perfectly. Makeup artist Molly Stern applied a wash of shimmering lilac shadow all over Delevingne's lids and up to her gorgeous brows, and then placed bright orange shadow along her lower lashes, dragging it out past the outer corners into a subtle wing.

This isn't the first time Roszak and Delevingne have played around with decorated partings for the red carpet. Roszak's previously experimented with teeny tiny parting braids and glitter, both of which turned supersimple styles into intricate, structured ones that took us a minute to realise it was even there.

Read on to get a closer look at every angle of Delevingne's architectural, ribbon-decorated ponytail at the Los Angeles Carnival Row premiere, and you might even get inspired to look for hair accessories in the craft store yourself.

Award Season
BAFTA Awards 2021: The Best Celebrity Hair and Makeup Looks of the Night
by Sophia Panych 1 hour ago