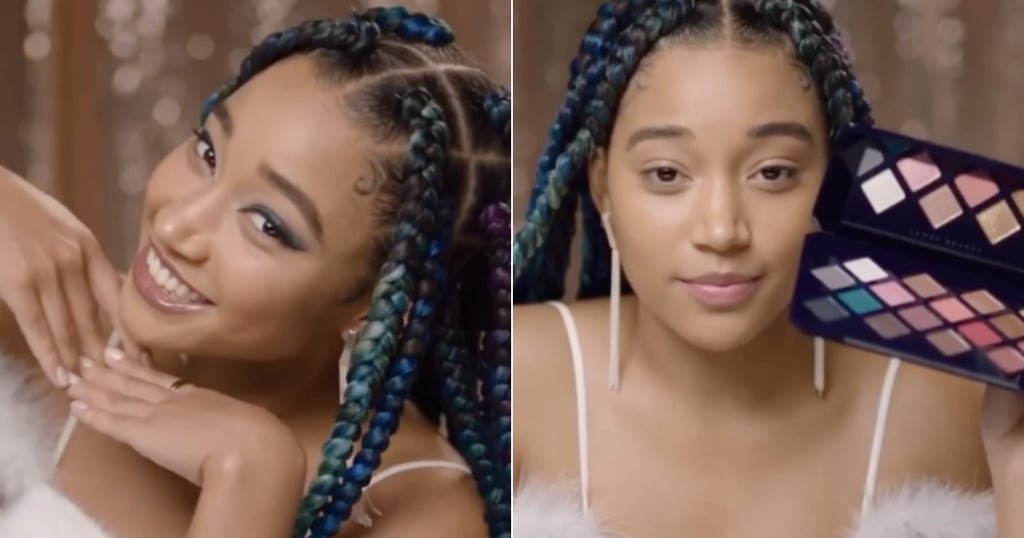 Search no more for your perfect New Year's Eve makeup because Amandla Stenberg just served up both inspiration and a tutorial for us to admire and re-create.

The actor became an ambassador for Fenty Beauty back in May and has since served plenty of beautiful campaign images, as well as tutorials as part of the collaboration. But they were certainly saving the best tutorial until the end of the year. Stenberg dropped a New Year's Eve tutorial on Dec. 8, which featured a beautiful blue smoked eye makeup. The tutorial also resulted in the look being used in the newest Fenty Beauty shoot, and the outcome was (unsurprisingly) stunning. Rhianna — founder of Fenty Beauty — was obviously a fan, too and commented on the look "Love a multifaceted Kween!"

Of course, her eye makeup was the star of the show. So much so, that she even matched her braids to the eye-shadow palette. Stenberg used the two blue shades from the Moroccan Spice Eye Shadow Palette (£21) to create a smoky eye that stretched toward her temples. She then used Flyliner for her sharp winged liner, which pulled the whole look together. Aside from the eye makeup, other key products she used were Pro Filt'r Hydrating Primer (£24), Pro Filt'r Hydrating Foundation (£27), and Mattemoiselle Plush Matte Lipstick in I Quit (£16).

Not only were fans raving about how beautiful the NYE look was, but they were also asking Amandla to spill the secrets of her skincare routine — here's hoping that's the next tutorial she drops.

Award Season
BAFTA Awards 2021: The Best Celebrity Hair and Makeup Looks of the Night
by Sophia Panych 1 week ago