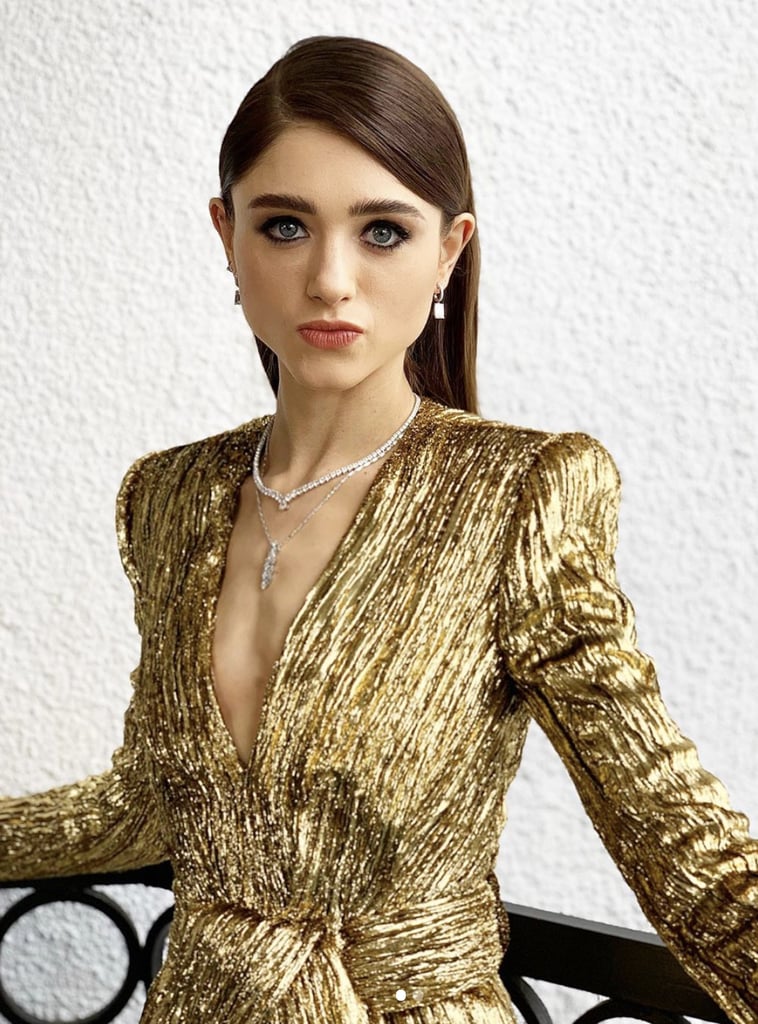 As most Stranger Things fans will know, the Netflix series never disappoints — and neither does the show's cast when they hit the red carpet. While Noah Schnapp looks dapper in a Balmain suit and Millie Bobby Brown rocks a beauty look that costs almost half your rent, it's Natalia Dyer whose red-carpet look really left us impressed.

Dyer, who plays Nancy Wheeler in Stranger Things, arrived to the SAG awards alongside long-time boyfriend and costar, Charlie Heaton. Of course, Dyer stole the spotlight immediately. Not only was her hair smoothed to perfection (courtesy of hairstylist Marc Mena), but her brows were also polished, her lips painted with a perfectly pouty stain, and her eyes expertly lined with a smoky eyeliner. But when we spoke with her makeup artist Fiona Stiles about the look, we never guessed it would be so easy to copy. In fact, most of the products Stiles used on Dyer are ones you probably already own.

As far as the inspiration goes, Stiles said that it was Dyer's Saint Laurent dress she used as her muse. "It reminded me of a Joan Crawford column dress with the padded shoulders," Stiles explained to POPSUGAR over the phone. "I wanted to keep that sense of structure with Natalia's look." Stiles said that she only saw the dress, styled by Brad Goreski, earlier this weekend, but immediately knew she wanted a rocker meets glam makeup look to match. Due to the boldness of her "feral brows" (Dyer's words, recalls Stiles) and smudged eyeliner, Stiles wanted to keep Dyer's skin glowing and fresh, so she used a damp sponge to tap the Kosas Tinted Face Oil onto her face.

Dyer also noted that she didn't want the typical glamorous red lip look, so Stiles instead opted for a natural, her-lips-but-better pink. "I didn't want the lipstick to compete with her other features. I wanted it to look like her natural lip colour," said Stiles. So, she mixed Kosas Weightless Lip Colour in Vegas with Rosewater to create a softer pigment. She then topped it off with Kosas Wet Lip Oil Gloss in Jellyfish to add dimension to the look.

Stiles' goal for the night: to create makeup that appeared three-dimensional even under the bright lights of the red carpet. She particularly relied on the Kosas Colour & Light Cream Blush in Tropic Equinox to do this. "These cream blushes have been some of my favourites for years," Stiles explained. "Tropic Equinox is a pretty warm bronze-y colour. I love using blush, highlighter, and contour to create a three-dimensional cheek." Now, please, excuse us while we go brush through our own brows trying to copy this entire look.

Makeup
Tower 28 Beauty, the LA-Based Makeup Brand for Sensitive Skin, Has Finally Arrived in the UK
by Sophia Panych 1 day ago