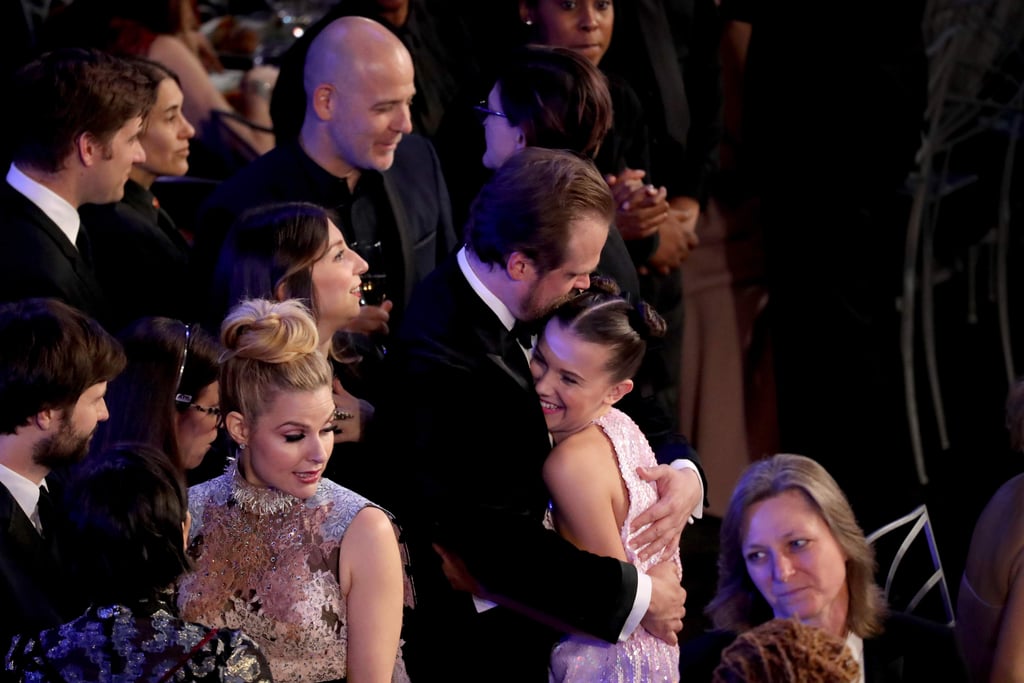 So, um, is it socially acceptable to set a picture collage of two complete strangers you've never met before as your phone background? Because that's what I just did after seeing a few snaps of David Harbour and Millie Bobby Brown at the SAG Awards together, and I don't care who knows it. The Stranger Things costars reunited during the award show and looked like the adorable Eggo-eating father-daughter duo we came to know and love during season two of the Netflix series — except, ya know, in way fancier clothes. Eleven — er, Millie — shed her "bitchin'" all-black outfit from the season finale in favour of a light-pink dress and Converse trainers, while David swapped his hugs-in-all-the-right-places police chief uniform for a dapper tuxedo.

Before the show began, David chatted with People magazine on the red carpet about how he wants to protect Millie in real life just as much as Jim Hopper does on screen with Eleven. "I'm hopeful she'll get to grow up in a place where they'll tell her stories more," he said. The actor also commented on how he believes Millie will "grow up in a better Hollywood than we did" because of movements like #MeToo and Time's Up.

During the SAG Awards, the dynamic duo shared an adorable hug, and I'm feeling forever indebted to the talented photographer who captured their sweet embrace. Ahead, see all the picture-perfect footage of Millie and David's SAG Awards reunion, and you'll certainly be left itching for season three of Stranger Things (and maybe even equally inspired to change your phone background, TBH).