American Idol contestants are pretty much all guaranteed to walk away from their experiences on the show with a pretty decent story to tell, though not very many will ever be able to say that they got to audition with one of the judges like Ethan Payne did. The 15-year-old appeared on the show on March 6, and what started out as a standard audition turned into a full-on duet with judge Luke Bryan.

Payne revealed before his audition that he was diagnosed with cystic fibrosis at just 18 months old. Years after his diagnosis, he made a request through the Make-A-Wish Foundation to meet Bryan, his idol. His dream eventually came true in 2016 when the country singer not only invited him to a meet-and-great ahead of one of his shows in Dallas, but he also later invited Payne to sing on stage with him in front of thousands of his fans. Fast forward to the present, and Payne basically got to relive that moment during his emotional American Idol audition. 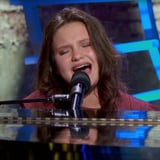 The Macon, GA, native turned up to his audition with the exact guitar Bryan gave him after their performance before requesting some vocal assistance from him. "He came to Texas to show me up, now he done come to American Idol to show me up," Bryan said before the two began beautifully performing his song "Do I" for the other judges. Not surprisingly at the end of his audition, Ethan received a standing ovation from Katy Perry and Lionel Richie and was sent through to Hollywood. Watch the full video of his audition above!