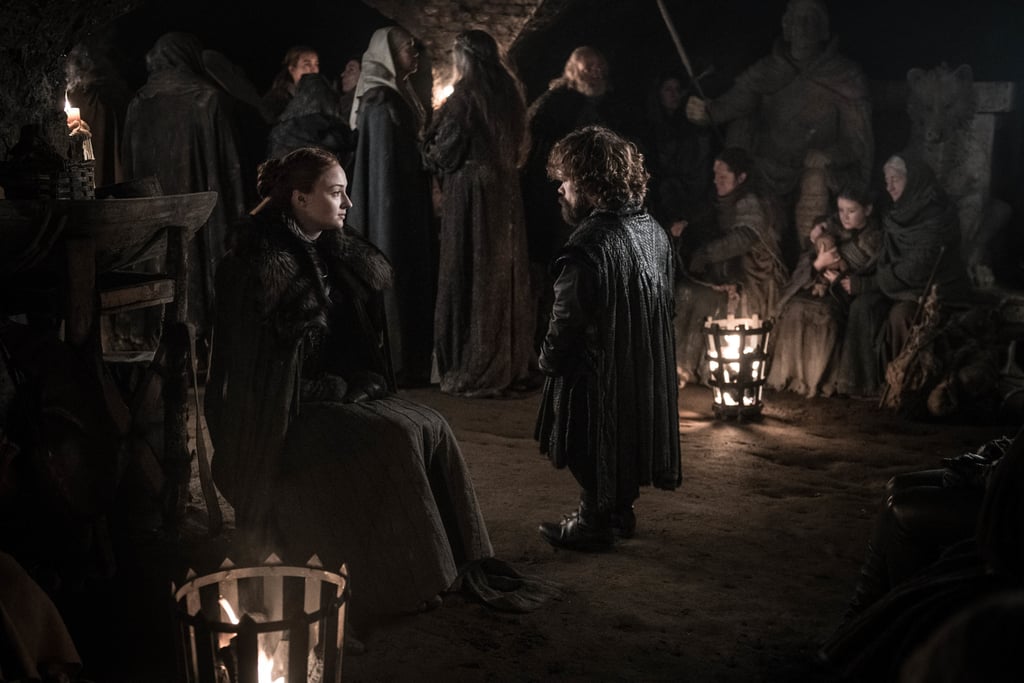 Warning! Huge spoilers about the latest episode of Game of Thrones are ahead, so if you aren't caught up, stop reading ASAP.

To say that Tyrion Lannister and Sansa Stark have a complicated history is an understatement, but the pair share a special interaction in the latest episode of Game of Thrones. Their reunion at Winterfell in the final season marks the first time they've seen each other since they attended Joffrey's wedding in season four, which is also the occasion when Joffrey dies and Sansa flees King's Landing. As you may remember, Tyrion and Sansa tie the knot earlier that season, and we get a callback to that relationship in the latest episode.

When the pair see each other for the first time in season eight, their conversation is pretty buttoned-up, both of them playing their cards pretty close to the chest as Sansa tells Tyrion he's not as clever as she'd thought if he truly believed his sister would send her army North. Once they find themselves in the Winterfell crypts together, though, facing what may very well be the end of the living, Sansa and Tyrion seem to have warmed up a bit — or perhaps it's all the wine Tyrion's been drinking? — and they share a few surprising, heartfelt moments.

As the battle rages on, Tyrion begins to feel helpless down in the crypt, and he stands as if he plans to go out and fight. Sansa tells him, "None of us can do anything. That's the truth. That's the most heroic thing we can do now: look the truth in the face." He's taken aback and jokes, "Maybe we should've stayed married." Sansa smiles and tells Tyrion he was "the best of them," but assures him that things wouldn't work between the two of them because of their divided loyalties, hers to the North and his to Daenerys Targaryen.

Later, when — how do I put this — sh*t's really going down, after the White Walkers have stormed into Winterfell and the Night King has raised the dead from within the crpyts, Sansa and Tyrion find themselves hiding together, terrified. They stare at each other for a long moment, Tyrion eventually grabbing his flask as Sansa grabs the dagger given to her by Arya. Perhaps, like me, you were screaming at your TV, horrified in believing they might be silently making some sort of suicide pact. Fortunately that isn't the case; instead, they're quietly agreeing to stand up and do what needs to be done. Even more fortunately, Arya takes care of business — as in, The Night King — quickly enough that they both survive, along with some of the others who stayed in the crypts.

After all that Tyrion and Sansa have been through, both together and separately, it's touching to see them come together in moments of shared respect. Their dynamic (and lighthearted sarcasm) brings a welcome bit of heart to an episode that's otherwise action on action, and we'll just have to see where their "divided loyalties" lead them as the group deals with their next situation: Cersei.

Keep reading to see how Twitter responded to Tyrion and Sansa's interactions in "The Long Night," then relive the biggest moments from the episode.

Related:
Wondering Who Dies in the Battle of Winterfell? Here's a Handy, Heartbreaking Guide
Previous Next Start Slideshow
Twitter ReactionsGame Of ThronesTV