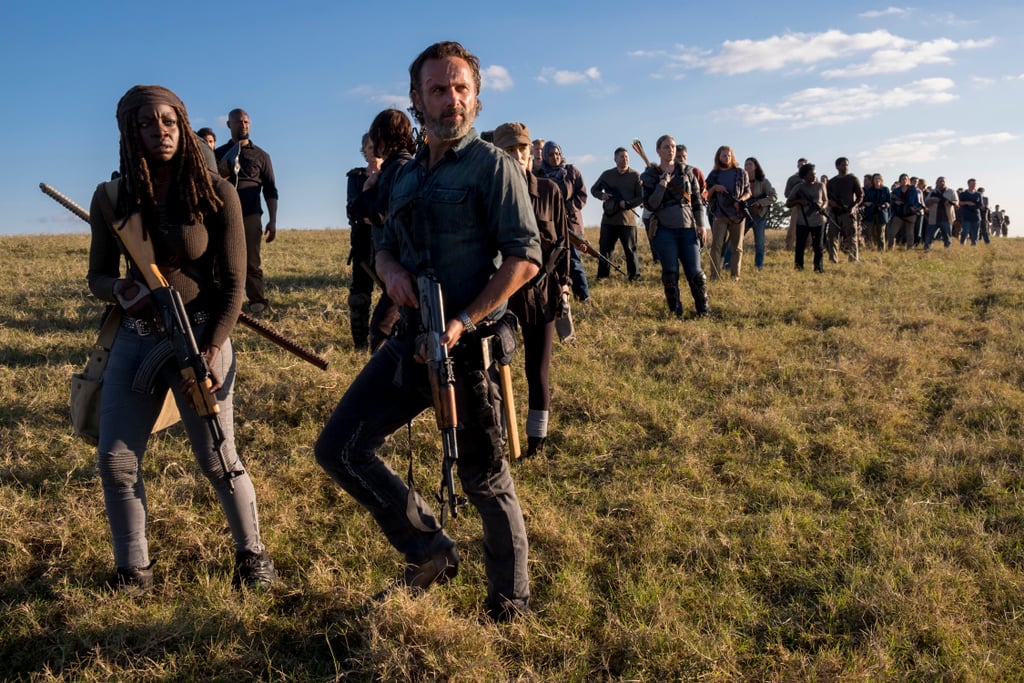 Spoilers for The Walking Dead's season eight finale below!

Well you guys, we did it — we survived until the end of The Walking Dead's seemingly never-ending "All-Out War" storyline. The long-awaited conclusion to season eight finally reached its climax on Sunday night, and the episode definitely takes some unexpected turns. In a refreshing twist, none of the major characters die, which as any TWD fan knows, is a rarity. Instead, we only have to say goodbye to Morgan (Lennie James), who's venturing over to Fear the Walking Dead. That's not to say things don't get bloody, though.

Although the Alexandria and Hill Top communities are outnumbered by the Saviors, they get a surprising reprieve in the form of Eugene (Josh McDermitt), who it turns out has been making defective ammunition for Negan at the Sanctuary all this time. This allows our heroes to prevail, and results in a face-to-face interaction with Rick (Andrew Lincoln) and Negan (Jeffrey Dean Morgan). The final tussle between the enemies closely mirrors what happens in the comics: when Rick is finally given the opportunity to end Negan's life, he decides to spare him. In the show, it's because Rick is moved by the touching sentiments expressed in the letter from his late son, Carl, which basically begs him to aspire to a life of "something more."

Does Rick obey his dead son's wishes? Sort of. He slits Negan's throat, but ensures it's not a fatal blow so he can keep him alive as a reminder of the new type of community they want to build. That, naturally, doesn't sit well with Maggie (Lauren Cohan), Daryl (Norman Reedus), or Jesus (Tom Payne), which hints that there might be some serious clashes next season.

So, what happens after the war? We have until October to figure it out. Fortunately we have plenty to distract us in the meantime thanks to The Walking Dead fans on Twitter, who had no shortage of hilarious reactions to the episode. See the best ones below!