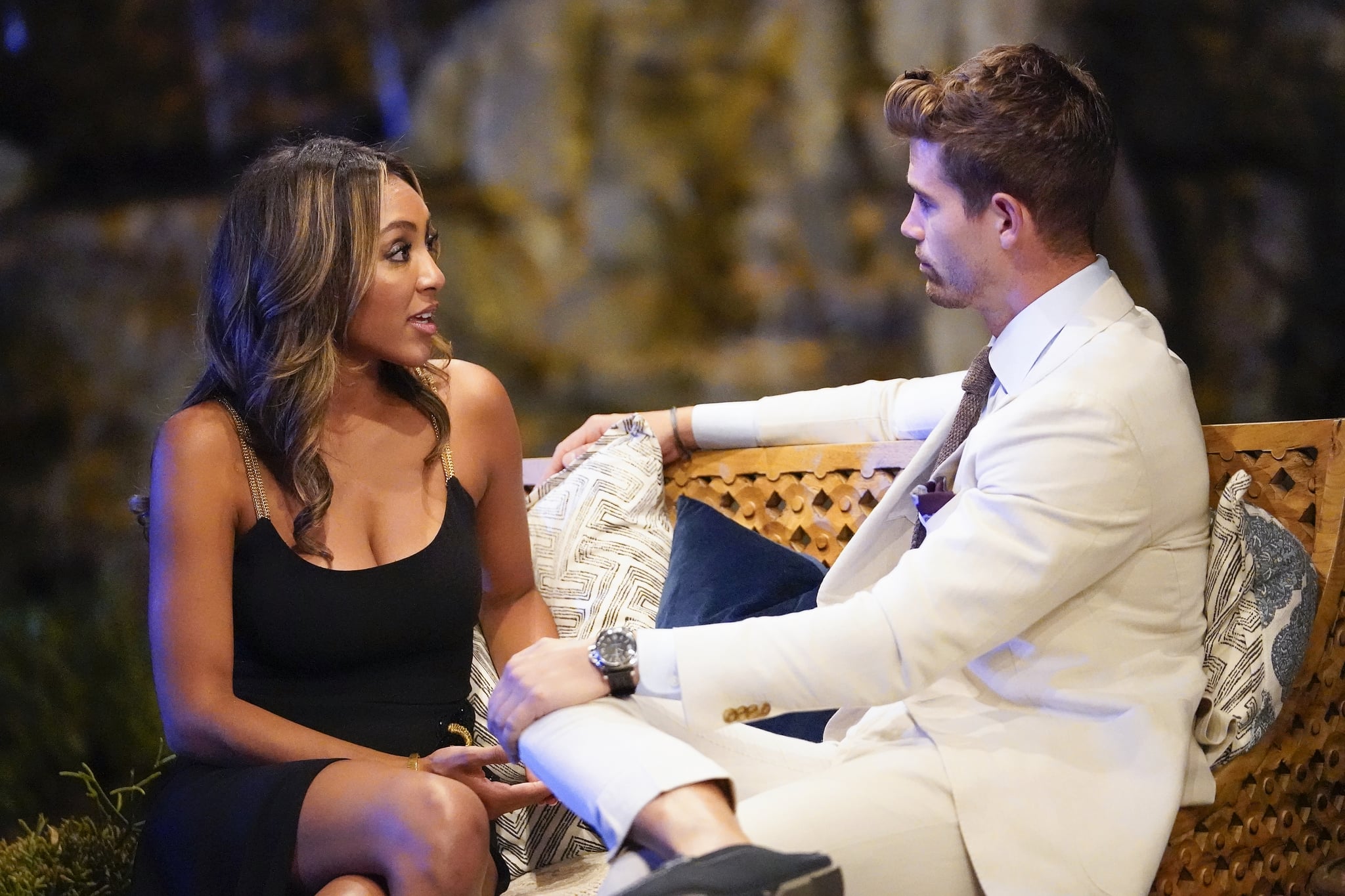 The Bachelorette is used to tons of drama between the guys, but Tuesday night's episode really took things to a new level of petty between Ed and Chasen. Trying to recap this drama really is an exercise in schoolyard name-calling with a dash of The Bachelorette's patented "not here for the right reasons" accusations, so let's get to it.

The actual reason for Chasen and Ed's beef really is never quite made clear; it comes across like they just don't like each other. Following a group date, Ed seems convinced that Chasen is a "fraud and phony...[spinning] a web of deceit," as he colorfully puts it. Bennett certainly doesn't help matters by trying to call Chasen out, which then results in Chasen's hilariously juvenile rebuttal: insulting Chasen for having "chicken legs." Of course, Ed's next move is to complain directly to Tayshia and confide to her that he doesn't think Chasen is... you guessed it, "here for the right reasons."

"I just want to make sure that whoever you choose out of the guys here is someone who's genuinely here for the right reasons and not for the Instagram followers," Ed tells Tayshia, warning her that he thinks Chasen isn't the real deal. The rest of the confrontation goes about how you'd expect: Tayshia asks Chasen about the accusations, Chasen swears he's for real, and he and Ed start yelling at each other again. They only stop when the group date is ended by Tayshia giving out the rose for the date.

The next night, though, Chasen is ready to throw down again. "I was very close to bringing my inner Wolverine out last night because of what happened with Ed," Chasen tells the camera. "I'm going to address it tonight in front of all the gentlemen and squash it." Ed gets to Tayshia first, complaining again about Chasen's behaviour. This time, when Tayshia pulls Chasen aside, she makes it clear she's had enough, telling him, "This stuff is so petty to me." It seems to be a wake-up call for Chasen, who apologises for being aggressive to Ed. Although Ed doesn't seem willing to accept the apology, they at least don't start another fight.

It's not over yet, though! The next group date — which also includes both Ed and Chasen — is a literal wrestling match. Ed's savvy enough to realise right away that the producers are going to pair him up with Chasen to capitalize on the previous drama. Instead, he withdraws from the "tournament," explaining that his shoulders chronically dislocate and he doesn't want to risk injury. The visual of these two rivals literally fighting it out in a wrestling ring never comes to be, but the high drama doesn't seem likely to end anytime soon!