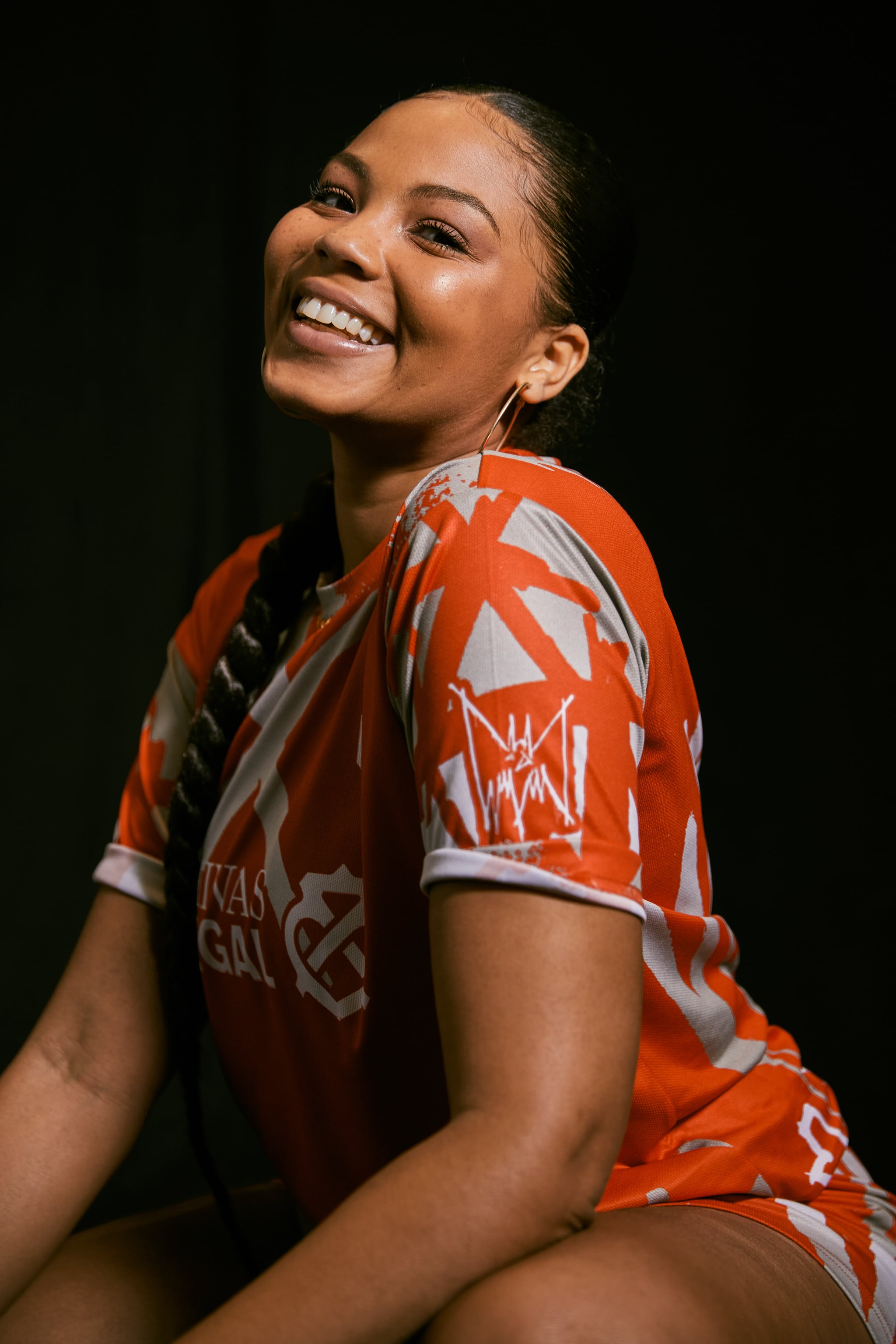 The women's Euro 2022 tournament is taking place in July next year, and it's set to be the biggest game in European history. So why aren't people talking about it? Women's football is a sport that's often been overlooked, underrated, and underfunded, but that's finally about to change. Presenter Joelah Noble has been working with whisky brand Chivas Regal as part of its Regal FC tournament, which aims to spotlight those ripping up the rulebook and redefining what football means to them. We caught up with Noble to talk about her career in presenting, playing football with Headie One, and what still needs to change to make sport accessible for women.

POPSUGAR: Tell us a little bit about how you got started with presenting.
Joelah Noble: I've always been super nosy and super chatty, and I've always enjoyed meeting new people. Initially, I really wanted to get into acting, and it's still something I really love and something I still do, but I just felt at the time that presenting was something that came naturally to me. With acting, you need to do all the classes and you've got to do that extra work, and as a perfectionist, I didn't want to go into it without it being perfect. I've learned along the way though that presenting certainly isn't easy either! I was in a job that I absolutely hated and I was a PA to someone, someone really nice, but I hated the actual job. I just needed an excuse to get out of that job and say that I was doing something else. At the time, presenting was the easiest thing for me to do on my own.

PS: Was there a moment where things changed for you and you knew that presenting was the way forward?
JN: There's a couple of things I'd say that changed the direction I was going in. The first thing was definitely an online magazine that I created. That was my excuse to leave my job, because I said [to myself], "I'm entrepreneurial and I'm creating this online magazine, and it's going to be great". In truth, it was bootleg. It looked horrible, but it was my opportunity to interview people and really work on my skills. That was the first thing that allowed me to really get out there and learn the skill of presenting and become more confident in front of a camera. The other thing that really took me to a different level at the time was when I did the GRM daily news. I did that every week for a couple of years, and I think that being on such a big platform and for people to see me on a weekly basis talking about things that I really cared about during that time was a great opportunity.

"Whenever there's an opportunity for me to play or for me to support other female footballers, then I'm definitely going to be there to do that.

PS: That must've been amazing. You've mentioned working in music and presenting, but was sport something you always wanted to get involved in?
JN: Sport was actually never something that I looked at and said, "Yeah that's me, I see myself talking about sports", but now that I'm doing it, I don't know why I'd never considered it before. I'm so competitive. It's like a running joke in my family. We're all so competitive. I've definitely knocked over Monopoly boards, Scrabble boards, chess boards, all of that. I love the community of sport, and I admire what it takes to be an athlete. I'm so intrigued by that, so it's actually perfect that I get to talk to football players as part of my job.

PS: Definitely. Now, you're working with Chivas Regal ahead of the women's Euro 2022 next year. What can you tell us about that?
JN: We played a tournament, and that whole experience was so much fun, having the opportunity to be with other like-minded individuals from different backgrounds, being able to come together and have a community experience. Elz The Witch was there and I love her. Henrie was one of the hosts on the day, too, with Poet, Vuj, and Young Philly. It felt like a day out, like when you're in school and you're going on a school trip or you're all excited by it — that's genuinely what it felt like.

PS: That sounds like a lot of fun. What was it like to play with Headie One?
JN: We actually played against each other. I say I'm competitive, but that doesn't mean that I'm actually good at the game of football. I'm really quite bad. Our team went out on the first match, but we tried really hard, and you know what? It was close. It was really close. I will say that. The play was so entertaining though. Headie really goes for it. Maybe in a past life, he was a footballer . . . 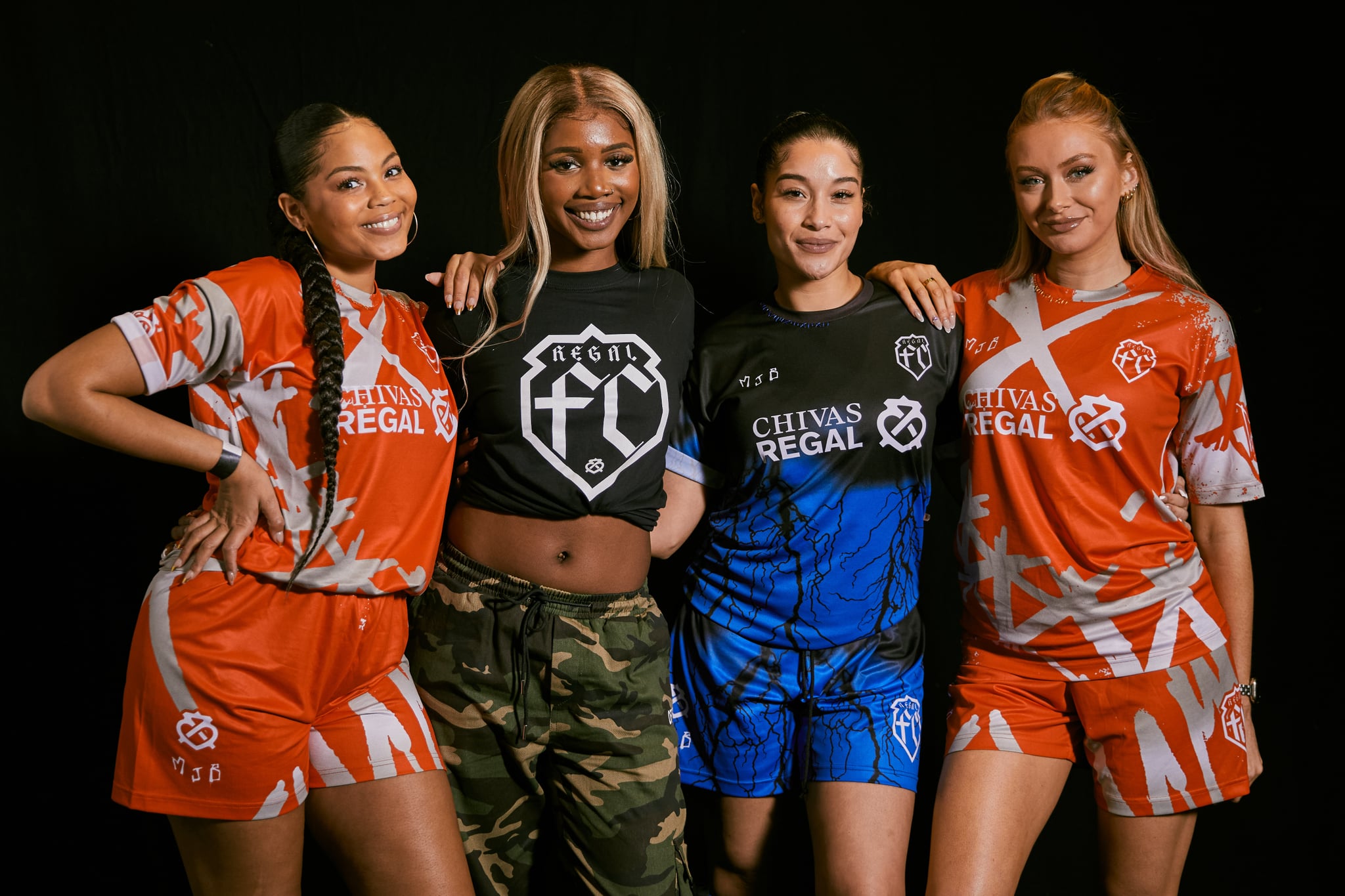 PS: The women's Euro 2022 takes place next year. How important is it for you to be championing women's football specifically?
JN: As a woman in football, it's super important. I see the difference in visibility for women's football and men's football, and I would like to try and level out that playing field a bit or play my part as best as I can. Whenever there's an opportunity for me to play or for me to support other female footballers, then I'm definitely going to be there to do that.

PS: What do you think still needs to change to make the sport more accessible for women?
JN: Initiatives like this Regal FC one. I think this initiative is something that will have young girls scrolling on their Instagram and watching a group of influencers and musicians and people that they look up to having fun with the sport. They can know that it doesn't have to be taken super seriously. They don't have to be competing in the Euros, or they can compete in the Euros if they want! The visibility is so important just so that the young girls can see themselves represented in the teams that they're looking at.

PS: Definitely. Sport and music are often quite male-dominated industries to be in. What's helped you to feel more comfortable and more powerful in those spaces during your career?
JN: I don't go in feeling like, "Oh my gosh, I'm the only woman here". I mean, there might be a couple of times where a guy walks in and they're like, "Hey gents" or "Hey guys, and lady". I just make sure that I go in and do my job. I make sure that I do my research I need to do beforehand. Because if I've done my research, I feel confident about it, and that shines through. That's really how I hold my own. I'm confident and I'm authentic with it, because I'm there for a reason.

PS: What advice do you have for young women who don't feel like sport, and football in particular, are for them?
JN: First of all, I'd ask, "Have you tried it?" Because if you haven't, why not? If football is not the thing, then you can try other sports. I know the idea of being sweaty and smelly sometimes isn't cute, but there's so much more to sport and football than just being sweaty. It's all about that community, having those experiences, and being a part of a family. There's also feeling what it feels like to take part in something great and potentially even winning. 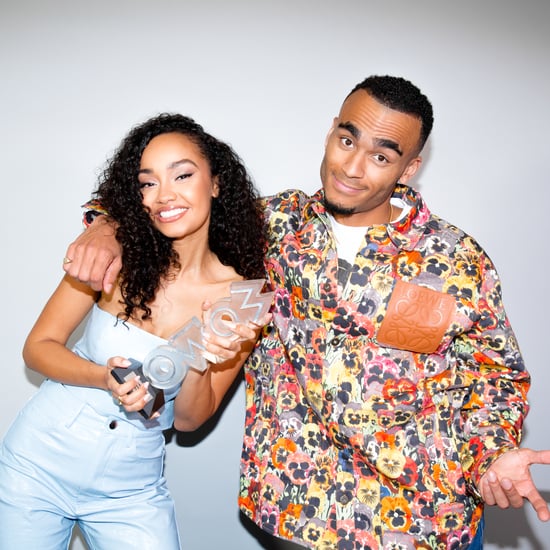 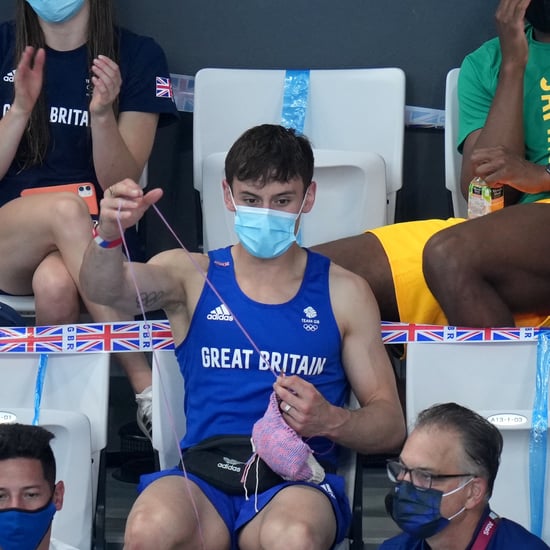 British Celebrities
Is Tom Daley Diving Into His Own Knitwear Line? No, But It's Pretty Damn Close
by Navi Ahluwalia 3 days ago